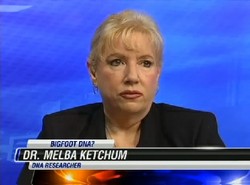 We are presently witnessing the present struggle of Dr Melba Ketchum to introduce her scientific DNA work into the science world. This represents the first serious DNA study of purported Bigfoot samples. This delivers a mass of unique data points and some conclusions that support the existence of a North American hominid. It may or may not be a human hominid hybrid and the mass of third party reports does support just that prospect, but it certainly a hominid confirmed over a wide spectrum of samples.

What is outrageous is the blanket of authoritative dismissive attacks turned against her and her work. She was ultimately was forced to accept publication in a faux journal just in order to share her report. If you can not take new work to a presently recognized journal because such a journal can not exist, it becomes necessary to make ad hoc arrangements such as she has.

The fact remains that she has the necessary skill set and she has chosen to gather the data for the first time for a proper study. This work can be replicated immediately and continuously as more samples flow in for testing.

My blog is very much about new science. Much of which I report on as work in progress can not reasonably be published because it certainly challenges present received knowledge and paradigms. Yet it is all valid work until fresh data arrives to discredit it. More compelling is that a new paradigm informs you to make new experiments and this delivers new data that builds on gthe original paradigm proposed.

A great and compelling example of this is Darwin's Origin of the species. It led to looking at the incoming data with new eyes and testing it in a different manner. A century and a half of fresh data has secured its august position as a key intellectual paradigm.

The central point here is that truly new science often does not have a platform. For that reason alone it struggles to be heard.

The whole field of cryptozoology has suffered from this neglect. That is why I began my manuscript titled Paradigms Shift with a recrafting of the fundamental rules for what is accepted and applied as scientific method. Believe me that I did not wish to begin a book with a chapter on philosophy but it needed to make sense of the later method and language used.

This whole brouhaha is one more example of just how flawed our primitive concept of scientific method happens to be. Melba Ketchum is practicing good science. Her critics are practicing ignorance and generally proud of it.

The upside is that we now have a stack of DNA sampled material that has totally supported the Bigfoot hypothesis as had to exist from the mass third party reports which number some ten thousand. It was frustrating to wait for someone to actually do this work but it has been indicated for years. It is now out there and more reports will also be done and opened to public review.

Name calling is a poor answer to lab work.

In the meantime i have been unable to download the paper but have seen parts.

How nice that our present NOT scientific establishment continues to demonstrate they are not scientists.

Archein, once again, I’d like to thank you for your blog and excellent posts. A number of scientists and other interested parties are having to post their studies and comments on Andrea Rossi's blog, the Journal of Nuclear Physics because, according to Rossi and his partners, the various journals he sent their work to on LENR, would not publish it either. I think it kind of cool. In a way knowledge is being open sourced and "freely" available instead of being held by various groups that require payment to have access to information. For the lay person it would require being members of all the various journals which is impractical and costly for most. I guess some folks want us to continue to believe that Christopher Columbus discovered America. LOL

I would also like to see another equally scientific paper submitted on the now proven anomolus but real human like skull that has had many mitocondrial and nuclear DNA tests that show it outside the human genome. ( See: Starchild skull. ) Much like the Bigfoot hominid acceptance, it too has been shunned .

There is a real need for a venue to publish original research that is simply not been published because it is challenging a paradigm.

I would be happy to use my blog as that venue with a simple codecil.

That the presenting researcher engages in a verbal presentation to explain his ideas and takes questions from interested parties.

This way there is some chance that peers will be able to find their way into the work itself and be able to openly discuss failings.

Melba has been doing just that and that allows the key findings to be understood in terms of the weight placed no them by the researcher. In Melba's case, she tested over one hundred samples which inevitably also tested garbage. It is not hard to verbally weigh those samples and emphasize those to be fully trusted.