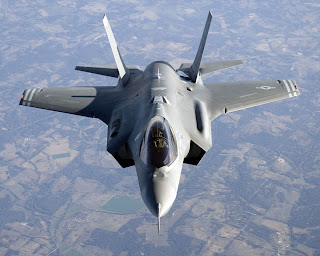 The moment of truth is arriving for this bird and it is not particularly promising. I will also argue that it is also unnecessary.

Drone technology is advancing in leaps and it is just too huge an advantage to get rid of the on board pilot to not think that is exactly what is about to happen. We need to build a hot drone fighter that is able to blow everything out of the sky long before China or anyone else does.

From this article, it is clear that the real fight has begun for this bird. Canada has already canceled their participation and it is a gimme that others are thinking it through. Expect more and expect a final cancellation however unpleasant that may be.

What is flying today can carry us forward into the age of fighter drones quite handily.

In an interesting piece by Flight’s Dave Majumdar, Bill Flynn, Lockheed test pilot responsible for flight envelope expansion activities for the F-35, claimed that all three variants of the Joint Strike Fighter will have better kinematic performance than any fourth-generation fighter plane with combat payload, including the Eurofighter Typhoon (that during last year’s Red Flag Alaska achieved several simulated kills against the F-22 Raptor) and the Boeing F/A-18E/F Super Hornet.

“In terms of instantaneous and sustained turn rates and just about every other performance metric, the F-35 variants match or considerably exceed the capabilities of every fourth-generation fighter,” Flynn said.

According to the Lockheed pilot, (besides its stealthiness) the F-35 features better transonic acceleration and high AOA (angle-of-attack) flight performance than an armed Typhoon or Super Hornet.

As Majumdar says in his article, such claims are strongly disputed by other sources. Among them an experienced Eurofighter Typhoon industry test pilot, who tried to debunk all Flynn’s “theories” about the alleged superior F-35 performance.

Here’s what he wrote to The Aviationist:

No doubt the F-35 will be, when available, a very capable aircraft: its stealth design, extended range, internal carriage of stores and a variety of integrated sensors are definitely the ingredients for success in modern air-to-ground operations.

However, when time comes for air dominance, some other ingredients like thrust to weight ratio and wing loading tend to regulate the sky. And in that nothing comes close to a Typhoon, except an F-22 which has very similar values. The F-35 thrust to weight ratio is way lower and its energy-maneuverability diagrams match those of the F/A-18, which is an excellent result for a single engine aircraft loaded with several thousand pounds of fuel and significant armament.

But it also means that starting from medium altitude and above, there is no story with a similarly loaded Typhoon.

Dealing with the transonic acceleration:

Transonic acceleration is excellent in the F-35, as it is for the Typhoon and better than in an F/A-18 or F-16, but mainly due to its low drag characteristics than to its powerplant. That means that immediately after the transonic regime, the F-35 would stop accelerating and struggle forever to reach a non operationally suitable Mach 1.6.

The Typhoon will continue to accelerate supersonic with an impressive steady pull, giving more range to its BVR (Beyond Visual Range) armament.

For what concerns AOA:

Angle-of-attack is remarkably high in the F-35, as it is for all the twin tailed aircraft, but of course it can not be exploited in the supersonic regime, where the limiting load factor is achieved at low values of AoA.

Also in the subsonic regime, the angle-of-attack itself doesn’t mean that much, especially if past a modest 12° AoA you are literally going to fall of the sky! Excessive energy bleeding rates would operationally limit the F-35 well before its ultimate AoA is reached.

Last, the F-35 is capable of supersonic carriage of bombs in the bomb bay, but the fuel penalty becomes almost unaffordable, while delivery is limited to subsonic speeds by the armament itself as is for the Typhoon.

[...] it is in the facts that while the Typhoon can do most of the F-35 air-to-ground mission, vice versa the F-35 remains way far from a true swing role capability, and not even talking of regulating the skies.
Provided that the F-35 will be able to solve all its problems, and that the raising costs will not lead to a death spiral of order cuts, both the British RAF and the Italian Air Force will be equipped with both the JSF and the Typhoon.

The F-35 Folly: How Our Own Fighter Jets Are Killing Us


This is a story about political dysfunction in Washington.

The F-35 joint strike jet fighter is one of the costliest weapons programs in human history, with each plane costing $90 million and the project taking more than a decade to complete.

The price tag of the entire program has nearly doubled since 2001, coming in at a staggering $396 billion dollars. And, thanks to a number of production delays and safety concerns, that price tag is still rising.

When you combine the price tag of the program with Government Accountability Office estimated operating and maintenance costs of the planes– the total cost of the program reaches over $1 trillion.

And here's the really tragic and absurd part of this story. Thanks to the decade of delays, the technology in the F-35, once thought to be the best of the best, is now outdated.

The F-35 program is one of several in the current Pentagon budget that is stuck in the last century, and has failed to adapt to changes in modern day warfare.

Yet, Pentagon officials, like current Secretary of Defense Leon Panetta, are still pressing for nearly 2,500 of these absurdly expensive and already-obsolete F-35 Joint Strike Fighters.

At a press conference in Ottawa, Canada last Spring, Panetta told reporters that, “As part of the defense strategy that the United States went through and has put in place, we have made very clear that we are 100 percent committed to the development of the F-35. It’s a fifth-generation fighter, [and] we absolutely need it for the future.”

What Panetta didn't point out is that over the course of the F-35 program, the world has changed. The F-35 is supposed to be the future of U.S. tactical airpower, but the fact is the entire program is a relic of the Cold War. Rather than face the current threats of today, like cyber warfare, we continue to pour billions, and potentially trillions, into the bottomless pits of projects like the F-35.

Cue Republican war hawks like Sen. Lindsey Graham. Appearing on Fox News Sunday over the weekend, Graham said that, in order to avoid the looming sequester budget cuts that would, he said, "destroy" the military , we should instead eliminate healthcare to the 30 million Americans who are covered under Obamacare.

Instead of taking healthcare away from millions of Americans, lawmakers in Washington should kill the zombie of the F-35.

The Pentagon is facingt $500 billion in budget cuts if the sequester goes into effect. And, amazingly, that's about the amount left in the Pentagon budget for the F-35.

The fact of the matter is eliminating the F-35 Joint Strike Fighter program really won’t put a dent in America’s military power.

As Congressman Justin Amash of Michigan, one of the few Republicans in favor of defense cuts, put it, quote, “We are spending maybe 45% of the world's budget on defense. If we drop to 42% or 43%, would we be suddenly in danger of some kind of invasion?”

But it would put a dent in the wallets of America’s war profiteers, which really concerns Republicans who are heavily funded by them, people like Senator Lindsey Graham.

And they sure can afford to fund Graham and his congressional buddies. In the past ten years, the defense industry has seen record profits.

In 2011, the combined profits of the five largest U.S.-based contractors were a staggering $13.4 billion. And, despite going through a recession that devastated both families and business across the country, the defense industry is still making record profits.

FDR said during World War II that, "I don't want to see a single war millionaire created in the United States as a result of this world disaster.”

But, in this new age of never-ending war, war profiteers are cashing in like never before. Glance across the Potomac from our nation’s capital, and you'll see virtual castles – thirty and forty room mansions in secure, gated communities - all belonging to the executives and lobbyists of today's war profiteers.

And thanks to these war profiteers and the Republican war hawks they own, it’s ingrained in the American psyche that any decrease in military spending means an automatic increase in the danger that Americans face in their everyday lives.

America is the strongest military power in the world. And that’s not going to change anytime soon.

But while our defense contractors are prospering, working people across America are hurting. Schools and infrastructure are in shambles. We're slipping behind the rest of the developed world in virtually every available measure of national health and wealth.

It’s time to ground the F-35 Joint Strike Fighter program and other wasteful defense spending projects for good, and use that money to rebuild our economy, and to rebuild the middle class.
Which is the true investment in our future security.

Copyright, Truthout. May not be reprinted without permission of the author.
Posted by arclein at 12:00 AM