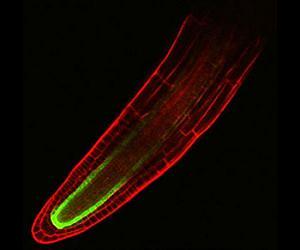 Thus gives us an actual understanding of just how the root goes dormant and points us toward actively managing it.

As it is also plausible that biochar dressing locks up the unwanted salt ions, it is possible that it will be possible to reclaim irrigation wreaked soils with a combination of protocols. Ideally one such protocol can actually collect the toxic salt. Here we are beginning to see the road map.

As posted before, biochar allows direct sequestration but does not remove. That may well be good enough but likely troublesome as the ions will still alter surrounding soluble chemistry somewhat.

This is a confocal microscope image of a branching root (lateral root). The cell boundaries are in red and the the GFP fluorescent signal marks the endodermis. Credit: Image courtesy Jose Dinneny.


Until now it has not been clear how salt, a scourge to agriculture, halts the growth of the plant-root system. A team of researchers, led by the Carnegie Institution's Jose Dinneny and Lina Duan, found that not all types of roots are equally inhibited.

They discovered that an inner layer of tissue in the branching roots that anchor the plant is sensitive to salt and activates a stress hormone, which stops root growth. The study, published in the current issue of The Plant Cell, is a boon for understanding the stress response and for developing salt-resistant crops.

Salt accumulates in irrigated soils due to the evaporation of water, which leaves salt behind. The United Nations estimates that salinity affects crops on about 200 million acres (80 million hectares) of arable land and not just in developing countries, but areas such as California as well.

As Dinneny explained: "An important missing piece of the puzzle to understanding how plants cope with stressful environments is knowing when and where stressors act to affect growth."

Roots are intimately associated with their environment and develop highly intricate branched networks that enable them to explore the soil. The branching roots grow horizontally off the main root and are important for water and nutrient uptake.

The scientists grew seedlings of a laboratory plant (Arabidopsis) that is a relative of mustard using a custom imaging system, which enabled them to measure the dynamic process of root growth throughout the salt response.

This ability to track root growth in real time led the scientists to observe that branching roots entered a dormant phase of growth as salt was introduced. To determine how dormancy might be regulated, Lina Duan surveyed the role of different plant hormones in this process and found that Abscisic Acid was the key signaling molecule.

"We are familiar with how animals use a fight or flight strategy to face external challenges. While plants can't run for safety, they can control how much they grow into dangerous territory," commented Dinneny. It turns out that Abscisic Acid, a stress hormone produced in the plant when it is exposed to drought or salty environments, is important in controlling the plant equivalent of fight or flight."

To understand how Abscisic Acid controls growth, the investigators devised a strategy to inhibit the response to this hormone in different tissue layers of the root. They developed several mutants in which the response to the hormone was suppressed in different root layers. They found that a significant portion of the salt response was dependent upon how a single cell layer sensed the hormone. The live imaging allowed them to watch what happened to root growth in these mutant plants.

"Interestingly, the 'inner-skin' of the root, called the endodermis, was most critical for this process. This tissue layer is particularly important as it acts like a semipermeable barrier limiting which substances can enter the root system from the soil environment." remarked lead author Duan.

"Our results mean that in addition to acting as a filter for substances in the soil, the endodermis also acts as a guard, with Abscisic Acid, to prevent a plant from growing in dangerous environments," said Dinneny.

"Irrigation of agricultural land is a major contributor to soil salinity. And as sea levels rise with climate change, understanding how plants, particularly crops, react to salt might allow us to develop plant varieties that can grow in the saltier soils that will likely occur in coastal zones."