Minimum Wage and State of the Union 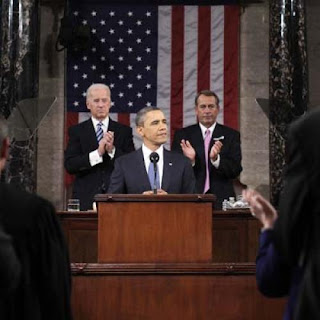 I heard a lot in the State of the Union Address that I have waited four years to hear. The primary flaws in the system are not been addressed now but they are not timely either. What is been addressed is actions set to reshape and encourage economic growth.

Expect a carbon tax system that speeds the conversion to natural gas and the expansion of the internal US oil industry. We now know that this has worked very well in Australia were wind is now the cheapest solution. Combined with a national initiative to rebuild infrastructure, build high speed transport and a national superconducting power grid and the smart grid that goes with it and we have a lot of important national investment.

Now comes the challenge of delivery.

Beyond that the minimum wage hike was long overdue and linking it directly to the inflation rate, not yet contemplated, is next up and will establish the linkage to the idea of a living wage. It really needs to be this way and the core idea also needs to be improved and made age sensitive to promote additional social agendas.

Again the USA is also embarked in promoting a superior educational infrastructure and at least they are empowering the communities. It is wonderful how a sharp lack of resources will focus the mind and cause centrists to distribute power and responsibility. And yes children, the party is over for the universities.

The USA needs to engage in a massive infrastructure replenishment to powerfully stimulate the economy and generate the high growth now needed for the next seven years.


The Case For higher minimum wage

In President Obama’s State of the Union on Tuesday, perhaps the most surprising inclusion was his call to raise the minimum wage to $9 an hour by 2015 and index it to inflation. It wasn’t an entirely new proposal from the president — in 2008, he called for raising it to $9.50 by 2011 — but this was the first time in years that Obama has pushed for a minimum wage increase. Here are five reasons why he’s right to push this issue once again.


• It will help the economy. Any time that Democrats suggest raising the minimum wage, Republicans and Big Business howl that it will hurt job creation. To be fair, this seems intuitive, and indeed was conventional wisdom in economic circles for many years, but empirical studies have found over and over again that this is not the case. Economist Jared Bernstein writes that this is “potentially because they increase employers’ ability to attract, retain, and motivate workers. And they benefit workers by increasing the reward to work.” In fact,recent studies suggest that raising the minimum wage right now may have a small positive effect on the economy, with low-income workers spending at least some of their new wages immediately, boosting GDP growth and lowering unemployment slightly.

• It reduces poverty and inequality.  Recent studies continue to suggest that the decline in the minimum wage over the last thirty years has contributed noticeably to the rise in economic inequality, a rise that continues apace in post-recession America. A higher minimum wage would help finally reverse this ever-more-dangerous trend.  And while Obama’s proposed increase still leaves many Americans (especially those with families) in poverty, it would still push millions above the poverty line. Overall, it would help 21 million workers, according to the Economic Policy Institute’s Lawrence Mishel, and increase wages by $22 billion. Increasing the minimum wage, of course, is but one tool in fighting inequality and poverty, but it remains an effective one.
• It reduces in the “wage gap” for women and minorities. Despite making up slightly less than half the workforce,women hold more than 60% of all minimum wage jobs. Not surprisingly, then, women would disproportionately benefit from the increase,helping to shrink the “wage gap” at a time when HouseRepublicans refuse to pass other measures, such as the Paycheck Fairness Act, that would close this gap. Similarly, Hispanics and African-Americans would also disproportionately benefit.

We stand for a living wage…enough to secure the elements of a normal standard of living — a standard high enough to make morality possible, to provide for education and recreation, to care for immature members of the family, to maintain the family during periods of sickness, and to permit of reasonable saving for old age.

Roosevelt understood that a living wage (which, it must be noted, would be higher in today’s America than what the president is calling for) carries out the commitment the Founders made in the Constitution to “promote the general welfare.” It is a commitment that goes all the way back to the country’s beginnings, to the Puritans and John Winthrop,who in his famous “City on a Hill” sermon (yes, the same one Ronald Reagan was so fond of), said “we must be knit together, in this work, as one man…We must delight in each other; make other’s conditions our own; rejoice together, mourn together, labour and suffer together, always having before our eyes our commission and community in the work, as members of the same body.” Obama’s push for a $9 minimum wage, while it doesn’t go far enough, is still an important step toward restoring that truly American community and its general welfare.

Murray Rothbard demolished the argument in favour of legally compulsory minimum wage laws 30 years ago with the following:

In truth, there is only one way to regard a minimum wage law: it is compulsory unemployment, period. The law says: it is illegal, and therefore criminal, for anyone to hire anyone else below the level of X dollars an hour. This means, plainly and simply, that a large number of free and voluntary wage contracts are now outlawed and hence that there will be a large amount of unemployment. Remember that the minimum wage law provides no jobs; it only outlaws them; and outlawed jobs are the inevitable result.

If the minimum wage is, in short, raised from $3.35 to $4.55 an hour, the consequence is to disemploy, permanently, those who would have been hired at rates in between these two rates, i.e., the lowest wage workers, the very workers whom the advocates of the minimum wage are claiming to foster and protect.

The advocates of the minimum wage and its periodic boosting reply that all this is scare talk and that minimum wage rates do not and never have caused any unemployment. The proper riposte is to raise them one better; all right, if the minimum wage is such a wonderful anti-poverty measure, and can have no unemployment-raising effects, why are you such pikers? Why you are helping the working poor by such piddling amounts? Why stop at $4.55 an hour? Why not $10 an hour? $100? $1,000?

It is obvious that the minimum wage advocates do not pursue their own logic, because if they push it to such heights, virtually the entire labor force will be disemployed. In short, you can have as much unemployment as you want, simply by pushing the legally minimum wage high enough.

The fact is that they have always been shrewd enough to stop their minimum wage demands at the point where only marginal workers are affected, and where there is no danger of disemploying, for example, white adult male workers with union seniority. When we see that the most ardent advocates of the minimum wage law have been the AFL-CIO, and that the concrete effect of the minimum wage laws has been to cripple the low-wage competition of the marginal workers as against higher-wage workers with union seniority, the true motivation of the agitation for the minimum wage becomes apparent.

This is only one of a large number of cases where a seemingly purblind persistence in economic fallacy only serves as a mask for special privilege at the expense of those who are supposedly to be "helped."

Once in a while, AFL-CIO economists and other knowledgeable liberals will drop their mask of economic fallacy and candidly admit that their actions will cause unemployment; they then proceed to justify themselves by claiming that it is more "dignified" for a worker to be on welfare than to work at a low wage. This of course, is the doctrine of many people on welfare themselves. It is truly a strange concept of "dignity" that has been fostered by the interlocking minimum wage-welfare system.

Unfortunately, this system does not give those numerous workers who still prefer to be producers rather than parasites the privilege of making their own free choice.

Of course, the pure propaganda of Terra Forma's pro minimum wage article was revealed with the howler that it is consistent with American values by citing Theodore Roosevelt. How about looking at the Declaration of Independence for a better source of "American values", particularly each person's right to "liberty", something that is denied in the sphere of employment when minimum wage laws are in effect.

The real problem with a minimum wage structure is not the wage itself but the outright failure to maintain a market for all the available labor.

imagine a market for the shares of Exxon for example in which a portion of the shareholders are not allowed to participate and must sit on the sidelines while the rest do. It really is that simple.

Full employment has only been achieved during wartime for exactly that reason. Putting a base job of say tree planting with a constructive value to the economy into place allows the economy itself to shift upward and sharply increases the tax take that offsets the outlay. It really can be made to balance.