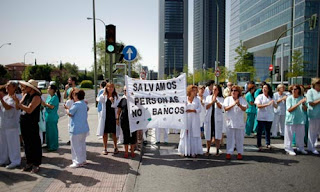 Once again the rational behind this escapes me except to assign it all to stupid people who have misplaced authority over others. The health care service can become more efficient and it can become better. What it cannot do is become cheaper except by kicking costs back to consumers and that merely negates the whole premise. It it wants to be come a profit making business, then it must cherry pick and overcharge those who can pay. The ethics of this formula are not worth discussing.

If the only service provided by the insurance industry is cash management, then why are they there? Any coop can do better without executive expectations as to salaries. Perhaps the churches should do it. They at least are part of the community.

The whole purpose of universal medical insurance is to share mandatory costs as they come up. The bigger the pool the better the capacity to go a little further in solving rare problems. That is all that size provides.

According to the Organization for Economic Cooperation and Development's latest health care rankings of the 34 most developed nations in the world, the United States ranks dead last in male life expectancy.

But, here's some good news (at least for those fans of Americanized health care): our world rankings might soon improve.
Not because we're radically changing our privatized system that puts profits ahead of people's lives. But because banksters in Europe are forcing several nations that rank ahead of us to ditch their national public health care systems, and replace them with more privatized (and profitable) American-style health care systems.

And, despite what conservatives say about how the American health care system is the envy of the rest of the world, those Europeans who are watching banksters re-make their public health care systems are outraged.

On Sunday, protests swept across Spain, with thousands of doctors, nurses, and health professionals demonstrating against new conservative austerity measures that will privatize more than 40 public hospitals and care centers.

Spain, like Greece, is indebted to the very foreign banksters who crashed their economy. And rather than telling those foreign banksters to take a hike like Iceland did, Spain's austerity-happy government is paying off the banksters by taking money from working people through cutting socials services like health care.

Spain's Prime Minister Mariano Rajoy argues the health care reforms will save his nation more than $9 billion this year, which can then be given to the banksters.

But, as one protesting nurse, Emilia Becares, told France 24 News, "There is no study that shows that privatising the management of hospitals leads to lower costs. This privatisation hurts patients' health care to benefit other interests."

Those "other interests" are, of course, the banksters and the for-profit healthcare hustlers.

The United States proves Emilia right. Privatization here has produced the highest health care costs of anywhere else in the developed world; the United States spends far more money on health care than any other OECD nation. And, although the banksters and the health care hustlers are making a fortune, average working people are dying at rates that shock the rest of the world: we rank near the bottom in health care outcomes.[ just when are people going to come to their senses? arclein]

So while conservative technocrats in charge of Spain are willing to use health care privatization to solve their short-term deficit woes, doing so will only make them worse over the long term.

Soon, Spanish hospitals, run for a profit, will decide if prescribing certain treatments and medical tests will boost or cut their quarterly profit goals. Spanish citizens, who used to have a right to health care, will now have to haggle with privatized corporate death panels that are more focused crunching numbers than saving lives.

As prices go up, preventative care will decline. There will be fewer visits to doctors. And the overall health of the population will plummet with the moneychangers in charge.

This means that over the long term the cost of healthcare to Spain will go up.

This is what Greece is now dealing with, since their public health care system was ripped apart by the banksters in 2011. Prior to the crisis, Greeks enjoyed complete universal health care. But when the banksters shook down the entire nation, they targeted the health care system, and told unemployed Greeks that they now have to pay for healthcare out of pocket. And if they don't have the money, then...well...too bad.

Greek doctor, Kostas Syrigos, told the New York Times about a woman with a tumor the size of an orange that had broken through her skin because she couldn't afford to see a doctor after the austerity cuts to health care.

Dr. Syrigos said, "Things like that are described in textbooks, but you never see them because until now; anybody who got sick in this country could always get help...In Greece right now, to be unemployed means death."

Sick and unemployed Americans face the same fate. According to a 2009 Harvard study, 45,000 Americans die every year because they don't have health insurance. And half of all bankruptcies in America are due to medical bills.

Most of the public health care systems across Europe were created after World War II, as the people understood that they needed to rebuild together, and should at the very least be providing free health care to each other, too.

But, the United States, triumphant after World War II, never learned this lesson. Instead, we handed the care of our citizens off to corporations and billionaires, and are today paying dearly for it with budget-busting health care costs, sick populations, and far too many premature deaths. But our healthcare banksters, like the CEOs of United Healthcare, are literally billionaires.

And those models for health care reform across the Atlantic are now disappearing one-by-one – the latest victims of conservatives and their bankster austerity programs. But at least in places like Greece and Spain, the people are putting up a fight against these profiteers. And it's a fight that's long overdue in America.

We should all ask ourselves why is it that thousands are taking to the streets to defend their public health care systems in Europe, but not once has there been a legitimate rally in America to defend our privatized health care system that kills tens of thousands of American every single year. Deep down inside, we know we're getting ripped off. Just like the Greeks and the Spaniards know they're getting ripped off.

Let's hope that the decision banksters made to target universal health care rights in Europe will inspire a new struggle in the United States that affirms we are indeed our brothers' and our sisters' keepers.

Thom Hartmann has no idea what Capitalism is...the definition is: Private ownership of goods and the means of production in a FREE MARKET. The healthcare industry is run by MONOPOLIES- it is not a free market.

Google The Surgical Center of Oklahoma to see how reasonable surgery can be when it is run independent of government welfare and insurance:

Privatised healthcare is an excellent idea, providing the Govt gets out of the way with its endless rules, laws and bureaucracies! The big thing here is incentive, and public bodies have no incentive at all to be efficient, so public costs just go up and up while performance goes down and down.
Capitalist competition leads to inovation and efficiency, and surely MacDonalds has shown that there is always someone willing to have a product ready for the poor. Curches adn charities can provide assistance for those in need as they have always done, although the writing is on the wall that Govts will soon means-test healthcare so they only pay for the poor anyway. The rest of us will be forced to pay for second-rate public healthcare.
Also, using death rates from the USA is very suspect, you tend to die of gun-related incidents there that do not happen in other countries.