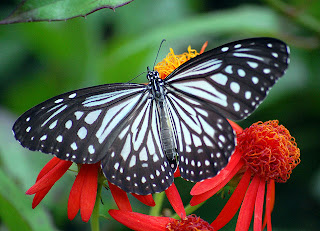 Of course it is a major crisis, but this is shutting the barn door rather late in the day.  Just about every creature that was slightly vulnerable has already been eliminated.  It also was not the work of man but of man’s junior partners such as the rat and a host of other opportunists who effectively demolished the ecology of every independent island.  Man did little more than arrive on the beach and we did most of that in the past two centuries.

By and large the survivors will now survive and as our agricultural practices reframe themselves once again, it will be much more benign to the general ecosystem.

The fact remains, that in the next forty years several things are going to happen.

The whole of humanity will become fully modernized and this means the individual feet print in terms of acreage will shrink.

The fossil fuel component of our economy will be retired.

The use of artificial fertilization will end as biochar nutrient capture and organic methods take over globally.

and crop integration will become the dominate protocol wherever possible.

Proper forest grooming will take over on non crop lands.

I still expect to see the Mastodon, the Mammoth and the Dodo inside of a decade.

Biodiversity is declining rapidly throughout the world. The challenges of conserving the world's species are perhaps even larger than mitigating the negative effects of global climate change. Dealing with the biodiversity crisis requires political will and needs to be based on a solid scientific knowledge if we are to ensure a safe future for the planet.

This is the main conclusion from scientists from University of Copenhagen, after 100 researchers and policy experts from EU countries were gathered this week at the University of Copenhagen to discuss how to organise the future UN Intergovernmental Panel for Biodiversity and Ecosystem Services, IPBES -- an equivalent to the UN panel on climate change (IPCC).

Species extinction and the degradation of ecosystems are proceeding rapidly and the pace is accelerating. The world is losing species at a rate that is 100 to 1000 times faster than the natural extinction rate.

Mass extinctions of species have occurred five times previously in the history of the world -- last time was 65 million years ago when the dinosaurs and many other species disappeared. Previous periods of mass extinction and ecosystem change were driven by global changes in climate and in atmospheric chemistry, impacts by asteroids and volcanism. Now we are in the 6th mass extinction event, which is a result of a competition for resources between one species on the planet -- humans -- and all others. The process towards extinction is mainly caused by habitat degradation, whose effect on biodiversity is worsened by the ongoing human-induced climate change.

"The biodiversity crisis -- i.e. the rapid loss of species and the rapid degradation of ecosystems -- is probably a greater threat than global climate change to the stability and prosperous future of humankind on Earth. There is a need for scientists, politicians and government authorities to closely collaborate if we are to solve this crisis. This makes the need to establish IPBES very urgent, which may happen at a UN meeting in in April," says professor Carsten Rahbek, Director for the Center for Macroecology, Evolution and Climate, .

A biodiversity equivalent to the UN panel on climate change

Professor Rahbek was one of the main forces behind this week's conference on biodiversity and the organisation of the new Biodiversity panel IPBES (Intergovernmental Platform for Biodiversity and Ecosystem Services). The conference was arranged and hosted in cooperation with the Danish Ministry of Environment and took place at the , where more than 100 scientists and decision makers, primarily from EU countries were gathered. The conference has been organised just as is taking over the EU Presidency, which provides an opportunity to influence the process of organising the UN Biodiversity Panel.

The new panel is the biodiversity equivalent to the UN panel on climate change, which has resulted in enhanced policy awareness and changes around the world, and initiated a change of behaviour for billions of people in many companies. Unfortunately, the same is not true when it comes to reducing the threats to ecosystems and the loss of animal and plant species.

"There is a need to produce future scenarios that are easily understood and at the same time bring together the best scientists in this field. It is technically possible to develop such scenarios, if they are requested by decision-makers and politicians involved in the IPBES process. The myth that university scientists cannot or will not contribute to concrete solutions of large-scale society problems in close collaboration with practitioners, decision makers and politicians has been shown to be untrue through our close engagement in the organisation and participation in these workshops. The collaboration between the Danish Ministry of Environment, the EU presidency and University of Copenhagen over organising this conference is a successful example of how universities can contribute in dealing with some of the largest challenges that face the world at large," states Carsten Rahbek.

The Center for Macroecology, Evolution and Climate at University of Copenhagen led by Carsten Rahbek and producing world class research within biodiversity is arranging this conference in cooperation with the ministry of environment and EPBRS, European Platform for Biodiversity Research Strategy supported by EEA.
Posted by arclein at 12:01 AM