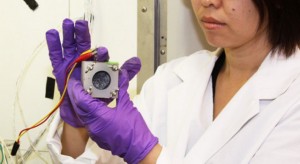 It appears that this technology is about to be mastered. It is a clear winner over present technology and produces some power as a bonus. If the present protocol consumes 3% of power out put and this approach produces 1% of power output, it converts into a 4% swing to the good in power availability.

All plant must be replaced sometime so this development is obvious welcome.

It is not the power that matters here, it is the superior methodology that eliminates nasty gases and produces a salable byproduct. The present solution is actually good enough, but this is superior and thus welcome while at the same price point.

Engineers at Oregon State University have made a breakthrough in the performance of microbial fuel cells that can produce electricity directly from wastewater, opening the door to a future in which waste treatment plants not only will power themselves, but will sell excess electricity.

The new technology developed at OSU uses new concepts — reduced anode-cathode spacing, evolved microbes and new separator materials — and can produce more than two kilowatts per cubic meter of liquid reactor volume — 10 to 50 more times the electrical per unit volume than most other approaches using microbial fuel cells, and 100 times more electricity than some.

This technology cleans sewage by a very different approach than the aerobic bacteria used in the past. Bacteria oxidize the organic matter and, in the process, produce electrons that run from the anode to the cathode within the fuel cell, creating an electrical current.

Almost any type of organic waste material can be used to produce electricity — not only wastewater, but also grass straw, animal waste, and byproducts from such operations as the wine, beer or dairy industries.

The researchers say this could eventually change the way that wastewater is treated all over the world, replacing the widely used “activated sludge” process that has been in use for almost a century. The new approach would produce significant amounts of electricity while effectively cleaning the wastewater, they suggest.

“If this technology works on a commercial scale, the way we believe it will, the treatment of wastewater could be a huge energy producer, not a huge energy cost,” said Hong Liu, an associate professor in the OSU Department of Biological and Ecological Engineering. “This could have an impact around the world, save a great deal of money, provide better water treatment and promote energy sustainability.”

Experts estimate that about 3 percent of the electrical energy consumed in the United States and other developed countries is used to treat wastewater, and a majority of that electricity is produced by fossil fuels.

The system also works better than an alternative approach to creating electricity from wastewater that is based on anaerobic digestion that produces methane. It treats the wastewater more effectively, and doesn’t have any of the environmental drawbacks of that technology, such as production of unwanted hydrogen sulfide or possible release of methane, a potent greenhouse gas, the researchers believe.


The OSU system has now been proven at a substantial scale in the laboratory, Liu said, and the next step would be a pilot study. A good candidate, she said, might initially be a food processing plant, which is a contained system that produces a steady supply of certain types of wastewater that would provide significant amounts of electricity.

Once advances are made to reduce high initial costs, researchers estimate that the capital construction costs of this new technology should be comparable to that of the activated sludge systems now in widespread use today — and even less expensive when future sales of excess electricity are factored in.

The approach may also have special value in developing nations, where access to electricity is limited and sewage treatment at remote sites is difficult or impossible as a result.

The ability of microbes to produce electricity has been known for decades, but only recently have technological advances made their production of electricity high enough to be of commercial use. OSU researchers reported several years ago on the promise of this technology, but at that time the systems in use produced far less electrical power.  Continued research should also find even more optimal use of necessary microbes, reduced material costs and improved function of the technology at commercial scales, OSU scientists said.

REFERENCES:
About the Author

Aaron Jackson is a writer for the excellent site, Exposing The Truth. Please visit them on Facebook, here.

This article is offered under Creative Commons license. It’s okay to republish it anywhere as long as attribution bio is included and all links remain intact.