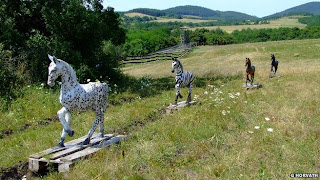 Somehow, the zebra learned to work with stripes and the certain driver was this far lower attractiveness to horse flies in particular.  It was obviously a difficult trick or every other critter would be doing it.

It is all rather surprising really.  The stripes are even optimized for best performance.  It is hard to believe that the horse flies alone drove these changes but it seems to be true.  That others rarely did this simply tells us it is difficult.  The advantage is way too attractive.

It is noteworthy that certain Pleistocene horses sported stripes as per cave drawings and confirmed partly with genetic work since.

Most certainly, this was not about avoiding lions and humans.

Why zebras evolved their characteristic black-and-white stripes has been the subject of decades of debate among scientists.

Now researchers from and claim to have solved the mystery.
The stripes, they say, came about to keep away blood-sucking flies.

They report in the Journal of Experimental Biology that this pattern of narrow stripes makes zebras "unattractive" to the flies.

They key to this effect is in how the striped patterns reflect light.

There are many theories about why zebras are striped

Others have shown that stripes may help the animals regulate their temperature, and that zebras recognise other individuals by their stripes

Studies of zebra embryos show that, early in development, they are black and they develop their white stripes later

"We started off studying horses with black, brown or white coats," explained Susanne Akesson from , a member of the international research team that carried out the study.

"We found that in the black and brown horses, we get horizontally polarised light." This effect made the dark-coloured horses very attractive to flies.

It means that the light that bounces off the horse's dark coat - and travels in waves to the eyes of a hungry fly - moves along a horizontal plane, like a snake slithering along with its body flat to the floor.

Dr Akesson and her colleagues found that horseflies, or tabanids, were very attracted by these "flat" waves of light.

Having discovered the flies' preference for dark coats, the team then became interested in zebras. They wanted to know what kind of light would bounce off the striped body of a zebra, and how this would affect the biting flies that are a horse's most irritating enemy.

"We created an experimental set-up where we painted the different patterns onto boards," Dr Akesson told BBC Nature.

She and her colleagues placed a blackboard, a whiteboard, and several boards with stripes of varying widths into one of the fields of a horse farm in rural .
"We put insect glue on the boards and counted the number of flies that each one attracted," she explained.

The striped board that was the closest match to the actual pattern of a zebra's coat attracted by far the fewest flies, "even less than the white boards that were reflecting unpolarised light," Dr Akesson said.

"That was a surprise because, in a striped pattern, you still have these dark areas that are reflecting horizontally polarised light.

"But the narrower (and more zebra-like) the stripes, the less attractive they were to the flies."

To test horseflies' reaction to a more realistic 3-D target, the team put four life-size "sticky horse models " into the field - one brown, one black, one white and one black-and-white striped, like a zebra.

The researchers collected the trapped flies every two days, and found that the zebra-striped horse model attracted the fewest.

Prof Matthew Cobb, an evolutionary biologist from the pointed out that the experiment was "rigorous and fascinating" but did not exclude the other hypotheses about the origin of zebras' stripes.

"Above all, for this explanation to be true, the authors would have to show that tabanid fly bites are a major selection pressure on zebras, but not on horses and donkeys found elsewhere in the world... none of which are stripy," he told BBC Nature.

"[They] recognise this in their study, and my hunch is that there is not a single explanation and that many factors are involved in the zebra's stripes.