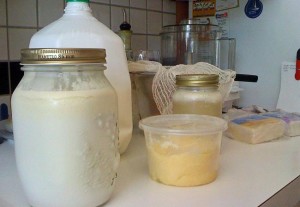 It is becoming rather plausible that the dairy industry knows that their product has long established deleterious effect on human health and that real competition from a successful raw milk protocol is far more dangerous to them that anyone ever wants to admit.

I think the industry needs to take a page from the natural food industry and establish a direct farm to consumer distribution system that is licensed as such.  When you know exactly what farm your milk comes from, problems are solved by a phone call and cross contamination is impossible.  More important that any of all that is that every farmer immediately has a real reputation to protect.  He can be made to take the appropriate courses in food handling that this industry calls for.

An effectively regulated and licensed raw milk industry would be a boon to the farm gate because in this day and age, the operator is producing plenty of products to start with and is quite able to handle the extra step of packaging and delivery on the timely basis that it calls for.

An operation with a hundred cows just happens to have stainless steel everywhere and the expertise to do the tasks required.  No one is running a subsistence fifteen cow operation.

Reuters, Fox and other media outlets reported September 13 about a large European raw milk study published at the Journal of Allergy and Clinical Immunology, online August 29, 2011, showing kids who drink raw milk are 41% less likely to suffer from asthma and allergies. The study included 8334 school-aged children, and 7606 of them provided serum samples to assess specific immunoglobulin E (IgE) levels. Over 800 cow’s milk samples were collected at the participants’ homes. Reuter’s article stated:

Compared with kids who only drank store-bought milk, those who drank raw milk had a 41-percent reduction in their odds of developing asthma. They were also only about half as likely to develop hay fever — even after accounting for other factors that might be relevant. On the other hand, those who drank boiled farm milk had no less asthma than those who drank store milk. The protective effect was linked to so-called whey proteins in the milk, such as BSA and alpha-lactalbumin. Pasteurization remains an effective tool to inactivate harmful microorganisms but may simultaneously destroy whey proteins.

The results of this study brings up two other very serious questions rarely posed: 1) What other diseases and disorders are caused by regular pasteurized, homogenized milk with synthetic chemical additives? and 2) What other health benefits can be realized from including raw milk as part of a well-rounded diet of whole, fresh foods?

1)      What other diseases and disorders are caused by regular pasteurized, homogenized milk with synthetic chemical additives?

First, twenty percent of Americans get sick immediately upon drinking regular milk and this has been growing every year. An informal survey by The Weston A. Price Foundation found that ninety percent of those lacto-intolerant can drink raw milk. What is it doing to the health of the other 80 percent? This study names just asthma and allergies. But there are a host of other auto-immune disorders caused or made worse by drinking regular milk. These symptoms are either corrected or lessened when regular milk is stopped or when substituting regular milk with raw milk. . It is only logical to assume many people do not know the symptoms they suffer are regular-milk-induced. Face it, regular milk today is not what grandma drank. Our article Skim Milk may be making you fat and sick is already the No. 1 post of the year. It tells how skim milk can help make you fat and raise bad cholesterol

In a December 2009 survey by the Journal, 877 raw milk drinkers had this to say:

What all responders said about pasteurized milk:

2)      What other health benefits can be realized from including raw milk as part of a well-rounded diet of whole, fresh foods?

From my experience, I will state that children and adults who drink raw milk are significantly healthier and have fewer diseases and disorders than those who drink regular pasteurized, homogenized milk. One reason may be those essential natural animal fats and healthy cholesterols. A whole set of studies substantiate the health benefits and safety of properly produced raw milk.

Humorously, the subject study goes as far as not to recommend raw milk because of its “dangers”. Be assured the FDA and USDA will continue to bust Amish farmers and other dairies producing raw milk intended and fit for human consumption, even though no deaths have been recorded from raw milk consumption in the last ten years. In fact, of 42 raw milk illnesses per year on average reported, using government figures, you are about 35,000 times more likely to become ill from other foods than you are from raw milk, especially if you are careful to select a clean, safe raw dairy. Yet the U.S. Department of Health and Human Services have targeted a ban on access to raw milk, included in the top 10 health crises to be addressed in their Healthy People 2020 campaign

Do not expect the milk industry or their marketing partners at USDA, FDA or CDC to fund a study in overall health outcomes of raw versus regular milk drinkers. The milk industry is already losing market share as the underground secret message of natural milk is overcoming television milk mustaches on celebrities. But if a study were ever conducted, the healthier outcomes would not be from raw milk or healthier diets alone. Of the hundreds of raw milk drinkers I know also have children who are not overly vaccinated nor do they drink fluoridated water.