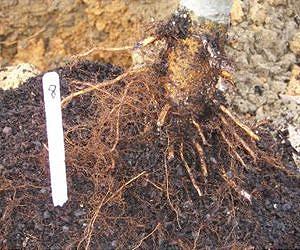 This is very important. I see an immediate application in mapping root behavior in proximity to biochar distributed in the soil.  Everything suggests that biochar acts like a magnet for root growth but that has to be demonstrated in a format such as this.

Other protocols can also be explored such as the variety of soil blends used in seed beds.  All this can be properly optimized while up to now it has been art only.  It is a major development in soil research.

Now if we could only figure out how to map axions in the brain as easily.

Revealed in accurate detail, the underground world of plants

The RooTrak software works by taking a stack of virtual slices through the root-bearing soil. It treats each slice as a frame in a movie, so that static roots in each slice are treated as moving objects which can be tracked. This allows the software to differentiate between root and water or organic elements in the soil much more effectively than previous techniques. The detailed accurate root architecture can then be seen in three dimensions

Plant and computer scientists can now study the underground world of plants with more accuracy and clarity. The revolutionary technique will improve our chances of breeding better crop varieties and increasing yields.

Developed at The University of Nottingham by a team of experts from the Schools of Biosciences and Computer Science, the new approach is based on the same X-ray technology used in hospital CT scans and incorporates new image analysis software which, for the first time, can automatically distinguish plant roots from the other materials found in soil.

The interdisciplinary team of scientists from the Centre for Plant Integrative Biology (CPIB) used X-ray Micro Computed Tomography (Micro-CT) to look at the shape and branching pattern - the architecture - of roots in soil. The data was then fed into the new RooTrak software which overcomes the problem of distinguishing between roots and other elements of the soil.

Dr Sacha Mooney, an expert in soil physics in the School of Biosciences, said: "This technique is a hugely important advance. The application of for visualising roots has been limited because we simply couldn't see a large portion of the root structure. RooTrak has enabled us to overcome this and has opened up the use of the technology for exploring the key questions regarding how we can manipulate plants and soils for improving our food security."

The RooTrak software works by taking a stack of virtual slices through the root-bearing soil. It treats each slice as a frame in a movie, so that static roots in each slice are treated as moving objects which can be tracked. This allows the software to differentiate between root and water or organic elements in the soil much more effectively than previous techniques. The detailed accurate root architecture can then be seen in three dimensions.

Tony Pridmore, Data Director at CPIB and an expert in tracking and analysis software, said: "Thinking of Micro-CT data as a sequence of images allows us to solve the problems caused by variations in the appearance of plant roots and the similarity of some roots to the surrounding soil. This is important because we can now extract descriptions of root architecture quickly and objectively."

Malcolm Bennett, Professor of Plant Sciences and an expert in root biology, said: "Root architecture critically influences nutrient and water uptake. A key impediment to genetic analysis of root architecture in crops grown in soil has been the ability to image live roots. Recent advances in microscale X-ray Computed Tomography (MicroCT) and RooTrak software at now make this possible."

This ambitious project will be undertaken by a multidisciplinary team of scientists in the Centre for Plant Integrative Biology (CPIB) led by Professor Bennett. To undertake this research project help from collaborators across Europe, and is also required to ensure that the most advanced techniques and biological resources are exploited to radically impact efforts to improve crop performance.

Global Food Security is also a key project within the University's new appeal, Impact: The Campaign, which is delivering the University's vision to change lives, tackle global issues and shape the future.

The results of this research, which has already been demonstrated on the roots of maize, wheat and tomato, have been published in the international scientific journal Plant Physiology.
Posted by arclein at 12:01 AM