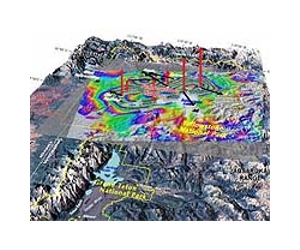 As we come to appreciate the astounding civilization of the Minoans that ended with Thera, we have also come to understand that the successor empire was Atlantis based on the delta south of by Gibraltar and that this too was reduced three centuries later by .

It appears Plato’s tale subsumed the events and descriptions of Thera, and the later inundation of Atlantis into one jumbled story.

In the meantime, we learn that a caldera volcano should give decent notice which makes a great deal of sense.  Magma does not flow smoothly or fast and if it is filling a huge magma camber then a succession of events appears probable.   It also begs the question of how can the energy for the blast be accumulated.  It thus makes sense for it to enter a final phase of heavy flows.

Thera is still a small Super volcano and I still do not wish to be anywhere near one.

Around 1630 BC, a super-volcano blew apart the Aegean , an event so violent that some theorists say it nurtured the legend of Atlantis.

More than three and a half millennia later, the big blast is yielding forensic clues which help the search to predict future cataclysmic eruptions, scientists said on Wednesday.

Bigger than the destruction of 's Krakatoa in 1883, the Santorini event was a so-called caldera eruption, a kind that happens mercifully only at intervals of tens of thousands of years, sometimes far more.

The chamber of a volcano becomes progressively filled with magma but lacks vents from which to discharge this dangerous buildup of gas and molten rock.

The pressure cooker culminates in catastrophe, ripping off the top of the volcano and leaving a depression called a caldera, the Spanish word for cauldron.

One of the great unknowns is when a caldera-type episode is in the offing.

That question is a particular concern for in , a truly massive volcano classified as "high-threat" by the Geological Survey (USGS).

Vulcanologists led by French-based Timothy Druitt scrutinised crystals of a mineral called feldspar that had been ejected from the Santorini eruption.

They looked for traces of magnesium, strontium and titanium, deposited in waves over thousands of years by the slowly advancing magma. The chemicals, they found, were a telltale of events over time.

From these signatures, the picture that emerges is of final, fatal spurts of magma injection which happened in the last decades -- maybe even just the final months -- before the great eruption.

The study, reported in the journal Nature, chimes with other research that suggests magma reservoirs in caldera volcanoes undergo a "pulsatory" buildup which probably accelerate before eruption.

If so, the findings are useful for vulcanologists poring over and other hotspots. They could detect such pulses using satellite technology, which records ground deformation over time as the volcano bulges, and ground-motion sensors.

But only close familiarity helps build a "pulse" model which gives a good idea of when a volcano is about to blow its lid.

"Long-term monitoring of large, dormant caldera systems, even in remote parts of the world, is essential if late-stage growth spurts of shallow magma reservoirs are to be detected well in advance of caldera-forming eruptions," says the paper.

Also called the Minoan Eruption, the Santorini event spewed out up to 60 cubic kilometres (14.4 cubic miles) of material, causing ash clouds that devastated Bronze Age civilisations in the .

Some theorists say the event inspired Plato's tale, written some 1,300 years later, of a circular island-empire inhabited by people of great culture and wealth, that sank to the depths of the sea in a single day and night of earthquakes and floods.

The volcanic activity at the end of the Pleistocene inthe area of the North Atlantic was much higher than this bronze age scenario would ever allow and the entire floor of the North Atlantic is carpeted with debris from a recent blowout. Evidence of this has been known for more than a century now. Concurrent with this event, we also know the level of the magma chamber at the mid-atlantic ridge fell somewhwere in excess of 6000 to 9000 meters: there is really no reason to look elsewhere for the sinking of Atlantis.

Besides the chronology of the volcanic eruption of Thera is not in synch with the fall of Minoan Crete, and that is the single most important consideration why most experts now REJECT the Minoan-Atlantis theory. The Minoan-Atlantis theory had its heyday fifty years ago and theorists have NOT been adjusting their theoretical framework to accomodate new data-such as the newer radiocarbon dates-ever since.

And there is no reason why Atlanteans could not have been at a chalcolithic level of culture: copper artefacts have been recovered from the Near East at a date of the very oldest Holocene and at least one piece of worked copper dredged from the seabed south of the Azores.