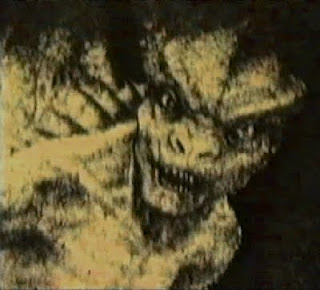 There are a number of reports out there that tell of a reptilian derived species that is humanoid and appears to live within the earth.  I have also posted a report of an interview with one such creature in which it is revealed that they are terran, and arose from our own reptilian past over millions of years. They possess advanced technology and all that and do choose to live deep within the Earth.

That interview is fairly complete and also self consistent and conforms with many of my own unrelated speculations external to the issue of another route to intelligence on Earth.

It is noteworthy that at the time of the extinction, specific reptiles were prospective for the emergence of an intelligent creature.

The following report conforms well to earlier reports and descriptions.

I do think that these creatures would occasionally access the surface in order to conduct science.  Thus once acceptance of the phenomena is reached, there is little here exceptional except that actual encounters show surprising familiarity on the part of the reptiles.  They are not particularly afraid of us and are quite willing to communicate and will communicate.  This familiarity is not observed in other UFO reported creatures.

So make of this what you will.

The original email from the witness was forwarded to me during the Christmas holidays. With honest intent and in deference to Gregor (the witness) I have debated whether to present this anecdote to the readers for a variety of reasons. I have exchanged emails with the witness but there were some communication difficulties that needed to be ironed out since his English was a bit rusty according to him. Anyway, here is the final version of Gregor's encounter:

Hello Lon - I am writing to you from where I live in . Recently I came across your story about the man who had an encounter with an alien type creature in a cave in the . The story is similar to my encounter in an obscure cave here in . This area is known for salt mining and Salzkammergut, the salt mines of the former Habsburg empire. I am a trained and certified geologist - I studied at the  of and in the at the  of , . I have explored and documented cave systems throughout , and since 1988.

In May 2011 I was in a narrow cave that a colleague had recently found. This was approximately 2 KM north of Obertraun on the opposite side of the descending mountain range in the foothills near the east bank of Halsatter See (lake). As I moved through the difficult passageway I started to hear voices emanating from the darkness ahead of me. I stopped to collect a few sample from the cave wall - chipping it with my pick. I moved deeper - maybe 50 meters - until I noticed the voices again. I am familiar with echos and Doppler effect sounds in caves but this was totally different. I stood quietly for several minutes until the voices stopped.

Again I moved through the cave - almost crawling at this point. After another 40 meters I ascended into a chamber that was big enough to accommodate several people. There were two wide openings on the opposite side of the chamber - each looked like it has been excavated by machine. There was also an obvious rotting odor. As I examined the chamber I noticed an odd red iridescence as I passed the light over the rock floor. When I knelt down to collect a sample I again heard voices coming from one of the passageways. At this point I was terrified and started to hurry back through the narrow cave. After I squeezed back several meters I was able to turn my head just enough to look back into the dark chamber.

The creatures were humanoid in stature - but these were not human. Each varied in height but all looked the same - muscular lizards that walked upright like humans. There is not a better term I can use to identify these beings. These creatures wore dark colored full-body uniforms that extended and covered the feet. I couldn't tell the exact color of the skin but each had a pronounced muzzle. The long tails were very prominent and swiftly swayed back and forth as they moved forward. The arms and legs were massive - I could detect the musculature through the uniforms. There were voices also - as if they were talking to each other. The voices actually sounded human though I could not detect the language. There were possibly 20 or more of these creatures as they walked single file through the chamber and into the other opening.

When I conceived it was safe to move I quickly withdrew from the cave. I think I may have been in shock because I barely remember anything that happened from that point until I reached my office. I decided to keep a private journal regarding my encounter - but I have not discussed it with anyone else. My colleague who originally found the cave told me that he has explored the cave since my encounter but never mentions anything about the chamber, other passageways or bizarre beings.

At this point in time, I am starting to doubt that I witnessed these creatures. Is it possible that I hallucinated this encounter - or possibly experienced something from the past or the future? I am a trained professional who deals with reality - but my beliefs have been seriously shaken. I appreciate your introspect and thoughts - as well as observation by your readers. Thank you – Gregor


NOTE: The fact that Gregor wondered if his encounter was a scene from another time in the past or future, he may have answered his own question...Lon
Posted by arclein at 12:01 AM

They are called Nephilim mentioned in the Bible, there are very many of them...google the name!!

Good god! why is there only one comment for this post? I found my way here by typing reptoids into Google and clicking the best-looking image of the first several that appeared. Great image! A lot of personality in the face. It looked like a photograph! But after reading the account, why is it looking directly at us?

Have you checked with the University of Wisconsin to see whether tis witness actually attended the school? It looks like the only verifiable fact & since cases like this are so devoid of evidence, anything that can be confirmed should be. If you don't have time, I might be able to help.

go for it. the whole reptoid story line reads like a creative writing project and may even come from the same author.

Yet stray apparent independent reports have been surfacing in which individuals have encounters and survive while clearly at risk which is opposite to Bigfoot encounters.

notice that we are missing tracks in these reports.

Waaaaay before the Bible, Veda had already acknowledged the type of entities known as the Nagas. This isn't the only reason to doubt the authenticity (non-borrowing sources) of the Bible (let alone its correctness) since the story of Jesus jaw-droppingly resembles that of Horus, an ancient Egyptian deity. Find and read the following article " Jesus NEVER existed: Writer finds no mention of Christ in 126 historical texts and says he was a 'mythical character'"