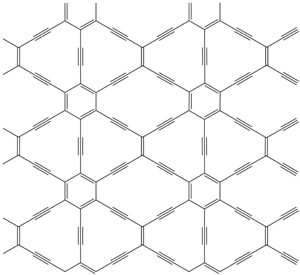 Or it may not be but it is certainly unusual and its fabrication clearly appears challenging, while that of graphene even occurs in nature as graphite.  It was challenging but we got to was in less than five years.

What is important is that we now know of it and even know of Dirac cones as it applies to graphene and plausibly elsewhere.

The apparent geometry promises a vastly strong material plausibly knitted together to form the strongest possible continuous fiber that can then be bundled into an amazing cable.  It even looks like something that could be engineered to be self healing.  We may get that space elevator yet, although it will be mute the moment we produce a magnetic field exclusion vessel able to lift tonnage into orbit.  Google my blog for MFEV or MEV.

Graphyne May Be Better than Graphene

Sheets of single-layer carbon with a variety of bonding patterns may have properties similar to the wonder material graphene, according to new computer simulations.

Super-strong, highly conducting graphene is the hottest ticket in physics, but new computer simulations suggest that materials called graphynes could be just as impressive. Graphynes are one-atom-thick sheets of carbon that resemble graphene, except in the type of atomic bonds. Only small pieces of graphyne have so far been fabricated, but the new simulations, described in Physical Review Letters, may inspire fresh efforts to construct larger samples. The authors show that three different graphynes have a graphenelike electronic structure, which results in effectively massless electrons. The unique symmetry in one of these graphynes may potentially lead to new uses in electronic devices, beyond those of graphene.

D. Malko et al., Phys. Rev. Lett. (2012). Stretched honeycomb. The carbon lattice in this 6,6,12-graphyne has a rectangular symmetry, unlike the hexagonal symmetry of graphene.

Graphynes differ from their carbon cousin graphene in that their 2D framework contains triple bonds in addition to double bonds. These triple bonds open up a potentially limitless array of different geometries beyond the perfect hexagonal lattice of graphene, although only small pieces of graphynes have been synthesized so far. Still, this hasn’t stopped theorists from exploring their properties [1]. Recent work gave an indication that certain graphynes might have Dirac cones [2]. To verify this, Andreas Görling of the of in and his colleagues have now performed a more rigorous investigation of graphyne using state-of-the-art methods.


The team selected three graphynes to study: two with hexagonal symmetry and a third with rectangular symmetry. The researchers first checked that these graphynes were stable by simulating their vibrations and checking that they returned to their original shape. They then determined the band structure using density-functional theory, the gold standard for dealing with the hopelessly large number of electron-electron interactions inside a material. The simulations showed that all three graphynes had Dirac cones. This was surprising in the case of the rectangular graphyne, Görling says, because most people assumed this sort of electronic structure was tied to hexagonal symmetry. The implication is that many other materials (some containing atoms other than carbon) could have Dirac cones.


On closer examination of the rectangularly symmetric graphyne, the team discovered that the Dirac cones were not perfectly conical. A vertical slice in the direction of the “short side” of the rectangular lattice gave an inverted triangle as would be expected, but in the perpendicular direction, parallel to the “long side,” the cross section was curved, like a triangle bent towards a parabola. This distortion should lead to a conductance that depends on the direction of the current, a property not found in graphene but one that could be exploited in nanoscale electronic devices, Görling says. Another potentially useful property of this graphyne is that it should naturally contain conducting electrons and should not require noncarbon “dopant” atoms to be added as a source of electrons, as is required for graphene.


The big challenge now is to make large graphyne samples. “Organic chemists like myself can synthesize (often with difficulty) complex molecular subunits,” but these small sections of graphyne do not exhibit the expected properties of a large lattice, says Michael Haley of the of in . Andre Geim of the University of Manchester, UK, who was awarded the 2010 Nobel Prize for his experimental work on graphene, says that graphyne is “an extremely interesting material, and this report adds to the excitement.” He only hopes it won’t take 60 years for experimentalists to make the excitement a reality this time.