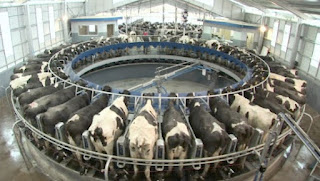 The CDC deserves this study just because they are aggressively suppressing any form of raw milk sales whatsoever using the worst police type tactics.

This study is an outright indictment of the dangers of the present systems of industrial agriculture that have never been properly vetted let alone truly tested for the obvious dangers now been addressed.

You the consumer has no knowledge of what has been done to deliver milk to your table.  The protocols described here will certainly maximize milk production, but also at the clear price of the implied quality issues.  The problem today is that these issues have not been addressed clearly yet it is already in our food supply.

All of a sudden big dairy faces the real risk of a plausible class action suit because they did not fully vet their practices.  That is what they are playing with.

This puts herd quality back in the hands of the individual operator who has a reputation to protect.  The rest after that is applying good science even to the point of using alternative pasteurization methods possibly at the farm level.  The present technology is also usable at that level for a hundred head of cattle with a little engineering.

(NaturalNews) The truth has once again shaken the foundation of the 'American Tower of Babel' that is mainstream science, with a new study out of Harvard University showing that pasteurized milk product from factory farms is linked to causing hormone-dependent cancers. It turns out that the concentrated animal feeding operations (CAFO) model of raising cows on factory farms churns out milk with dangerously high levels of estrone sulfate, an estrogen compound linked to testicular, prostate, and breast cancers.


Dr. Ganmaa Davaasambuu, Ph.D., and her colleagues specifically identified "milk from modern dairy farms" as the culprit, referring to large-scale confinement operations where cows are milked 300 days of the year, including while they are pregnant. Compared to raw milk from her native Mongolia, which is extracted only during the first six months after cows have already given birth, pasteurized factory milk was found to contain up to 33 times more estrone sulfate.


Evaluating data from all over the world, Dr. Davaasambuu and her colleagues identified a clear link between consumption of such high-hormone milk, and high rates of hormone-dependent cancers. In other words, contrary to what the  Centers for Disease Control and Prevention (CDC), the  Department of Agriculture (USDA), and the conventional milk lobby would have you believe, processed milk from factory farms is not a health product, and is directly implicated in causing cancer.


Meanwhile, raw, grass-fed, organic milk from cows milked at the proper times is linked to improving digestion, healing autoimmune disorders, and boosting overall immunity, which can help prevent cancer. Though you will never hear any of this from the mainstream media, all milk is not the same -- the way a cow is raised, when it is milked, and how its milk is handled and processed makes all the difference in whether or not the end product promotes health or death.

Of particular concern are new provisions in the 2012 Farm Bill that create even more incentives for farmers to produce the lowest quality, and most health-destroying, type of milk possible. Rather than incentivize grazing cows on pastures, which allows them to feed on grass, a native food that their systems can process, the government would rather incentivize confined factory farming methods that force cows to eat genetically-modified (GM) corn and other feed, which makes them sick.


As it currently stands, the government already provides incentives for farmers to stop pasturing their animals, instead confining them in cages as part of a Total Confinement Dairy Model, aka factory farms. But the 2012 Farm Bill will take this a step further by outlawing "component pricing" for milk, which involves allowing farmers to sell milk with higher protein and butterfat at a higher price.


Allowing farmers to sell higher quality milk at a higher price provides an incentive for them to improve the living conditions on their farms, and milk better cow breeds. But the government would rather standardize all milk as being the same, and create a system where farmers continue to produce cancer-causing milk from sick cows for the millions of children to drink.

http://www.naturalnews.com/035081_pasteurized_milk_cancer_dairy.html#ixzz1nZ0l7xKY
Posted by arclein at 12:01 AM