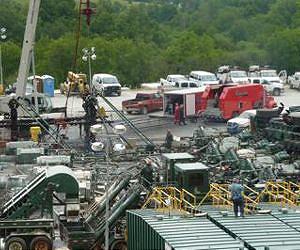 Maybe or maybe not.  The problem is that recovered fluids need to be handled, and this means recycling were possible and reinjection into another formation able to absorb the water.  Generally, this is not the problem in most geological settings.  The problem is the spurious roadblocks thrown up by activists whose sole aim is to interfere with any new production as much as possible.

At least the operators are not attempting to simply toss it all into the .

What is totally clear, is that all politicians are distancing themselves from this freight train.  They know a political loser when they see one.  After all, after two generations of sucking up to the Saudis, this technology is swiftly freeing us of ever buying another drop of Saudi oil or gas.  What is more, it is in their backyard and visible as hell.

Even Obama knows he does not need to paint a huge bull’s eye on his back for republicans to shoot at.  That is why the turn down of the Keystone pipeline was a document only a lawyer could love.  It was actually a conditional approval written to ensure that no mistakes were made that they could not slither past.

It is presently strategically important for to become energy independent.  Within the next three to five years we will be in a position to strand any Oil producer who annoys us.

This means that environmental concerns will be worked through, but it is all going ahead.

In his State of the Union address, President Barack Obama praised the potential of the country's tremendous supply of natural gas buried in shale. He echoed the recommendations for safe extraction made by an advisory panel that included geophysicist Mark Zoback.

The panel made 20 recommendations for regulatory reform, some of which go well beyond what the president mentioned in his address.

The topic is controversial. Breaking up rock layers thousands of feet underground with hydraulic fracturing has unleashed so many minuscule bubbles of methane that shale gas now accounts for 30 percent of U.S. gas production, an increase in supply that has pummeled the commodity's price. The gas industry will support more than 600,000 jobs by the end of the decade, Obama said.

But environmental concerns about the technology behind the boom - specifically hydraulic fracturing - receive near daily news coverage, with opponents saying that toxic additives in the water used for the fracturing have found their way into household tap water, among other concerns.

Obama said natural gas producers will have to disclose the chemicals they add to the fracturing slurry of water and sand when they are working on federal lands. The Secretary of Energy's seven-person advisory group on shale gas, of which Zoback was a member, called for such disclosure by shale gas operators on all lands. The advisory group further recommended that data on a well-by-well basis be posted on publicly available, searchable websites.

"The problem is that the president only has jurisdiction over federal lands, while states regulate development on private land, where most of the shaleformations are found," Zoback said.

"The so-called 'Halliburton exclusion' passed by Congress says gascompanies don't have to disclose the chemicals in fracturing fluids. That was a real mistake because it makes the public needlessly paranoid."

The chemical additives used during hydraulic fracturing are really not a serious issue, Zoback said at the Precourt Institute for Energy's weekly Energy Seminar. The problem lies elsewhere: Once water is injected into the shale, it can pick up naturally occurring selenium, arsenic and iron, a lot of salt and even radioactive particles.

Thus, when this water flows back up the well, it has to be disposed of properly. What gas companies do with that water is a serious regulatory problem. Typically, they either reuse it or inject it into deep saline aquifers, Zoback said, and regulators must monitor the safe disposal of the water.

"In western , the gas companies initially said that recycling water used for hydraulic fracturing couldn't be done economically," Zoback said. "But because there were really no good options for safe disposal, they now recycle 95 percent of the water used, and it's not a big deal." Much is still to be discovered about the rapidly expanding technology, Zoback said.

"I think it is fair to say that the bigger producers have no problem with our 20 recommendations. The question is whether state regulators will implement them and small companies will be forced to follow them as well as large ones," Zoback said. "That's of great concern to us."

Obama cited shale gas development as justification for federal investments in clean energy technology, which have been under attack since the bankruptcy of solar panel manufacturer Solyndra, which received federal loan guarantees on about $500 million it borrowed.

"Public research dollars, over the course of 30 years, helped develop the technologies to extract all this natural gas out of shale rock - reminding us that government support is critical in helping businesses get new energy ideas off the ground," the president said.

"Payoffs on these public investments don't always come right away. Some technologies don't pan out; some companies fail. But I will not walk away from the promise of clean energy."

If well regulated, the enhanced gas supplies could cheaply supplant coal as the main source for electricity generated by burning fossil fuel, which would go far in reducing the threat of climate change, Zoback said.

Gas produces half the carbon dioxide of coal per kilowatt-hour of electricity produced. And major oil companies are investing heavily to develop natural gas liquids to displace gasoline and diesel fuel in transportation, which could improve economic and national security.

"Gas is the bridge fuel to a decarbonized future, not a way of sustaining business as usual," Zoback said.
Posted by arclein at 12:01 AM