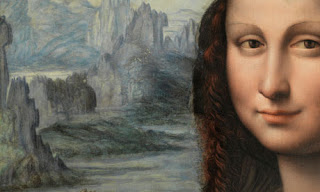 This is a neat bit of news.  Here it is discovered that a painting originally thought to be a copy of the Mon Lisa actually happens to have been painted at the same time as was the original.  More importantly, they are restoring this painting and we are appreciating the underlying quality of the original that is awaiting the same restoration.  Or at least I hope so.

This painting would have even been made from the same paints as the original and thus it represents an excellent check on restoration work.

The reason it is time to contemplate a proper restoration is because firstly, we can do it successfully with a high confidence.  The second reason is that our imaging and color replication technology is excellent enough that it will be possible to create a phenomenal electronic copy of the restored original that can then be available for display everywhere.

An original is always vulnerable no matter how stable the conditions in which it is kept.  An electronic copy ends that yet provides the detail quality a viewer demands.

A detail of the nearly conserved Leonardo da Vinci pupil's take of the Mona Lisa. The Prado has yet to finish conservation work on the whole painting. Photograph: Museo Nacional del Pradio Click on magnifying glass for full image

A contemporaneous copy of the world's most famous painting has been discovered by conservators at the Prado in , allowing us to see the Mona Lisa as she would probably have looked in the 16th century.

In art historical terms, the discovery is remarkable. The Prado painting had long been thought to be one of dozens of surviving replicas of Leonardo's masterpiece, made in the 16th and 17th centuries.

Now research presented to a recent symposium at the National Gallery suggests the painting was made by a copyist in Leonardo's studio at precisely the same time he was painting the original.

The original painting hangs behind glass with enormous security at the Louvre in Paris, a gallery it is unlikely to ever leave. There is no prospect of its being cleaned in the foreseeable future, meaning crowds view a work that, although undeniably beautiful, is obscured by several layers of old, cracked varnish. Put simply, she looks older than she is.
The newly discovered work offers a much fresher version of the enigmatic, captivating young sitter, generally acknowledged to be Lisa Gherardini, wife of the Florentine cloth merchant Francesco del Giocondo.

The story was broken by the The Art Newspaper yesterday, somewhat spoiling the Prado's intention to release the news to the world later this month when conservation was complete.

A gallery spokeswoman confirmed it had what is the earliest copy and that its true origins were only recently discovered. "The work has been in restoration for several months in preparation for an exhibition at the Louvre [entitled Leonardo's Last Masterpiece: The Sainte Anne]. The conservation process has not been finished. We are going to present the finished painting at the Prado in about three weeks."

At a press conference in on Wednesday Gabriele Finaldi, the Prado's deputy director collections, said: "It is as if we were in the same studio, standing at the next easel. You can imagine that this is what the Mona Lisa looked like back in the 16th century."

He and Finaldi said the museum's best guess was that the copy was done by an apprentice named Francesco Melzi, because of the style observed in it.

Besides the black background, one other difference from the original is the woman in the copy has eyebrows and the Mona Lisa in the real masterpiece does not.

Prado conservators removed the painting's dingy, black background to find – to their astonishment – a Tuscan landscape similar to that in the true Mona Lisa. The Art Newspaper's Martin Bailey, who saw images of the painting with 90% of the overpainting removed, said the discovery could transform our understanding of the original painting.

"It's funny as it is an image that you know but it's actually quite a different image from the one you know," he said.

"We are seeing Mona Lisa herself for the first time, as she really looked because the painting in the Louvre is covered with layers of dirt and varnish and it can never be cleaned because it is such an important masterpiece.

"Now we're seeing something that's much closer to Leonardo's original – we're looking at Lisa almost eye to eye, we can see her enticing eyes and enigmatic smile much more clearly. It makes her look much younger and more attractive than the rather more aged version of Lisa that we see in the Louvre."

Other discoveries led to the completion of the jigsaw. For example the symposium heard that the Prado painting was assumed to be on oak, which was rarely used in and was therefore assumed to be the work of a northern European artist. Conservators found it was on walnut, used in along with poplar, on which the true Mona Lisa is painted.

Infrared images of the Prado painting were compared with those from the original and conservators found that the underdrawings were similar – providing compelling evidence that the two works were executed at the same time.

The discovery comes as the National Gallery's blockbusting Leonardo show - the most complete display of his surviving paintings - comes to a close on Sunday after some of the biggest queues for any visual arts show.

The Mona Lisa itself continues to be one of the most written about and theorised paintings of all. It also has innumerable conspiracy theories surrounding it, whether it's Dan Brown suggesting in The Da Vinci Code that it provides evidence that Jesus and Mary Magdalene were a couple; or Italy's National Committee for Cultural Heritage suggesting last year that Leonardo had put really tiny letters and numbers in her eyes: LV in the right eye and CE in the left, or it might be B. In the arch of a bridge is 72, they said, or it could be L2.

But, The Art Newspaper reports, recent conservation reveals that the work was in fact painted by a pupil working alongside Leonardo.

The original painting hangs behind glass and with enormous security at the Louvre, a gallery it is unlikely to ever leave. There is also no prospect of it being cleaned in the forseeable future, meaning crowds view a work which that, although undeniably beautiful, has several layers of old, cracked varnish.

This newly discovered work – found under black overpaint – allows the viewer to see a much fresher version of the captivating young woman, generally acknowledged to be Lisa Gherardini, the wife of the Florentine cloth merchant Francesco del Giocondo.

The Prado said the restoration had been carried out over the past few months, less than a year, in preparation for an exhibition at the Louvre in March.

Details of the discovery were revealed at a recent Leonardo symposium of experts at the National Gallery in London, which is how the story emerged, thea spokeswoman said, adding that there was more conservation work needed and that the painting would not be revealed in its full glory for around three weeks.

"There is much more to see. The process of conservation is still going on, we have not finished."