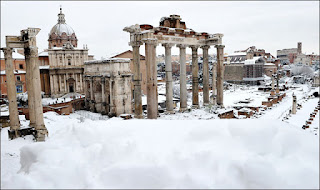 Perhaps it was time and perhaps it was ’s turn to be strongly reminded that the climate is quite able to mix up a nasty spate of lousy weather.  It can do this without a serious volcano, although we must not forget last year.

They have been getting snowed in, in and the temperatures are awful in .  Yet that was true during the first couple of years of WWII also.

The fact remains that Europe is at a high latitude that would otherwise mimic the Canadian Prairies and the American Midwest, but for the input of the .

Thus all that is needed to ruin your winter in is to have the climate conspire to redirect the warm air away for a while.  We get a taste of that in the Pacific North West were we are warmed in the winter months be the Pineapple Express from .  If we had no mountains, the European weather of the coast would do inland for a thousand miles.

The weather reality is that the climate is able to run a wide range of powerful working scenarios and some years we have to be unlucky.

is having a fair enough winter this year and last year we got blown away.  Perhaps it was ’s turn

I remained very concerned that we may still get a serious Icelandic eruption that chills the and dumps us into a string of bad winters we could do without.

The first major snowfall in for 26 years has led to the closure of the world-famous Colosseum over fears that tourists could slip on the icy ruins.

The cold weather also left buses struggling to drive up the Italian capital's slushy hills, and cars without tyre chains were temporarily ordered off the road.

Scores of vehicles were blocked for hours on the ring road around the city after cars skidded and crashed.

Drivers frustrated at waiting for accidents to be cleared ended up abandoning their cars.
About 6cm (2.5in) of snow fell in many areas of the capital.

Authorities stopped visitors from entering the Colosseum, the adjacent Roman Forum and the Palatine Hill, the former home of 's ancient emperors.

However, those already inside the ruins before heavy snow began coming down were allowed to finish their visits.

The north of was hit far harder than , with a snowstorm dumping about 40cm (3ft) of the white flakes.

Authorities appealed to Italians to avoid unnecessary travel, as the cold spell was forecast to continue well into the next week.

The last substantial snowfall in occurred in 1986, though lighter snowfalls have occasionally and briefly blanketed the city since, including in 2010.

In , huge snowfalls trapped people in their homes and cars, and even prevented the presidents of neighboring and from getting home from a summit.

More than a metre (3ft) of snow fell on the capital, , trapping most people in their homes, and about 30 people spent the night in their vehicles in a tunnel south of the city.

At least 122 people have died in as a result of the bitterly cold weather that has swept the country over the past week, the emergencies ministry said.

Twelve people had died in hospitals and 32 in their homes while 78 had succumbed to the cold on the streets, it said.

More 3,000 shelters have now been set up to provide people with warmth and food.
Posted by arclein at 12:01 AM