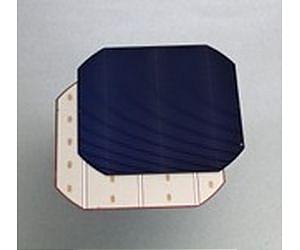 It appears that smart design configuration has allowed commercial grade solar cells to be produced with real efficiency in excess of 20% for the first time.  Plenty of lab top efforts has been claimed exceeding 20% but never for rolling of the assembly line.  This is great news.

It appears thus that this will also allow the industry to naturally retrofit upward to a higher power yield.

Innovation and material technology are the keys to success for increasing the efficiency of solar cells. For the first time ever, scientists accomplished the development of an industry-scale c-Si solar cell with an efficiency greater than 20%. The record cell is based on the combination of two cell design technologies: MWT and PERC.

What is an MWT-PERC solar cell?

How does an MWT-PERC cell work? As a crystalline solar cell, the MWT-PERC cell has a silicon wafer at its core. MWT stands for "Metal Wrap Through".

For MWT cells, the busbars typically found on the front-side of conventional solar cells, are shifted to the backside of the cell, thereby reducing front-side shading and allowing more light to actually hit the cell. The reduction of shading increases the efficiency. The additional benefit is less paste is required. "PERC" stands for "Passivated Emitter and Rear Cell".

For PERC cells, the back-side of this cell is designed so that incoming light is reflected back to the wafer, increasing the amount of energy captured from the cell. The combination of these two technologies creates a cell design that significantly increases a solar cell's efficiency relative to conventional solar cell technologies.

The paste is screen-printed on solar cells and subsequently incorporated into the cells during a high temperature process. This process is known as a sintering process. Precisely formulated silver metallization pastes enable an optimized efficiency gain of the solar cell.

Heraeus offers their customers pastes that are specially formulated to be used for novel cell design technologies, such as the MWT-PERC-concept. Of course, there is a broad range of different pastes for the front-side and back-side metallization of conventional crystalline solar cells available. In 2011 Heraeus introduced a new series of pastes for low temperature processing.