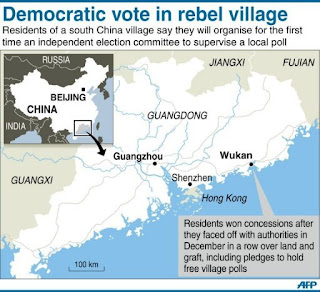 With all the expected foot dragging, is beginning to accept pluralistic democratic principles at the first rungs of authority.  Political reform in needs to be done thusly in what I like to call natural stages.  A first tier accustoms the population to the process and to actively choosing and judging candidates.  A few years go by (not many) in which leaders are shaken out and sufficient cadre is established that allows a fair shift up to another tier of authority say at the provincial level, although in China, I think that the provinces are co large that they need their own sub divisions.

The process could be finished in around ten years, in which all leadership under the National level are clearly elected and deemed accountable to the electorate.  That then sets the stage for a formal National election that chooses the highest levels and the presidency.

I consider this a natural process and the recent revolt in Wukan is merely a way to inform the leaders that foot dragging will no longer be accepted.  Expect top see many moiré such actions ending in more independent villages and ultimately becoming custom.

I suspect that the leadership is no longer afraid of democratic process and will merely slowly retreat from authority.  I call it a little bit of creative tension.

Map showing the village of Wukan in southern China

A Chinese village which staged an extraordinary rebellion against authorities last year has taken a key step in a process to freely elect its own governing committee, according to residents.

Thousands of residents of Wukan in the southern voted Saturday for more than 100 representatives who will put forward candidates for a seven-member village committee to be elected in March, they said.

The move followed protests by the village last December when they faced off with authorities for more than a week in an uproar over land grabs.

The demonstrations prompted a drawn-out stand-off with police and officials, but the provincial government eventually capitulated and sought to pacify the villagers as their case made headlines.

Wukan residents said their former leaders had never before allowed these polls to go ahead in an open fashion, and instead selected members of the village committee behind closed doors.

Saturday's election of village representatives was reported by the official Xinhua news agency, showing the exercise in democracy is taking place with the blessing of authorities.

"The village representatives will suggest a list of candidates and all villagers have the right to vote for the village committee," Yang Yinqiao, who is helping oversee the process, told AFP.

-- a one-party state where top leaders are not elected by the people -- does allow rural residents across the country to vote for committees to represent them in what are known as "village elections".

Hong Ruiqing, one of the 107 newly elected village representatives, said the job included communicating with people.

"We work with the people to get tasks done," she told AFP.

Village committees, which aim to give people a say in government, are still ultimately beholden to the ruling communist party.

But one of the revolt leaders, Lin Zuluan, was named village party chief in January, replacing the businessman who had been Wukan's leader for 42 years and who was accused of stealing village land and selling it to developers.

The villagers' anger boiled over following years of complaints after detained community leader Xue Jinbo died in police custody in December due to an alleged beating.

The daughter of the late Xue Jinbo was among those elected as village representatives.

"I did this only so that I will have a chance to finish the thing that my father did not finish," Xue Jianwan said on her microblog.

A top official last year said that the Wukan protests, which attracted worldwide media attention, resulted from a failure by local leaders to address the complaints of villagers.

Zhu Mingguo, deputy Communist Party secretary for Guangdong, also warned of further unrest in if such problems were not handled correctly.

China lays great emphasis on the need for stability and social harmony, and analysts say its paramount concern is to be seen to be able to manage unrest.