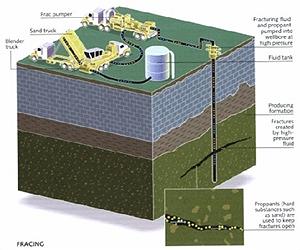 Perhaps a little real science and a touch of sanity can creep into the fracking debate, whose major crime seems to be that they show up next door one day and set up a portable industrial site for a month or two before they head of down the road to do it again.

Discovering strange gases in ones drinking water is hardly a surprise in land that is sedimentary in nature and may even be active underfoot.  On top of all that, every coal seam is a natural source of methane once any pathway is created.

Fracking goes deep and long to actually do its magic and has a mountain of material between its working zone and the surface.  On top of that the casing is cemented deep into the formation to naturally block any possible leakage.  That is why operators have so much confidence in their work in the first place.  In fact they have to be that good to be sure that the fracking procedure itself will take properly.

In the meantime, the procedure is employing tens of thousands to do wells that actually need to be replaced rather quickly in terms of new production because a fracked well has a steep decline curve although it will likely produce modestly forever.  What is neat is that we are sustaining our needs with what is almost mainly flush production.  I do not have specific statistics on this although we will eventually but unlike other booms, the drilling does not end someday that easily.

This is not a case of punching a conventional well in at a great initial test, then tamping production back to a couple hundred barrels per day in order to allow reservoir movement to replenish the supply.  With fracking I suspect it is in one’s interest to draw the fluids out quickly in order to recover the fracking fluids also and this mobilizes the easy oil.

This study is a sober assessment of the engineering and worth the read to settle fears.

The study, "Fact-Based Regulation for Environmental Protection in Shale Gas Development," by the Energy Institute at the of at says that many problems attributed to fracking have other causes, such as "casing failures or poor cement jobs."

Study authors say the report stems from a self-funded initiative at the Energy Institute and no industry funds paid for the study.

"Our goal was to provide policymakers a foundation for developing sensible regulations that ensure responsible shale-gas development," Charles Groat, an Energy Institute associate director who led the research, told the Fort Worth Star-Telegram.
"What we've tried to do is separate fact from fiction."

The research team looked at reports of groundwater contamination in three shale plays: the Barnett Shale in north , Marcellus Shale in and the Haynesville Shale in and eastern .

A lack of baseline studies in areas of shale gas development, the study says, makes it difficult to evaluate long-term, cumulative effects and risks associated with fracking.

Still, the study said that "natural gas found in water wells within some shale-gas areas ... can be traced to natural sources and probably was present before the onset of shale-gas operations."

Surface spills in gas development pose greater risks to groundwater than fracking itself, the study says.

Justin Furnace, president of the Texas Independent Producers and Royalty Owners Association, welcomed the study, telling the Chronicle that it "echoes what we as an association have been saying: The process is very safe and has been in place for 60 years."

Scott Anderson, a senior policy adviser for the Environmental Defense Fund, in a posting on his blog said the study "does not mean such contamination is impossible or that hydraulic fracturing chemicals can't get loose in the environment in other ways (such as through spills of produced water)."

EDF helped develop the scope of work and methodology for the study.

"In fact," continued, "the study shines a light on the fact that there are a number of aspects of natural gas development that can pose (a) significant environmental risk."
Posted by arclein at 12:01 AM