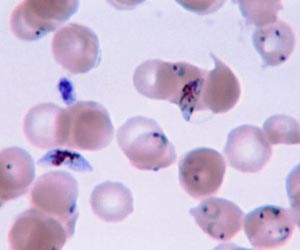 This is an oddity and noteworthy.  The malaria parasite is a genetic outlier meaning that the layout of its DNA is so different that we cannot use established methods to determine gene function.  In this case they are forced to work with a close relative to indirectly infer functionality and one wonders just how well that might work.

We clearly need to develop more single cell platforms to investigate the possible DNA variations available.    This is a little like discovering a library after working one’s way through a book but also represents opportunity as it has shown the way to uncover information already.

There is a grammar and even a language here that should succumb to rational order eventually.

The parasite that causes malaria is a genetic outlier, which has prevented scientists from discovering the functions of most of its genes. Researchers at National Jewish Health and

This new approach led them discover a new gene involved in lipid synthesis, and opens the door to further genetic discovery for the entire organism. This should foster a much greater understanding of the parasite, and facilitate discovery of new medications for a disease that infects more than 200 million people and kills nearly 700,000 every year.

"The malarial genome has been a black box. Our technique allows us to open that box, so that we can learn what genes in the most lethal human parasite actually do," said Dennis Voelker, PhD, Professor of Medicine at National Jewish Health and senior author on the paper that appeared in the January 2, 2012 , issue of the Journal of Biological Chemistry. "This could prove tremendously valuable in the fight against a disease that has become increasingly drug-resistant."

The genome of P. falciparum was sequenced in 2002, but the actual functions of many of the organism's genes have remained elusive. One of the primary methods for discovering gene function is to copy a specific gene, insert it into a model organism that is easy to grow, often the yeast Saccharomyces cerevisiae, then draw on the incredible knowledge base about yeast and its abundant genetic variants to discover how that inserted gene changes the organism's biology.

DNA is composed of building blocks with the shorthand designations A,T,C and G. The genome of P. falciparum is odd because it is particularly rich in A's and T's. Because of this A-T-rich nature, P. falciparum genes generally do not function when they are inserted into other organisms. As a result, scientists have been largely stymied when trying to understand the functions of P. falciparum's genes.

"This technique could lead to an explosion in knowledge about malaria and the parasite that causes it." said Dr. Voelker.

The researchers used the technique to discover a new gene involved in the synthesis of lipids in cell membranes of P. falciparum. The gene, phosphatidylserine decarboxylase, directs the formation of a protein unique to malarial parasites and is a potential therapeutic target. For example, selective disruption of lipid synthesis in P. falciparum, would prevent the organism from making new cell membranes, growing and reproducing in human hosts.
Posted by arclein at 12:01 AM