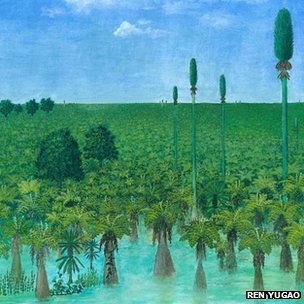 There is surely many more such time capsules world wide from every epoch that can be just as important in the preservation of the local flora and sometimes even the fauna although as Pompeii showed us that is not too likely.

This informs us even more clearly, that searching around volcanoes is an excellent idea and for the stated reasons below.  One earns a detailed window into a point in time allowing safe inferences both forward and backward.

Most archeological effort has been aimed at human history and even that rather narrowly.  This tells us that those methods need to look much deeper and much more bravely.  The human contribution may or may not exist and in any event it will be rare but the history of the flora is well worth understanding.

Researchers have unearthed a forest in northern preserved under a layer of ash deposited 300 million years ago.

Preservation of the forest, just west of the Inner Mongolian district of Wuda, has been likened to that of the Italian city of .

The researchers were able to "reconstruct" nearly 1,000 sq m of the forest's trees and plant distributions.

This rare insight into how the region once looked is described in Proceedings of the National Academy of Sciences.

The excavations sampled three sites across a large expanse that was covered with about a metre of ash.

Due to the pristine preservation of some of the plants, the team estimate the ash fell over the course of just a few days, felling and damaging some of the trees and plants under its weight but otherwise keeping them intact.

"It's marvelously preserved," said study co-author Hermann Pfefferkorn of the of in the .

Based on the findings, the team worked with a painter to depict what the forest would have looked like before the ash cloud descended.

Prof Pfefferkorn said that, as a particularly complete and well-caught moment in time, the forest would serve as a "baseline" for assessing future finds.

"It's like ," he said. "Pompeii gives us deep insight into Roman culture, but it doesn't say anything about Roman history in and of itself.

"But on the other hand, it elucidates the time before and the time after. This finding is similar. It's a time capsule and therefore it allows us now to interpret what happened before or after much better."