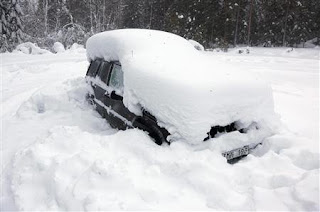 However one reads this story, the fact remains that this person apparently went into a form of hibernation unless he has a really good story to tell us when he fully recovers.  This could have serious medical value as it is obvious that his body temperature dropped by several degrees and he survived with little water and no food.

Again we want to hear his story, if he has any recollection at all.

That he aroused himself is likely a result of the noise of the Snowmobiles as that would allow him the time to do so.

In the meantime, it needs to be studied as this could allow severely injured patients to be handled.  It really is a wonderful revelation along side what we already know about cold water emersion and drowning recovery.

Our doctors need to be braver in trying these protocols.

STOCKHOLM (Reuters) - A Swedish man was dug out alive after being snowed in to his car on a forest track for two months with no food, police and local media reported on Saturday.

The 45-year-old from southern  was found on Friday, emaciated and too weak to utter more than a few words.

He was found not far from the city of in the north of by snowmobilers who thought they had come across a car wreck until they dug their way to a window and saw movement inside.

The man, who was laying in the back seat in a sleeping bag, said he had been in the car since December 19.

"Just incredible that he's alive considering that he had no food, but also since it's been really cold for some time after Christmas," a rescue team member told regional daily Vasterbottens-Kuriren, which broke the news.

Ebbe Nyberg, duty officer at the Umea police, said police saw no reason to doubt that the man had been stuck in the car for a very long time.

"We would not make something like this up. The rescue services were on site too and saw the same as us," he told Vasterbottens-Kuriren.

Umea University Hospital, where the man is recovering after being rescued by police and a rescue team, said in a statement he was doing well considering the circumstances.

Doctors at the hospital said humans would normally be able to survive for about four weeks without food. Besides eating snow, the man probably survived by going into a dormant-like state, physician Stefan Branth told Vasterbottens-Kuriren.

"A bit like a bear that hibernates. Humans can do that," he said. "He probably had a body temperature of around 31 degrees (Celsius) which the body adjusted to. Due to the low temperature, not much energy was used up."

Why the man ended up under the snow in the forest remains unknown, police said.