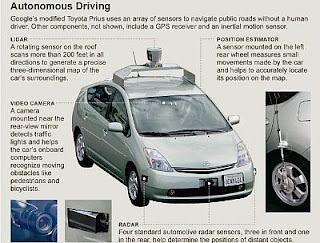 This is starting to get serious.  The regulatory requirements presently remind me of the introduction of the horseless carriage when it was regulated that a flag man walked in front.  I think that the capability is already there and we are very much in the shake out part of product development.

The time is coming in which our driving skills will atrophy for lack of use.  I for one will not miss that at all, unless you believe been fully engaged in operating a vehicle for around two hours a day is the best possible use of your time.

Somehow everybody will become an active consumer of information while sitting in their vehicle that is whisking them to their destination.

I expect that this may show up first in public transit as they run predetermined routes anyway and if they could not be served, it is unlikely anything else makes sense.

Cars Without Drivers: Get Ready to See Automated Automobiles on the

It's time for the next big automotive revolution.

A century ago, the horse-drawn carriage became obsolete. Within the last decade, GPS technology rendered paper maps useless. And if the electric movement gets going in earnest, gasoline may one day be a thing of the past.

Next on the chopping block: the need for human drivers.

Google is behind this development.  For years, they've been developing the technology to make automated cars a reality. They've also spearheaded lobbying efforts in , which just became the first state to approve regulations for testing driverless cars. This gives technology companies an official procedure for taking their self-driven automobiles out on public roads.

Now, companies must pay the Nevada Department of Motor Vehicles anywhere from $1 million to $3 million in order to test driverless vehicles. They must specify exactly where they plan to run these tests, and show that their cars will be capable of handling those environments. And unless otherwise specified by the Department, there must always be two occupants in the vehicle; one must be in a position to take control on case of an emergency. The state released a full set of regulations on their website.

already legalized driverless cars back in June of last year, but there was no a legal framework in place for companies to test their vehicles. Now, Google and other technology firms have the green light to get on the road.

This is not to suggest that Google has been waiting patiently for legal permission. They were awarded a patent for self-driving technology in December of last year, and they've been developing the technology since 2008. And they've been conducting tests on California roadways for months, logging roughly 200,000 miles. Without laws in existence to regulate the legality of that testing, this was a risky move -- but it has paid off. Now Google is a pioneer in the field, with cutting-edge technology that uses GPS maps, innovative sensors and backup safety mechanisms to prevent accidents.

Consumers will likely have to wait several years before these machines hit the market, but they can look forward to a range of benefits. These automobiles can increase mobility for disabled people, ease traffic by reacting intelligently to other cars on the road, and promote safety. Unlike humans, automated cars don't get tired, drunk or distracted.

"We want to improve people's lives by making driving safer, more enjoyable, and more efficient. Over 1.2 million people are killed in traffic worldwide every year, and we think autonomous technology can significantly reduce that number," said a Google spokesperson via email.

"As for next steps... we're continuing to develop and refine the technology, and we will continue conversations with state and federal authorities, but we aren't going to elaborate about specific plans at this point."