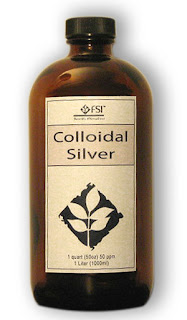 Colloidal silver has been with us for a long time and certainly needs to be revisited with the full weight and attention of modern method to fully refine its therapeutic value.

That the overuse produces a benign effect that causes graying of the gums actually serves as a natural warning to the user not to go further.  The real take home is that it is not toxic even to these levels or it would have attracted plenty of negative attention.

It certainly needs to be applied more to tackle known infections.  This way we will produce a body of empirical practice that is well known.

It is also worth knowing that it is effective against the infamous flesh eating disease that ha popped up occasionally over the past few years to the point that doctors are well aware of it and are on the lookout for it.

See all articles by this author

(NaturalNews) More than 90 years ago doctors and health practitioners discovered the life-saving, disinfectant and germicidal properties in colloidal silver. Anecdotal evidence has confirmed its efficacy as a natural antibiotic, anti-viral and anti-fungal agent. The FDA, however, doesn't agree and ruled in 1999 that all colloidal silver products sold over-the-counter are unsafe and mis-branded. They state they are unaware of any substantial scientific studies or evidence that support its use for the treatment of serious disease. This is one more area where government regulators being influenced by Big Pharma are attempting to discredit the efficacy of a highly effective natural treatment for infections. Read the details of the FDA ruling here:
http://www.fda.gov/ohrms/dockets/98fr/081799a.txt

Colloidal silver is made by suspending microscopic particles of silver in liquid. Silver has been used for hundreds of years not only medicinally, but as a preservative to keep water and milk fresh because it prevents the growth of algae, bacteria and other unwanted organisms. Colloidal silver was used extensively as a natural antibiotic until the 1940s when the advent of "modern" antibiotics became popular.

Over use of colloidal silver can result in a condition called argyria, where the skin and mucous membranes turn gray or blue-gray in color as a result of the silver particles depositing in the tissues and oxidizing when exposed to air and sunlight. Some people are more prone than others to developing this condition, especially those with low vitamin E and selenium levels and those with slower metabolisms. The first signs of argyria are when the gums turn grayish-brown in color.

There are compelling reasons both pro and con for the medicinal use of colloidal silver; however, in light of the lack of efficacy of many antibiotics and the invention of super drugs to kill super bugs, one wonders where the risk really exists. Should you take larger and stronger doses of super-killing antibiotics that often fail to work to fight infections? Absolutely not! Should you use colloidal silver in large quantities, long term? It's probably not a great a idea. Will colloidal silver provide an effective medicinal agent for killing noxious bacterial infections, life-threatening flu viruses and systemic fungal infections? Most likely it will, based on the evidence of the past. Individuals choosing to use colloidal silver should use caution and only take it to treat the existing disease, rather than ingesting large doses daily for long periods.
Other medical uses
Disinfectant

Colloidal silver makes an excellent topical application for scrapes, wounds, cuts and sores, acting as an antiseptic to destroy bacteria. In addition, clinical evidence points to its efficacy in eradicating vaginal yeast fungal infections with topical applications and douching.

Possibly one of the most important medical roles for colloidal silver is it's ability to destroy deadly pathogens like methicillin resistant staphylococcus aureus, or MRSA, the flesh-eating super bug. The MRSA cure was discovered during research in the 1970s at Syracuse University by Robert O. Becker, M.D. Becker's research has been all but discredited by the FDA who helped to downplay his findings. Funding for continued research dried up in 1980, forcing Becker to close his lab and stop his research. At that time he was on the verge of huge breakthroughs in human organ and tissue regeneration.

Colloidal Silver: The Undisputed Cure for MRSA and Other Deadly Super-Pathogens
http://www.colloidalsilvercuresmrsa.com/mrsa_cure.htm

JB Bardot is trained in herbal medicine and homeopathy, and has a post graduate degree in holistic nutrition. Bardot cares for both people and animals, using alternative approaches to health care and lifestyle.

When I was in Africa I ran into a girl who had a Flesh eating disease all over her right arm, the top of her chest, and half way down her back. I asked the villagers if she had seen a Doctor, and they said yes, she had gone to several Doctors but there was no cure for the disease. I asked what would happen to her? And they said that the disease would soon spread down her chest and eat through her stomach, and her guts would burst open and she would die. I said O my God we need to try to do something to help her!

I explained to her that there were little tinny bugs inside the scabby disease that were eating through her skin, and that she needed to try to soak off in water as much of the scabby disease as possible. Then put a little bit of water on top of the bar of Ivory Soap and rub it to make a paste, and dab the paste on the raw open wounds. I told her that it would burn like hell for a minute or so, but then it would start to feel much better. I told her to leave the soap on the wounds all the time to keep them from getting infected, and to wash it off and apply new soap twice a day.

I had to leave to work on a dam project, but 8 weeks later I returned to her village and it had killed the disease. You could see the new skin on her back and there was no ugly scaring or discoloration of skin.

Fantastic! We forget that many nasty bugs are external to our immune system and that is why they are able to sustain their attack. I leaned to resolve chronic sinusitis by the simple expedient of introducing very dilute hydrogen peroxide (Three to one with one percent works - three drops each nostril)into my nostrils. It worked perfectly and ended a twenty year annoyance. Coating with soap should also be more commonly applied on a bare wound.

I recently turned someone onto colloidal silver. She has been fighting the flesh eating problem for two years on her leg with no new skin growth results. Now after two months of treatment she has aprox. 25 percent new skin growth.

How many ppm silver for flesh eating disease?