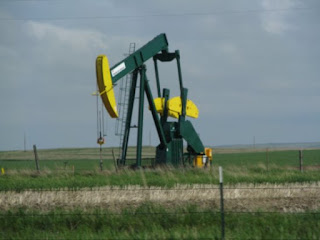 Some thoughts here on the prognosis of oil prices over the near and medium term.   The current reality is that the North American Market is able to exit the global oil market over the next five to ten years.  This is putting strain on the other market participants who now must lock up customers.  Fortunately and are coming on strong, but not so strong that they can support a rising price regime.

My point is that this all works at this price level and plausibly somewhat lower as large Iraqi supplies also hit the market.

In the meantime the conversion to electrical vehicles has begun and is effectively out of its infancy and is about to be come robust as we shift in the coming decade to a full electrical car system.  This will throw an additional 7,000,000 barrels of North American oil out on the same market toward the end of the decade.

However we cut it, the supply side of oil is shifting into supply nightmare with contracting markets racing ahead of fresh expensive oil.  This is the decade we leave the oil age.

This will happen even if we did not have the Rossi Focardi reactor hitting the market already to supply unlimited electrical power and surplus heat.  That technology is the end of nuclear and coal.

In short I am a super bear on the energy industry generally and think that all the changes are upon us now and simply have not been felt yet.  Present noise is the last hiccups before reality catches up to the industry itself.

The end game is about to begin. On the one hand you have the noise and rhetoric. Greedy speculators gouging gasoline prices; mad mullahs preparing to wipe Israel off the map; bunker buster bombs and fleets being positioned; huge demand for oil from the BRIC countries; China’s insatiable thirst for oil; the oil price will head for $200 a barrel and will never again fall below $130 …

On the other hand you have the reality.

The oil markets are completely manipulated and orchestrated, and the conductors of the orchestra have the benefit of having already held a rehearsal in 2008.

History never repeats itself, but it does rhyme. This time around it is not demand from the that is collapsing, but European Union and demand, as oil prices in euros and pounds sterling have never been higher. In the meantime, the is awash in oil as domestic production quietly increases, flushed out by the high prices.

As I have outlined in previous articles, the culprit for the high oil prices between 2009 and 2012 – with the exception of the speculative “spike” between March 2011 and June 2011 driven by and Libyan price shocks – has been passive investment by risk-averse investors, which enabled producers to support oil prices at high levels.

Much of this passive money underpinning the market and enabling producers to monetize inventory pulled out of the market in September 2011, and another wave pulled out in December 2011.

What is now happening is the end game: an orchestrated wave of noise that is drawing in speculative money. This is enabling the producers who are actually in the know to hedge by selling production forward during what they confidently expect will be a temporary – and pre-planned – managed fall in the oil price.

The smartest kids on the block knows that gasoline prices much over US$4 per gallon will be both deflationary and lethal to President Barack Obama’s re-election chances. So that won’t happen other than briefly.

I am by no means the only commentator who has pointed out the complete counter-productivity of these oil sanctions. The smart kids are well aware that oil sanctions are completely useless, and simply enable to fill its strategic reserves at a discount to the market price at the expense of and in particular.

But the has been quite happy to let the EU – as useful idiots – take the economic hit. The high oil prices caused by all this noise and nonsense are actually a net benefit to – which rattles its sabre loudly as elections approach.

The effect of a managed decline in oil prices to, and probably over-correcting well through, $60 a barrel – which is coming fairly soon – will be extremely beneficial to the in two ways.

Firstly, it will be catastrophic in particular for , and – not exactly on the White House party list – whose hugely oil-dependent revenues will collapse. The ensuing economic mayhem will open these countries up to regime change and to rescue plans which Wall Street will be dusting off.