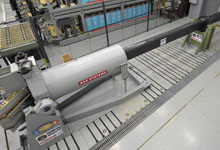 The rail gun is every high school student’s dream machine. The only problem with it was that it consumed the firing mechanism.  Not much fun as a weapon’s platform.

This work is now informing us that this core problem has been overcome and perhaps we will get to know now someday.

The result is a weapon system that can now be mounted on a ship and perhaps someday on other mobile platforms.  Rapid rates of fire would also be welcome.

Another application for this weapon would be point defense of a city or base, particularly once the 200 mile range is realized.  Embedded sensing and aerodynamic controls would be sufficient to intercept an incoming missile and rapid fire could overwhelm even concentrated missile attack.

This can be a true successor of the naval gun and we are seeing great technology been developed.

“This is the next step toward a future tactical system that will be placed on board a ship some day,” said Roger Ellis, program manager of EM Railgun.

The EM Railgun launcher is a long-range weapon that fires projectiles using electricity instead of chemical propellants. Magnetic fields created by high electrical currents accelerate a sliding metal conductor, or armature, between two rails to launch projectiles at 4,500 mph to 5,600 mph.

With its increased velocity and extended range, the EM Railgun will give Sailors a multi-mission capability, allowing them to conduct precise naval surface fire support, or land strikes; cruise missile and ballistic missile defense; and surface warfare to deter enemy vessels. Navy planners are targeting a 50- to 100-nautical mile initial capability with expansion up to 220 nautical miles.

“This industry prototype represents a step beyond our previous successful demonstrations of the laboratory launcher,” Ellis said.

The industry demonstrator will begin test firing this month as the EM Railgun program prepares for delivery of a second prototype launcher built by General Atomics.

In the meantime, the Navy is pushing ahead with the next phase of the EM Railgun program to develop automatic projectile loading systems and thermal management systems to facilitate increased firing rates of the weapon.

“The next phase of the development effort is to demonstrate the ability to operate at a firing rate of significant military utility,” Ellis said.

ONR recently awarded $10 million contracts through Naval Sea Systems Command to Raytheon Corp., BAE Systems and General Atomics to develop a pulsed power system for launching projectiles in rapid succession. These new contracts kick off a five-year effort to achieve a firing rate of six to 10 rounds per minute.

About the Office of Naval Research

The Department of the Navy’s Office of Naval Research (ONR) provides the science and technology necessary to maintain the Navy and Marine Corps’ technological advantage. Through its affiliates, ONR is a leader in science and technology with engagement in 50 states, 70 countries, 1,035 institutions of higher learning and 914 industry partners. ONR employs approximately 1,400 people, comprising uniformed, civilian and contract personnel, with additional employees at the Naval Research Lab in Washington, D.C.
Posted by arclein at 12:01 AM