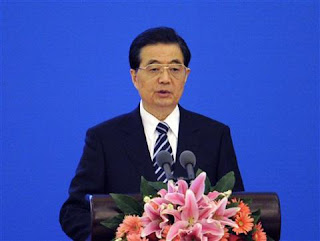 All dictatorships find it almost impossible to bite the bullet and allow a transition to democratic methods in order to manage the populations’ hopes and aspirations.  Yet the leaders have all experienced the turbulence of the American political system and often have taken the wrong lesson from it.  Now they are struggling with real turbulence without any safety valves except acquiescence as happened recently when villagers locked out the local cadres.

The noise over outside cultural influence is just that has gained a great deal more that it has ever given in terms of cultural product and over the next two decades we will see that reversed as we will see a steady rise in Chinese product that also sells in the rest of the world.  The reality is that culture is been totally globalised.

The only thing that makes China different is its sense of a long history going back in its written form some twenty five centuries and is only properly matched by Western history.  More properly though Western history actually began as a global society and antique civilization a full forty five hundred years ago with the emergence of the Bronze Age in 2500BC under the sea borne empire of the Minoans.   There is good reason to suspect that the Minoans both introduced bronze in as well as used their influence to build the pyramids in as effectively acknowledged by the Chinese.

If is the Middle Kingdom and Europe is the Western kingdom then Aztlan is the across the Pacific.

The communist party is waking up to its past due date and they have no way to refresh the brand except to do the unthinkable.  That is to fully introduce democratic forms at the lowest level of governance (already largely happening) and then allow staged democratization to take place as it rises up the ladder.

While they are at it, shove as much economic power down to the elected regimes as possible to fire up things from below.

What Is behind Hu Jintao’s caution against “Western Cultural Infiltration”?

Chinese leader Hu Jintao says Western influence will subvert . He may be right. 's reform is at an end.

In an article published in early January 2012 in the Communist Party policy magazine Qiushi , Chinese President Hu Jintao cautioned against Western culture infiltrating and subverting . In fact, the warning is one of the main points in a speech he gave last October at the Sixth Plenary Session of the 17th Party Congress. Now that it has been bill-boarded in the official Chinese press, the international media are trying to decode it. What is the actual message being sent? Is it just the same old talk of “guarding against peaceful evolution” (from one-party rule toward democracy) from the Mao era? Or is it something deeper? Below is a brief analysis.

Currently, China’s reform has reached a dead end, and the authorities are unable to offer up any halfway decent reform proposal prior to the 18th Party Congress slated to take place in October 2012. The reason for this inability is that the CPC ruling clique has completely degenerated into a self-serving special interest group. Any reform is bound to affect the interests of this elite and destabilize the one-party dictatorship—something that those in power would never allow. Below, I will look at the four plates of reform: politics, economics, society, and culture.

Political reform has been stagnant for many years now. This fact has been the crux of the intensification of all sorts of social conflict across , yet the authorities have absolutely refused to relinquish their monopoly on power. Economic reform is also in trouble—the most prominent cause of 's social conflict has long been the pattern of severely unbalanced and unjust distribution of benefits. This has led to a situation where the people are moving backward while the nation advances, where the people are becoming poor while the officials become rich.

However, any reform in ’s economic sphere is bound to affect the interests of the power elite and monopolistic enterprises and disturb the foundation of the one-party system, something that the authorities are not willing to tolerate. As for social reform, the priority task is reform of the household registration [hukou] system, which has been widely criticized for treating migrant workers from the countryside as second-class citizens. But the household registration system is the cornerstone of the authorities’ control over the entire society; once removed, they fear that they would lose social control. Moreover, they also fear that household registration reform might trigger a rise in the cost of labor, which would aggravate the current economic downtown.

In this situation, the Chinese authorities can only take the path of least resistance and make an issue of cultural system reform, which is just cosmetic. They are doing this because if they cannot produce any plans for deepening the reform program before the 18th Party Congress, they would have nothing to show for inside and outside the Party. This is the underlying reason for proposing reform of the cultural system at the Sixth Plenary Session of the 17th Party Congress.

Further, as China’s current economic development model becomes unsustainable, the authorities—by bringing state-owned cultural and news organizations into the market—are not only relieving a financial burden but also adding a new growth point to the economy, thereby stimulating an already tired and declining economy. This is their calculation.

But this is a double-edged sword. After bringing cultural news organizations into the market, the authorities are worried that these organizations would then be guided by market demands, which would make it even more difficult for the authorities to control the socially diverse public opinion that has been made possible by the Internet in recent years. This is the real consideration behindHu Jintao’s emphasis on vigilance against the ideological and cultural infiltration of hostile Western forces—both to show the authorities’ concern over the marginalization of the Party's culture and themes, and to pre-emptively guard against the side effects of cultural system reform, tightening the control of public opinion.

When trying to decode the Chinese authorities’ implementation of cultural system reform, most international media outlets have framed their commentary from the perspective that the reform is a strategy of the “great external propaganda campaign”—to promote soft power in a great nation’s foreign affairs. This is true, but only partially and superficially so. In its core are the imperatives of internal politics analyzed above; it is an expression of the fact that reform in is in a difficult spot and cannot find its way forward.