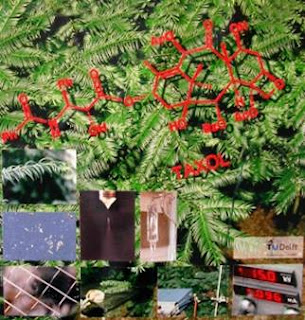 This is rather excellent news. We now have a biological pathway for breaking down our nastiest plastic that appears likely to be useful.  Artificial Taxol can be used in controlled settings though I suspect we will need to apply the living fungus were we need it most in our land fills.

We will never catch up to the junk sitting in the ocean which is a huge problem although I suspect natural pathways will surely catch up to all that also.  Our real problem remains landfills in which the plastic component resists easy destruction for decades.  Inoculating with a fungal agent is a perfect solution.

At least we now have hope that this problem can be eliminated,  Plastic fungal reduction and normal bacterial reduction will then ultimately reduce all carbon based components once and for all and the landfill will become neutral.

(NaturalNews) What if it was possible to eliminate much of the world's otherwise very-slowly-biodegrading plastic waste using a natural Amazonian fungus? Well, it just might be, thanks to research conducted by Jonathan Russell and colleagues from Yale University's Department of Molecular Biophysics and Biochemistry, who recently discovered that Pestalotiopsis microspora effectively eats away polyurethane (PUR) plastics, and is capable of using plastic as its sole food source in both aerobic and anaerobic environments.

Entitled Biodegradation of Polyester Polyurethane by Endophytic Fungi, the study aimed to find new potential plant sources of bioremediation, also known as the use of microorganisms to biodegrade and eliminate pollutants that otherwise persist in the environment. Several students attending Yale's annual Rainforest Expedition and Laboratory course collected various samples from the in the Amazon basin, and took them home for testing.

Of all the microorganisms tested, nine of the most active came from the Pestalotiopsis genus, which represents the first time endophytic fungi have been identified as having bioremediation properties. It was discovered that a key enzyme in this fungal genus known as taxol is responsible for eating away PUR, and that this "extracellular, secreted and diffusible" substance diffuses to "a significant distance," which means it has huge potential for large-scale PUR cleanup efforts.

"This is the first study that demonstrates PUR degradation by endophytic fungi," wrote the authors in their discussion. "The broad distribution of activity suggests that endophytes might be a promising source of biodiversity in which to test for activities important for bioremediation."

Taxol, which is also derived from the bark of Pacific Yew trees, happens to be the same enzyme used in conventional medicine to treat cancer patients. Though it is now administered to patients in synthetic, patented forms created by drug companies that now produce it using genetically-modified (GM) bacterium, taxol in its natural form has demonstrable anti-cancer properties, and has been used in native cultures by herbalists to treat disease naturally.

As interesting as this new discovery about taxol's PUR bioremediation properties may be, it is more than likely that, should this substance ever be used to eat plastics on an industrial scale, it will likely be derived from synthetic, patented sources rather than from natural sources. But as it currently stands, the Pestalotiopsis genus of endophytic fungi appear to be nature's built-in remedy for helping to keep the environment clean and toxin-free, as it already appears to be performing this function in rainforests around the world.

Learn more:
http://www.naturalnews.com/035077_fungus_plastic_bioremediation.html#ixzz1nYzcU2ft
Posted by arclein at 12:01 AM