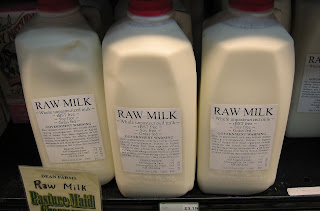 I continue to be disturbed by this obvious abuse of the unlimited enforcement power of government in what is a quasi legal attack on this particular individual with effectively any proper recourse.  In effect, they do this because they can.

Knowing how readily the regulatory power of government has been and can be gamed by money, we have little reason to trust that any form of justice or even common sense is been served here.  This is not an emergency nor is there a legitimate consumer risk to be actually found in the literature unless one wants to believe that a massive shift to raw milk at the expense of the monopoly milk producers is even possible.

This activity exists because there is little publicity except self serving press releases by the government agency involved against victims who are not savvy when it comes to public relations.

Somewhere in the center of this we may discover a politically ambitious individual who is working at packing his resume with the appropriate scalps.    What can be easier that an Amish Farmer?

Do we wonder why no one trusts government?

(NaturalNews) It is with much sadness that we report the two-year war waged by the Food and Drug Administration (FDA) against Amish farmer Dan Allgyer has been a success. The Washington Times and others are now reporting that, following a ruling last month by Judge Lawrence F. Stengel that Allgyer could no longer ship raw milk across state lines, he is officially shutting down his entire Rainbow Acres Farm.

Provoking Allgyer to shut down his farm appears to have been the goal of the FDA all along, which back on February 4, 2010, conducted a gestapo-style raid on Allgyer's , property to search for evidence that he was shipping raw milk across state lines. After illegally trespassing on the man's property, the agents proceeded to harass Allgyer about his supposed involvement in interstate commerce (http://foodfreedom.wordpress.com).

Just a few months later on April 20, 2010, the FDA again sent its Nazi-sympathizing thugs back to Rainbow Acres Farm, this time at 4:30 a.m. while Allgyer was still asleep, to conduct another raid. Violating the provisions of their so-called warrant, which specified that any inspection must be conducted during "reasonable times during ordinary business hours," the agents proceeded to once again ransack the farm in search of evidence to back their claims that Allgyer was engaged in illegal interstate commerce (http://www.naturalnews.com/029322_raw_milk_Amish.html).

Following this second sting, the FDA claims to have discovered the evidence it needed, and immediately sent Allgyer a warning letter notifying him that he was in violation of interstate commerce laws, according to their view (http://www.farmtoconsumer.org/aa/aa-26april2010.htm). The agency also filed a civil complaint against Allgyer around the same time.


With hundreds of happy and satisfied out-of-state customers that relied on him for fresh supplies of raw milk, Allgyer attempted to satisfy the FDA's demands by restructuring his farm's distribution process into private cow share agreements with customers. Such agreements allow individuals to directly purchase shares in the cows from which they get milk, which means they personally own them, and they are not subject to FDA jurisdiction.

Rogue judge essentially declares FDA has jurisdiction over private property use, in this case cows

But on February 3, 2012, Judge Stengel decided that Allgyer was still in violation of interstate commerce laws, even with the restructured cow sharing arrangements, and ordered him to stop distributing raw milk altogether. Private cow share agreements do not constitute interstate commerce, of course, but Judge Stengel apparently pays no regard to individual liberty, having declared that the FDA basically now has jurisdiction over private property use.


Likely worn down from the perpetual and never-ending harassment, Allgyer appears to have decided to simply give up trying to fight this unprecedented tyranny, and simply shut down his farm. Hundreds of families that relied on Allgyer for fresh milk, butter, cheese, eggs, and other nutritious goods will now have to find a new source for clean food, at least until the FDA shuts them down, too.


"I can't believe in 2012 the federal government is raiding Amish farmers at gunpoint all over a basic human right to eat natural food," said one of the farm's former customers, who wished to remain anonymous, to The Times. "In , they force taxpayers to pay for abortions, but God forbid we want the same milk our grandparents drank."

Learn more:
http://www.naturalnews.com/035000_Amish_farmers_raw_milk_feds.html#ixzz1mhFnAM3q
Posted by arclein at 12:01 AM