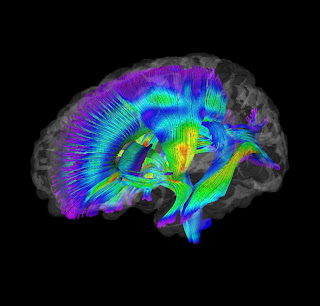 There is a biological pathway for the development of autism.  Perhaps now we can quit blaming the parents as happened in the past.  This is the most hopeful information I have seen yet on this disease and it is a clear route to both intervention as we presently know it, but also a research window allowing us to target the affected pathway.

Even better, chances are that we are looking at a pathway to an outright cure of this disease.  It is now there in front of us.

I hope we see quick results from this insight.

Brain Differences Found at 6 Months in Infants Who Develop Autism

ScienceDaily (Feb. 17, 2012) — A new study from the Infant Brain Imaging Network, which includes researchers at the Center for Autism Research at The Children's Hospital of Philadelphia (CHOP), found significant differences in brain development starting at age 6 months in high-risk infants who later develop autism, compared to high-risk infants who did not develop autism.

"It's a tremendously exciting finding," said Sarah Paterson, PhD, director of the Infant Neuroimaging Lab at CHOP's Center for Autism Research. "We found that the brains of the children who developed autism were markedly different even prior to the onset of behavioral symptoms of autism. Thus, our findings, while requiring replication, are a very important first step towards identifying a biomarker for autism risk. This would enable specialists to diagnose autism much earlier than what is currently possible through behavioral observations."

The study also suggests that autism does not appear suddenly in young children but instead develops over time during infancy, note the authors. Intensive early intervention has been shown to improve outcomes in children with developmental delays and autism.

"This research raises the possibility that we might be able to intervene even before a child is 6 months old, to blunt or prevent the development of some autism symptoms," said .

The study was published February 17th in the American Journal of Psychiatry. Its results are the latest from the ongoing Infant Brain Imaging Study (IBIS), which is led at CHOP by Dr. Paterson and Robert Schultz, PhD, who are co-authors on this study.

Participants in the study were 92 infants considered to be at high risk for ASD, because they all have older siblings with autism. Each infant had diffusion tensor imaging (DTI) -- a type of magnetic resonance imaging (MRI) -- at 6 months and behavioral assessments at 24 months. Most of the children also had additional brain imaging scans at either or both 12 and 24 months.

At 24 months, 28 infants (30 percent) met criteria for ASDs while 64 infants (70 percent) did not. The two groups differed in white matter fiber tract development -- pathways that connect brain regions -- as measured by fractional anisotropy (FA). FA measures white matter organization and development, based on the movement of water molecules through brain tissue.

This study examined 15 separate fiber tracts, and found significant differences in FA growth trajectories in 12 of the 15 tracts between infants who did develop autism versus infants who did not. Infants who later developed autism had elevated FA at six months but then experienced slower development over time. By 24 months of age, infants with autism had lower FA values than infants without autism.

The findings come on the heels of a recent study from London published in Current Biology, which found that infants at high risk for autism who were later diagnosed with the condition showed different brain responses from low-risk babies, or from high-risk babies that did not develop autism when shown images of faces looking at or away from the baby. Paterson said that the two findings strengthen one another and are encouraging evidence that scientists are on the right track towards finding markers for identifying autism much earlier than is currently possible.

In addition to funding from the NIH, the IBIS Network receives support from Autism Speaks and the Simons Foundation Autism Research Initiative.