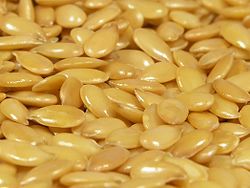 The obvious take home here is that a deficiency of omega 3 in one’s diet is a predisposition to mental instability.  We know we need to eat fish and other sources of omega 3 oils but this is not just about the perfect health giving diet but a factor in general brain function itself.

The fact that it may be good for you as a food is irrelevant.  It is way more important that mental stability is enhanced.

Thus we learn that a deficiency of this oil is capable of causing subtle ailments of the brain that are easily misdiagnosed.   Once again eat fish but be careful regarding the general oil quality itself. It goes rancid easily and should be consumed early.  Packaged goods may disappoint.

ScienceDaily (Feb. 8, 2012) — Researchers at Zucker Hillside Hospital's Recognition and Prevention (RAP) Program who have worked with teenagers at risk for serious mental illness for the past decade are now studying the effectiveness of Omega 3 fatty acids (fish oil) for treating psychiatric symptoms. This new study is a National Institute of Mental Health-funded randomized double-blind trial that was designed to test whether Omega-3 fatty acids improve clinical symptoms, and help adolescents and young adults (ages 12 to 25) who are at elevated risk for severe psychiatric disorders function better in school, work and other social environments.

"Of the 300 adolescents who have participated in the RAP Program, most have shown substantial improvement," noted Barbara Cornblatt, Ph.D., director of the Recognition and Prevention (RAP) Program and investigator at The Feinstein Institute for Medical Research. "If this study continues to show success, Omega 3 could offer a natural alternative to the range of medications and therapies now offered to RAP participants. Ultimately, the goal of the RAP Program is to intervene and prevent illness before symptoms get worse."

Omega 3 fatty acids are critical for normal brain function and they have been increasingly studied as potential treatments for medical and psychiatric disorders. The RAP Program study will randomly assign participants to either Omega 3 supplementation or to a placebo, and will compare the groups on key measures of symptoms and functioning after six months. Participants in both groups will be monitored closely on a monthly basis and compensation will be provided. All supplements are offered free of charge.