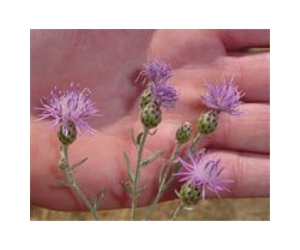 It has turned out to be difficult to counter an unwelcome transplant from a foreign ecosystem.   Finding the pest assemblage that controls the transplant is easy enough, the problem is that the cure far too often is as bas or worse than the original problem.  One needs only consider the disaster wrought of island ecologies by first rats and then their imported consumers who inevitably consume everything else first.

Otherwise it is nice to know that we won one.

The huge global extinctions of the past two centuries has been mostly about the overwhelming of island ecosystems hugely ancient that were abruptly and unintentionally displaced by our own hangers on.  The process of course continues, although initial efforts at restoration are underway and will surely become a major program everywhere as this century unfolds.

Recall that we are gaining the capacity to recreate lifeforms with recovered DNA and after we get a mammoth or two, the real effort will be to restore ancient animal populations wherever feasible.

Following extensive testing of European insects to find those that would feast on the knapweed but leave everything else alone, a beetle was introduced to that has caused a significant and rapid decline in knapweed.

The problem of invasive species may seem remote from most people's lives. But in some parts of the , an invasive plant creates a problem that hits home, literally.

That's because the presence of invasive knotweed on a property prevents potential buyers from obtaining a mortgage. This destructive plant from Asia, which can tear down walls and rip up roads, is also putting down roots in many parts of .

Research by Judith Myers, an ecology professor emerita at the , shows that the tide can be turned. At last week's meeting of the American Association for the Advancement of Science (AAAS) in , Myers talked about how her research has helped reduce the threat of a similar plant-knapweed.

The rangeland plant had spread through the interior of , ruining pastureland for cattle and impacting local economies.

Following extensive testing of European insects to find those that would feast on the knapweed but leave everything else alone, a beetle was introduced to that has caused a significant and rapid decline in knapweed.

For every one dollar spent on the control program, there was $17 in economic benefit in . Considering that a 2008 estimate put the annual cost of invasive weeds at $65 million in alone, the success of the program is a win for the economy and for the ecology.
Related Links

Natural Sciences and Engineering Research Council
Farming Today - Suppliers and Technology
Posted by arclein at 12:01 AM