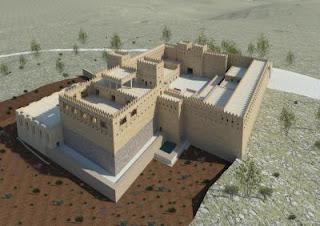 This is a reminder that humanity has always been keen to take his favorite plants home with him and to establish their horticulture close at hand.  Sometimes it did not work, but those were the exceptions.  It also reminds us that private gardens have always been popular and go far to make a space livable.

The one thing often forgotten is that a large dense tree providing shade will actually drop the temperature of the air underneath by several degrees while blocking the direct effect of the sun itself.  Thus a refuge is provided when the sun’s heat has driven one out of the house itself.

In the end, the pollen confirms just what one would expect and nothing else.  At least it is not an open question.

This is an artist's rendering of Ramat Rahel site. Credit: American Friends of

Researchers have long been fascinated by the secrets of Ramat Rahel, located on a hilltop above modern-day . The site of the only known palace dating back to the , digs have also revealed a luxurious ancient garden. Since excavators discovered the garden with its advanced irrigation system, they could only imagine what the original garden might have looked like in full bloom — until now.

Using a unique technique for separating fossilized pollen from the layers of plaster found in the garden's waterways, researchers fromTel Aviv University's Sonia and Marco Nadler Institute of Archaeology have now been able to identify what grew in the ancient royal gardens of Ramat Rahel. And based on the garden's archaeological clues, they have been able to reconstruct the lay-out of the garden.

According to Prof. Oded Lipschits, Dr. Yuval Gadot, and Dr. Dafna Langgut, the garden featured the expected local vegetation such as common fig and grapevine, but also included a bevy of exotic plants such as citronand Persian walnut trees. The citron, which apparently emigrated from via ,made its first appearance in the modern-day in Ramat Rahel's royal garden.

One of the unique features of Ramat Rahel's garden is its advanced irrigation system. The scope of the garden is even more impressive, says Dr. Gadot, because there was no permanent water source at the site. Rainwater was efficiently collected and distributed throughout the garden with aesthetic water installations that included pools, underground channels, tunnels, and gutters.

These installations finally allowed researchers to uncover what they had been searching for. Early attempts to remove pollen grains from the site's soil in order to reconstruct the botanical components of the garden were unfruitful because the pollen had oxidized. But after noticing that the channels and pools themselves were coated with plaster, probably due to renovation, the researchers theorized that if the plaster had ever been renewed while the garden was in bloom, pollen could have stuck to the wet plaster, acting as a "trap," and dried within it. Luckily, this hunch proved to be correct.

While some plaster layers included only typicalnative vegetation, one of the layers, dated to the Persian period (the 5th-4th centuries B.C.E.), also included local fruit trees, ornamentals, and imported trees from far-off lands."This is a very unique pollen assemblage," explains Dr. Langgut, a pollen expert. Among the unusual vegetation are willow and poplar, which required irrigation in order to grow in the garden; ornamentals such as myrtle and water lilies; native fruit trees including the grape vine, the common fig, and the olive; and imported citron, Persian walnut, cedar of Lebanon, and birch trees. Researchers theorize that these exotics were imported by the ruling Persian authorities from remote parts of the empire to flaunt the power of their imperial administration.

This is the first time that the exact botanical elements have been reconstructed in an ancient royal garden, say the researchers. The botanical and archaeological information they have collected will help them to re-create the garden so that visitors can soon experience the floral opulence of Ramat Rahel.

The origins of tradition

In their migrations, human beings distributed different plants and animals throughout the world, mostly for economic purposes, says Dr. Gadot. In contrast, at Ramat Rahel, royalty designed the garden with the intent of impressing visitors with wealth and worldliness.

Certainly, the decision to import various trees has had a lasting impact on the region and on Judaism as well, says Prof. Lipschits. The citron tree, for example, which made its first appearance in in this garden, has worked its way into Jewish tradition. The citron, or etrog, is one of the four species of plants used at Sukkot, and the earliest appearance of these species was at the garden of .