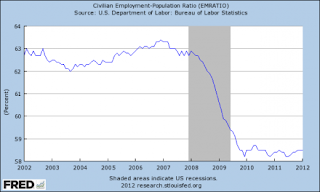 The good news is that it has not gotten worse in the economy for the past two years during which the whole cast of governments continued to do anything that might be construed as helpful to promoting a freshening of growth.

The seriously bad news is that it has not gotten better for two years.

A new regime doing the right things will still need an additional eighteen months to see a positive impact on the economy.  For that reason we can all add.   Nothing is really going to change much for two and a half years at least as we live our version of ’s decade long work out.

That is all assuming that nothing goes wrong.  You can quit laughing now.

I Can’t Take It Anymore! When Will The Government Quit Putting Out Fraudulent Employment Statistics?

On Friday, the entire financial world celebrated when it was announced that the unemployment rate in the had fallen to 8.3 percent. That is the lowest it has been since February 2009, and it came as an unexpected surprise for financial markets that are hungry for some good news.  According to the Bureau of Labor Statistics, nonfarm payrolls jumped by 243,000 during the month of January.  You can read the full employment report right here.  Based on this news, pundits all over the world were declaring that the economy is back.  Stocks continued to rise on Friday and the Dow is hovering near a 4 year high.  So does this mean that our economic problems are over?

Of course not.  A closer look at the numbers reveals just how fraudulent these employment statistics really are.  Between December 2011 and January 2012, the number of Americans "not in the labor force" increased by a whopping 1.2 million.

That was the largest increase ever in that category for a single month.  That is how the federal government is getting the unemployment rate to go down.  The government is simply pretending that huge numbers of unemployed Americans don't want to be part of the labor force anymore.  As you will see below, the employment situation in is not improving.  Yet everyone in the mainstream media is dancing around as if the economic crisis has been cancelled.  I can't take it anymore!  It is beyond ridiculous that so many intelligent people continue to buy in to such fraudulent numbers.

As you can see from the chart posted below, the labor force participation rate rose steadily between 1970 and 2000.  That happened because large numbers of women were entering the labor force for the first time.

The labor force participation rate peaked at a little more then 67 percent in the late 90s.  Between 2000 and the start of the recent recession, it declined slightly to about 66 percent.

Since then, it has been dropping like a rock.  The chart below does not even include the latest data.  In January, the labor force participation rate was only 63.7 percent.  That is the lowest that is has been since May 1983.  So keep that in mind as you view the chart.

In reality, the percentage of men and women in the that would like to have jobs is almost certainly about the same as it was back in 2007 or 2008.  There has been no major social change that would cause large numbers of men or women to want to give up their careers.  So there is something very, very fishy with this chart.... 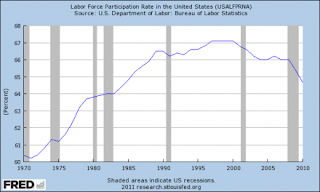 The federal government has been pretending that millions of unemployed Americans have decided that they simply do not want jobs anymore.

This does not make sense at all.

The truth is that unemployment is not really declining at all.  The percentage of Americans that are working is not increasing.  The civilian employment-population ratio dropped like a rock during 2008 and 2009 and it has held very steady since that time.

In January, the civilian employment-population ratio once again held steady at 58.5 percent.  This is about where it has been for most of the last two years....

Does that chart look like an "economic recovery" to you?

If the percentage of people that are employed is about the same as it was two years ago, does that represent an improvement?

If the employment situation in was getting better, the civilian employment-population ratio would be bouncing back.

We should be thankful that our economy is not free falling like it was during 2008 and 2009, but we also need to understand why things have stabilized.

The federal government is spending money like there is no tomorrow.  During 2011, the Obama administration stole an average of about 150 million dollars an hour from our children and our grandchildren and pumped it into the economy.  Even though the Obama administration spent that money on a lot of frivolous things, it still got into the pockets of average Americans who in turn went out and spent it on food, gas, clothes and other things.

Without all of this reckless government spending, we would not be able to continue to live way above our means and our economic problems would be a lot worse.

But even with the federal government borrowing and spending unprecedented amount of money, and even with interest rates at record lows, our economy is still deeply struggling.  Just consider the following facts....

So let's not get too excited about the economy.

Yes, things have somewhat stabilized.  The percentage of Americans that have jobs is about the same as it was two years ago.  Considering how rapidly jobs are being shipped out of the United States, that is a good thing.

Enjoy this false bubble of hope while you can.  Things are about to get a lot worse.

Do you remember how rapidly things fell apart after the financial crisis of 2008?

Well, another major financial crisis is on the way.  This time it is going to be centered in Europe initially, but it is going to spread all around the globe just like the last one did.
As the charts above show, we have never even come close to recovering from the last recession, and another one is on the way.

So how bad are things going to get after the next wave of the financial crisis hits us?

That is something that we should all be thinking about.
Posted by arclein at 12:01 AM