Did Early Humans Ride the Waves to Australia? 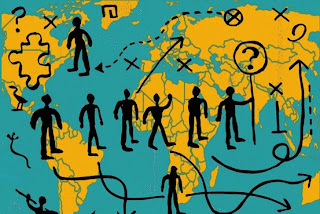 The actual migrations that populated took place some 60,000 years ago or more properly from 60,000 to 40,000 years ago.  This was a slow penetration and surely ran into predecessors who already were there not nearly so successfully.

They were using stone tools and we well know that this is sufficient to provide effective sea going canoes.  Does anyone ever remember the castaway tale of Robinson Crusoe telling of the arrival of canoe borne cannibals from a distant mainland barely glimpsed on a ?

I suspect the combination of seamanship and some other factor is necessary to understand the expansion of humanity.  A better explanation may have been the adoption of a coastal lifeway which naturally channels natural expansion along a coastal littoral.

Coastal villages could grow into larger communities than might ever be attempted inland where a nomadic lifeway would prevail.  Our problem is that the entire archeology is well underwater.

The most important take home is that the expansion represented a population expansion centered on large villages living off the sea into a world were all others relied on small band hunting and gathering.  These small bands included a range of earlier human groups that had simply walked and naturally expanded into hunting grounds as did the Neanderthals.

Did Early Humans Ride the Waves to ?

The 'beachcomber express' may have carried our African ancestors to the and beyond.

Everybody is African in origin. Barring a smattering of genes from Neanderthals and other archaic Asian forms, all our ancestors lived in the continent of until 150,000 years ago. Some time after that, say the genes, one group of Africans somehow became so good at exploiting their environment that they (we!) expanded across all of Africa and began to spill out of the continent into Asia and Europe, invading new ecological niches and driving their competitors extinct.

There is plenty of dispute about what gave these people such an advantage—language, some other form of mental ingenuity, or the collective knowledge that comes from exchange and specialization—but there is also disagreement about when the exodus began. For a long time, scientists had assumed a gradual expansion of African people through Sinai into both Europe and . Then, bizarrely, it became clear from both genetics and archaeology that Europe was peopled later (after 40,000 years ago) than (before 50,000 years ago).

Meanwhile, the geneticists were beginning to insist that many Africans and all non-Africans shared closely related DNA sequences that originated only after about 70,000-60,000 years ago in . So a new idea was born, sometimes called the "beachcomber express," in which the first ex-Africans were seashore dwellers who spread rapidly around the coast of the Indian Ocean, showing an unexpected skill at seafaring to reach across a strait that was at least 40 miles wide. The fact that the long-isolated Andaman islanders have genes that diverged from other Asians about 60,000 years ago fits this notion of sudden seaside peopling.

Sea levels were 150 feet lower then, because the cold had locked up so much moisture in northern ice-caps, so not only were most Indonesian islands linked by land, but the Persian Gulf was dry and, crucially, the southern end of the was a narrow strait. Recent work by Prof. Geoffrey Bailey and colleagues from in has shown that the gap was often less than 2½ miles wide for up to 60 miles. People would not have needed to move through Sinai and the inhospitable Arabian desert to reach the shoreline. They could raft or swim across a narrow marine canal.

The story grew more complicated last year when a team led by Hans Peter Uerpmann of the University of Tübingen in Germany described a set of stone tools found under a rock overhang in eastern Arabia, dating from 125,000 years ago. The tools were comparable to those made by east Africans around the same time. This was when Arabia was wetter than today, but the crossing was wider.

So maybe was colonized early and there was a long pause before the Beachcomber Express set off for southeast Asia? If so, the genetics of Arabians should show convergence on an ancient ancestor of more than 125,000 years ago. They don't: Recent research suggests a common ancestor only 60,000 years ago.

Two ways out of the impasse come to mind. One is that the Arabian settlers of 125,000 years ago died out and were replaced by a new exodus from . The second is that there may have been back-migration into to muddy the genetic water. Complicating the issue is the volcanic eruption of Toba, in Sumatra, around 74,000 years ago, which injected so much sulfurous dust into the high atmosphere that it caused prolonged droughts that might have come close to wiping out many human populations.

Prof. Bailey reckons the answer to these riddles lies beneath the waters of the Red Sea, where ancient coastlines, teeming with undisturbed archaeology, remain to be explored.
Posted by arclein at 12:01 AM