The Coming Drone War on the Mullahs 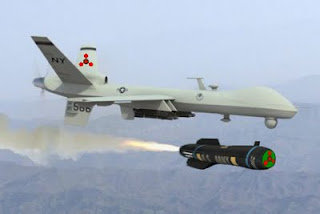 All you need to know about Islam is here.  It is that a group of clerics can sit in a room and sign off on outright executions. No more and no less.

At their worst, during the height of the inquisition, Christian clerics could only excommunicate a heretic and then turn him out into the hands of a bloodthirsty civil authority.

What bothers me the most however is that they were foiled in an attempt to not just kill a target in the , but that the intended death toll was meant to include a lot of Americans.  The failure of that enterprise suggests to me that another group is even now attempting to do the same.

I also think that an Iranian collapse is far closer than it appears on the surface.  In fact I do not understand how it even functions today.

I suspect that we are about to see a major escalation of combat activities against and it will take a surprising form.  We have already seen bombing events applied against the regime without a peep from the Iranian people.  The mullahs do not dare call out a mob to shout against this activity.

I do think that the drone war over has mostly run its course.  This means that the majority of the drone fleet can be redirected to target .  It will come as a natural escalation of pressure against nuclear technology, but that can act as a cover for the hunting down of other targets of opportunity.  There are also ample intelligence assets on the ground presently to assist the process.

While the world worries about the using blunt force, I would suggest that the mullahs will soon be hiding in bunkers and unable to exercise control.  Just how well can a squad of riot police stand up against a hellfire missile?  After4 one such squad is blown away, how do you convince the next squad to step up?

Even better, this can all be done in order to protect rioting civilians out hunting for the great leader.

The Mullahs’ History of Assassination

The deaths of the Iranian defence scientists have allowed the regime in to weep copious tears and sputter outrage about the inequity of assassination as a political tool.

One might think the more natural reaction there might be envy.  Assassination has been one of the outreach tools of the ayatollahs and their regime in since the early days of the Revolution. When the Islamic was established in 1979, it had two strategies to eliminate its opponents.  At home, it killed its internal opponents – killing 7,900 of them in its first five years alone using techniques many totalitarian regimes have employed, such as, mass executions, tortures, disappearances, and “accidents”. Abroad, it used its embassies and cultural offices to host killers and sent them out after prominent critics.  Many of these critics living overseas were Iranian intellectuals and activists who had escaped from after the establishment of the regime.  In addition to employing terror against its own citizens and émigrés, the Iranian government has also claimed victims from other nationalities.  The Islamic is one of the world’s most significant sponsors of terrorism.  During its 33 years of existence, it has continually instigated violence elsewhere and pursued indirect war through the use of terrorism throughout the Middle East, Africa, and both North and South America.

Although the Islamic of officials claim that terrorism is strange to them, an immense weight of evidence shows that orchestrated terrorism outside is a major factor in practice of the regime.  The first victims of the Iranian government terrorism were Shahriar Shafigh, the Shah of Iran’s nephew who was assassinated in 1979 in Paris and Ali Akbar Tabatabai, the former press attaché of the Iranian embassy in the United States under the Shah of Iran who was assassinated in 1980 in Washington.  The assassination of Ali Akbar Tabatabai was committed by David Belfield or Dawud Salahuddin, an African-American who converted to Islam and after the assassination fled to Iran.  In 2001, Dawud Salahuddin acted as the major character of the movie , directed by one of the Iranian regime’s filmmakers Mohsen Makhmalbaf.  After the first assassinations, many other Iranian dissidents were killed in different parts of the world.

Among the dead are, Dr. Shahpour Bakhtiar (the last Prime Minister of the Shah of Iran), Dr. Abdol Rahman Ghassemlou (the Leader of the Kurdistan Democratic Party of Iran), General Gholam Ali Oveisi (Tehran military governor), Fereydoun Farrokhzad (the famous Iranian showman, singer, and poet), and many other.  One of the more notorious attacks by the agents of the Iranian government against its dissidents occurred in Mykonos restaurant in Berlin, Germany in 1992 that caused the murder of Sadegh Sharafkandi (the Secretary General of the Kurdistan Democratic Party of Iran) and his representatives and translator, Fattah Abdoli, Homayoun Ardalan, and Nouri Dehkordi.  In April 10, 1997, the court announced that this assassination was plotted by Ali Khamenei ( Supreme Leader), Akbar Hashemi Rafsanjani ( former President), and Ali Fallahian ( former Minister of Intelligence).  Two of the terrorists were Kazem Darabi, an Iranian who lived in and Abbas Rhayel, a Lebanese terrorist and a member of the Hezballah organization.  Other Iranian and Lebanese terrorists were able to escape to and .

One of the most significant examples of the terrorist activities of the Iranian government against non-Iranians was the truck bombing of the Argentine Israelite Mutual Association in on July 18, 1994.  The Iranian government directed this terrorist activity through the terrorist group Hezballah.  This was one of the deadliest bombings to have ever occurred in , killing 85 people and injuring 300.  A major motive behind this atrocity seems to have been the suspension of a nuclear technology transfer agreement between and .  According to Argentine judge Rodolfo Canicoba Corral, the terrorists who were involved in this act were six Iranians (including Ahmad Reza Asghari, the third Secretary of the Islamic Republic of Iran Embassy in Buenos Aires, who used to work for Iran’s Revolutionary Guard before being posted to Argentina) and one Lebanese man.  Evidence suggests that the terrorist attack was planned in 1993, when Ahmad Reza Asghari attended a meeting with the former President of the Islamic , Akbar Hashemi Rafsanjani and his deputies.

In addition, the Iranian government has attempted to assassinate other political figures and intellectuals.  One of the significant examples was the former Supreme Leader of , Khomeini’s order (Fatwa) to kill Salman Rushdie, the writer of the Satanic Verses on February 14, 1989.  Another example is the recent assassination plot of the Saudi Arabian ambassador in the .  The officials have explicitly announced that the agents of the Iranian government especially, some of the commanders of the Iranian Revolutionary Guard Corps (Qods Force, a component of the Corps which the describes as a terrorist organization) were behind this plot.  The plan was to messily assassinate the Saudi Arabian ambassador in a restaurant in .  In the hope this would result in the death of enormous number of American citizens.  Recently, the Iranian government attempted to assassinate the Israeli ambassador and some Jewish teachers in .  has friendly relations with and about 9000 Jewish people live there.

Iran, has promoted terrorist groups like the Taliban, Hezballah, al Sadr’s militia goons in Iraq, Hamas, insurgents in Yemen, and has been substantially linked to al Qaeda.  However, since doing their level best to further destabilize and since 2003, has found that unknown parties have been passing high quality arms and training to unsettled elements among its many angry minorities.  Between its application of harsh Sharia law, and its reactions to restless minorities and internal criticism, the internal human rights record of is appalling.  However, after 33 years, the regime is shaky. The aging revolutionaries have lost the loyalty of the people, failed in their hopes for reorganizing the region, and are finding that their governing coalition is growing corrupt, even more inefficient, and is fragmenting.  Like many failing dictatorships, they hope to refocus attention on other projects and pursue the development of nuclear weapons and promoting ever more desperate adventures abroad, relying on increasingly unreliable allies like the Assad government in .

Finally, for 33 years, the Islamic has used terror to subdue its own citizens, intimidate the Iranians, and as a tool of statecraft against the people of many other nations.  Now, they complain about the assassination of their nuclear scientists before they complete the ultimate terror weapon, and about attacks on the Revolutionary Guard Corps, the instrument of their own internal terror.  now portrays itself as a victim of terror and seeks sympathy from other nations.  For a display of sheer cynicism, it is hard to beat the tears of the crocodile.

John Thompson is Executive Director of the Mackenzie Institute for the Study of Terrorism, Revolution and Propaganda-Canada.  Sara Akrami is Founder and President of the Human Rights Activists Association at York University-Canada.
Posted by arclein at 12:01 AM

It is very hard for a foreigner to see the difference between Iran and America. The USA kidnaps people all over the world and flies them illegally to other countries for torture. They kill their own citizens or remove their citizenship, they perform acts of terrorism in countries all over the globe and maintain the world's largest offensive weapons. This piece read like cheap propaganda from sone State Dept, a poor performance for a scientific blog.

I have been surfing on-line more than three hours today, but I never found any attention-grabbing article like yours. It's beautiful worth enough for me. In my view, if all website owners and bloggers made good content as you did, the net will probably be much more useful than ever before.
Yamaha OEM Piston Kit 2002-2009 YZ85 YZ 85 NEW