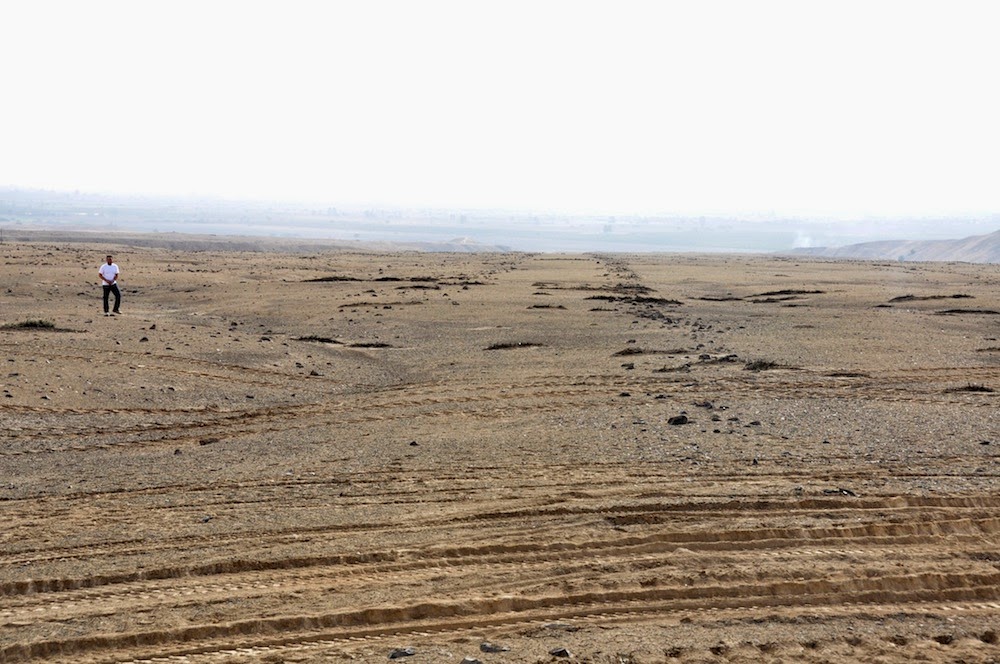 The fact that we have a second incidence of these geo lines takes a lot of the mystery out of the process.  Community complexes needed communal gathering areas for annual events, much as we do today.  Thus a flat high desert or even a local stretch of waste land is a natural locale.   They are likely at most a day’s walk from home for participants.

With that yearly incentive, it becomes a clan to dress up their own campsite and to  help establish boundaries in conjunction with others.  As well, if ritual processions are happening, then the road bed will be bounded as well.

All this captures the spirit of the Nazca lines and until compelling arguments arise is enough explanation.

I note that the lines here appear to be formed by smoothing out a procession way and that they appear to be disordered and merely removed by tossing.

The lines were created by people of the Paracas, a civilization that arose around 800 B.C. in what is now Peru. The Paracas culture predated the Nazca culture, which came onto the scene around 100 B.C. The Nazca people are famous for their fantastic geoglyphs, or rock lines, built in the shapes of monkeys, birds and other animals.

The new lines date to around 300 B.C., making them at least 300 years older than the oldest Nazca lines, said Charles Stanish, the director of the Cotsen Institute of Archaeology at the University of California, Los Angeles, who reported the new find today (May 5) in the journal Proceedings of the National Academy of Sciences.

"They used the lines in a different way than the Nazca," Stanish told Live Science. "They basically created these areas of highly ritualized processions and activities that were not settled permanently."

The closest European analog, Stanish said, would be the medieval fairs that brought visitors from far and wide.

Ancient fairs
Stanish and his team discovered the lines in the Chinca Valley, which is about 125 miles (200 kilometers) south of Lima, Peru. The area has a history of pre-European-contact settlements stretching from at least 800 B.C. to the 1500s A.D.

Archaeological surveys revealed large, ancient mounds in the valley. Over three field seasons, Stanish and his colleagues mapped these mounds, as well as nearby rock lines associated with each mound. They found 71 geoglyph lines or segments, 353 rock cairns, rocks forming circles or rectangles, and one point at which a series of lines converged in a circle of rays. The researchers also excavated one cluster of man-made mounds.

The excavations and mapping revealed a carefully built environment. Some long lines marked the spot where the sun would have set during the June solstice (the winter solstice in the Southern Hemisphere). Two U-shaped mounds also pointed toward the June solstice sunset, and the largest platform mound on the site lined up with the solstice as well. These lines and mounds probably served as a way to mark time during festivals, Stanish said.

Some lines are set out to frame pyramid structures, Stanish said. The lines are parallel, but because parallel lines seem to converge with distance, these framing lines appear to point directly at pyramids. Other lines run parallel to roads that are still used today, Stanish said.

"I don't think people needed the signposts, but it was more kind of a ritualized thing, where you come down and everything's prepared," he said.

Andean trade
The desert lines and mounds are about 9 miles (15 km) from settlements near the coast. Stanish and his colleagues suspect that the ancient "fairgrounds" were built on land that was useless for farming and were intended to attract tradespeople and buyers from the coast and the Andes highlands.

The mounds, pyramids and lines were likely the ancient version of neon signs, Stanish explained: "We're expending time and effort and resources to make our place bigger and better," he said, explaining the mindset of those who created the constructions. The various settlements on the coast probably competed to attract the most participants to their own fairs.

To confirm this notion, the researchers plan to excavate pyramids near the coast, looking for artifacts that would link settlements to the desert lines and mounds.

The discovery of these older rock lines emphasizes the geoglyphs had more than one function, Stanish said. People have long looked for "the" reason for the Nazca lines, but it's more accurate to think of the lines like multi-purpose technology, he said.

In that way, Stanish said, the lines are like pottery: one invention used for multiple purposes.

"Native Americans in this part of the world were extremely ingenious," he said.