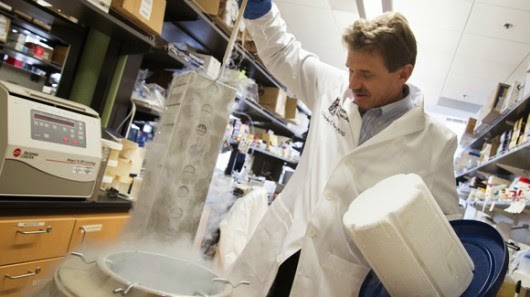 Unbelievably they have actually done it.  They have been able to restore failed heart tissue with new tissue in a substantial manner.  This was one of the original dreams when stem cells were first recognized three decades ago.  Now we are seeing real delivery.

The next decade will see the full advent of therapeutic tissue replacement become standard.  It will also see teeth replacement and bone replacement as well.  That is not a lot of time.

As  usual it is understated, but real progress has been far swifter than expected and time frames appear to represent the maximum needed these days.

In what could mark a significant breakthrough in the treatment of heart disease, researchers at the University of Washington (UW) have successfully repaired damaged tissue in monkey hearts using cells created from human embryonic stem cells. The findings demonstrate an ability to produce these cells on an unprecedented scale and hold great potential for restoring functionally of damaged human hearts.

The researchers were exploring ways of restoring human hearts damaged by myocardial infarctions, a common type of heart attack that blocks major arteries and prevents oxygen from reaching the heart muscle. This lack of oxygen in turn causes damage to the muscle tissue and impacts the ability of the heart to pump blood. The researchers are aiming to restore these hearts to full functionality using cells grown from human embryonic stem cells.

"Before this study, it was not known if it is possible to produce sufficient numbers of these cells and successfully use them to remuscularize damaged hearts in a large animal whose heart size and physiology is similar to that of the human heart," says Dr. Charles Murry, professor of pathology, bioengineering and medicine at UW and leader of the research team.

Over the following weeks, the injected cells infiltrated the damaged tissue, maturing to form new muscle fibers and beat in synchrony with the heart. Three months after the injections, the cells appeared fully integrated with the original tissue.

"The results show we can now produce the number of cells needed for human therapy and get formation of new heart muscle on a scale that is relevant to improving the function of the human heart,” says Dr. Michael Laflamme, UW assistant professor of pathology.

The researchers say that the injected stem cells regenerated 40 percent of the damaged heart tissue, though some side effects were observed. In the first weeks after the injections, the team reported occurrences of irregular heartbeats, also known as arrhythmias. However, the problem subsided after two to three weeks once the cells had matured and become stable.

From here, the researchers will work to reduce the risk of arrhythmias and also to clearly demonstrate that the cells are capable of substantially improving the functionality of a damaged heart. They are hopeful the approach will be ready for clinical trials in humans within four years.

The team's research was published in the journal Nature.

Nick was born outside of Melbourne, Australia, with a general curiosity that has drawn him to some distant (and very cold) places. Somewhere between enduring a winter in the Canadian Rockies and trekking through Chilean Patagonia, he graduated from university and pursued a career in journalism. He now writes for Gizmag, excited by tech and all forms of innovation, Melbourne's bizarre weather and curried egg sandwiches.