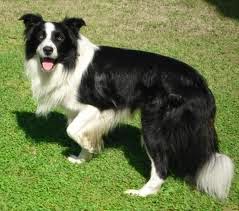 I grew up working with a border collie and have absolutely no doubt.   He ended up organizing the local dog pack and then proceeded to run down foxes in our locale.  This made for a confrontation one bright morning with an angry fox who seriously wanted to pick a fight one on one.

I would not contemplate working with animals without a border collie assisting.  I am now pretty sure that they do read our minds rather well.  That happens to be the best and simplest explanation for the behavior I observed.

Most dogs no longer have active working lives which is a shame.

Think your dog deserves to sit at the head of the class? If your pooch is one of these breeds, you're probably right!

We surveyed veterinary professionals to learn which dog breeds are the smartest, and the twelve listed below garnered the most votes. And anyone who has spent any time around these dogs is sure to agree. After all, we can't be the only ones who've been outsmarted by a Border Collie, can we?

1. Border Collie
The Border Collie is an intense, hardworking, highly energetic dog whose ability to impose his will upon sheep is legendary. In fact, he's so good, he just might impose his will on you, too. He has astounding focus, which is a real plus in the field, but if he's left without a job to do, that focus can be a problem.
Still doubt this dog's smarts? Check out Chaser , the Border Collie who learned a thousand words!

Don't judge the Poodle by his fancy fur and pretty face. This dog has beauty and brains, along with a serious sense of humor. Poodles are far from prissy; they're active dogs who thrive on learning and attention from those they love. Poodles are fabulous choices for agility and obedience competitions - but keep in mind that even though he's not a froufrou show dog, your Poodle will still need intense grooming.

The German Shepherd Dog is an adaptable, fearless dog who's a natural protector, making him a great fit for military and police work. However, even if you don't carry a badge, he's still a loyal, energetic companion. He loves spending time with his family, especially if that time is spent playing, running, hiking, working or doing something else that uses up some of that energy.

The Australian Shepherd is one devoted dog, and he's not afraid to show his love by leaning on your leg, sitting on your foot or finding a way into your lap (never mind the fact that he might weigh as much as 65 pounds). But he's not just a snuggle bug; he's a total braniac who excels in just about anything he puts his sharp mind to - obedience, agility, flying disc competitions, herding trials, you name it.

Good-looking, smart and fun-loving, the Labrador Retriever has a a lot going for him. The breed has been America's most popular breed for 23 consecutive years - any Lab lover will tell you that they can be the perfect family dog. A Labrador tends to become everyone's devoted best friend.

The gentle Golden Retriever is a people pleaser, to be sure, but this sweet face has a big brain behind it. Originally developed to hunt, today's Goldens are fiercely devoted family dogs who need plenty of exercise in order to keep destructive tendencies at bay. Like the other smarties on this list, he's a good choice for activities that utilize his mind and body, so go ahead and sign him up for that dock diving or fly dog competition. As long as you're willing to put in the work to teach him, he'll do the rest.

The Australian Cattle Dog, who hails from Oz, is also known as a Blue Heeler or Queensland Heeler. This is a smart and independent breed who can be a challenge to raise and live with. He has a reputation for being stubborn, but the corollary is that he never gives up when he puts his mind to something.

The Doberman Pinscher is among the smartest of all dog breeds, and one whose owners need to pay attention lest they find themselves outsmarted. If you expect your dog to spend his days in the backyard and his evenings keeping you company while you play video games, you'd better be prepared for a barking, bored, destructive dog instead of the devoted companion you thought you were bringing into your home.

Intelligent and easily trained, the Belgian Malinois exudes confidence and is an exceptional watch and guard dog. Active and energetic, he's terrific at search and rescue, agility, and pretty much anything else you can teach him.

The Jack Russell Terrier, also known in AKC circles as the Parson Russell Terrier, can be wildly intelligent and extremely active. He was bred for active work, and if left without a full-time job (like hunting rats or competing in earthdog trials and terrier races), well, he'll find something to do. Something like excavate your garden, since digging is one of his favorite pastimes.

The Sheltie is an active, fun-loving dog who's a little too big to be small but small enough to be cute. His gentle disposition, athleticism, and keen intelligence make him a dog who lives to please and loves to show off.

Since skyrocketing to fame with the popularity of Lassie, the Colliehas maintained his impressive standing as a devoted family dog. This affectionate canine is very intelligent and enjoys fun activities like learning tricks or competing in herding events.
Posted by arclein at 12:00 AM

Dogs that look deformed are often breeds that don’t have any more working lines and the show line breeders completely took over. Working lines in breeds are healthy and look similar to their ancestors. For example many show line German Shepherds are very different from working line and Czech German Shepherds that I think they should eventually be considered different breeds. If you want to preserve a breed and keep dogs looking like dogs, the working lines have to be preserved. Looking for large dog breeds for families Wondering what large dog breeds are good with kids or would be good for apartments Find out here A complete list of large dog breeds

Therefore glad I found your website searching for shoes.
This is great information at any given time when the internet is full
of falsehoods. Keep up the task in "Link to another good article from Allen Wright" and that i can
come back often. Looking for large dog breeds for families Wondering what large dog breeds are good with kids or would be good for apartments Find out here A complete list of large dog breeds