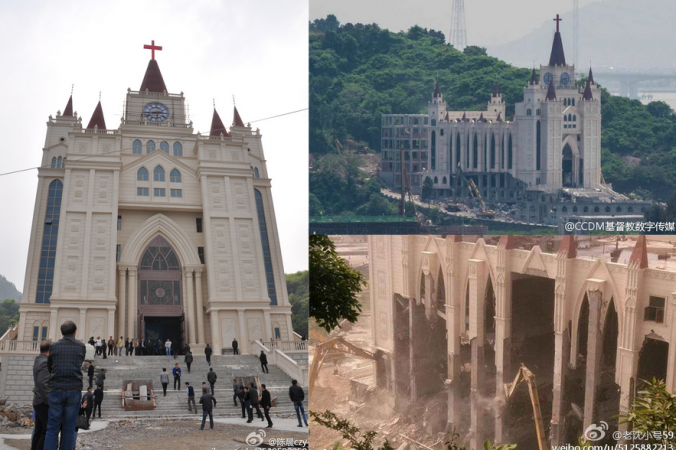 It never seems to end but it was to be expected.  If anything, Christianity has had more lenience than could reasonably be expected under the Chinese regime.  I suspect that the authorities are loathe to produce martyrs as they are well aware of the effect.   Just make things awfully difficult.

In the meantime, the Christian missionary octopus will continue to reach out and touch people throughout the population and this just validates them.

Christianity has long since proven that they have centuries that no one else has.  That alone must give the Chinese pause as their present dynasty is slipping into late life.

One of the most memorable scenes in Lewis Carroll’s classic “Alice in Wonderland” is the Queen of Hearts shrieking “Off with their heads!” whenever she is displeased.

Xia Baolong, the Communist Party secretary of Zhejiang Province, seems to have taken a leaf from the Queen’s playbook, when he conducted an inspection tour of the province earlier this year. Pointing at a cross on a church in the small town of Baiquan, he is reported to have announced that it was “too conspicuous and splashy.” It was therefore to be “rectified,” he said. The cross was ripped down and a smaller one placed on the wall.

Xia’s peremptory remarks, which continued during the inspection tour, seem to have cascaded into a wave of church demolitions across the province recently, under vague provisions of economic development and urban renewal.

On April 28, the target was the state-approved Sanjiang Church in Wenzhou City. Wrecking crews moved in on that church, ripping down its facade even as congregants attempted to stop them through protests. The Telegraph reported a witness saying: “I saw three or four excavators out front, demolishing the church, and three or four out back, demolishing the annex building. I also saw a small excavator going inside the church doing demolition work inside.”

A photograph, unverified, later appeared online appearing to show that the whole structure had collapsed.

The assault on the Sanjiang Church is just one part of a campaign that crosses Zhejiang Province and beyond.

In Hongzhou of Zhejiang, 200 people from the local government came and removed a cross from a small church. “They said the cross is too conspicuous, and it should be moved inside the church building and should shrink in size,” said Pastor Sheng of the Three-Self Patriotic Movement church, which is affiliated with the Chinese state. An official told him the removal was a “rectification.”

Officials in Yongjia County demanded that the congregation get rid of the cross, and also the entire top floor of the church. Reports from Anhui Province indicated that the purge of churches and crosses was moving forward in other provinces too.

The buildings in Zhejiang Province may be but the first casualties in an all-out war against churches, and perhaps ultimately, all religious buildings in China, under the provisions of urban renewal and economic development campaigns.

Wenzhou’s Christian population, about 15 percent of Wenzhou’s 9 million citizens, has brought it the nickname “China’s Jerusalem,” a potentially concerning term for the militantly atheist Communist Party.

The popularity of religious groups has long been a cause of anxiety to the Party, which launched concerted campaigns against Buddhism and Taoism in the early years of establishing its rule. Decades later the popularity of qigong practices, and in particular Falun Gong, led to another wave of persecution.

Pew Research Center’s Forum on Religion and Public Life projects that China will have around 160 million adherents by 2025.

These developments are apparently of great concern to Party Secretary Xia Baolong, who complained about the infiltration of “Western hostile forces” (the Christian churches) trying to drive a wedge between Party cadres, in an interview with Xinhua, the state mouthpiece, on Feb. 17.

In July last year he addressed the Wenzhou Municipal Party Committee and warned ominously of underground religious influence, according to a Party document.

Hidden in the momentum of modernization, beautification, and economic development the Chinese Communist Party sees the opportunity to flatten the churches, cut down the forest of crosses in Wenzhou’s skyline, and thwart the spread of Christianity in China.

Official Party statements also indicate that the strategy for the demolition of religious structures is related to attempts to develop the land they stand on. The plan is discussed by State Bureau of Religious Affairs Secretary Wang Zuoan, in a statement broadcast by Phoenix Television at the end of 2013, though few details are given.

Secretary Wang admonished local officials to be mindful of the traditions and feelings of the religious peoples as they went about destroying religious buildings, but did not disguise the intent of the Party plan, which also provides for tighter regulation of religious bodies and property as well as an overhaul of the legal status of religious property holdings.

The provincial attack on churches was launched soon after Wang advocated religious property confiscation, under the leadership of Zhejiang Party Secretary Xia Baolong.

The removal of crosses and destruction of churches are authorized under Zhejiang’s “Three Rectifications and One Demolition” development campaign, which frequently references structures designated as “illegal,” a broad and flexible designation used by officials in China.

The launch of the “Three Rectifications and One Demolition” programs set into motion provincewide programs. Hanzhou set a three-year goal of taking down 3 million square meters of illegal buildings, which would include religious structures. Intensification of propaganda to guide public opinion about the removal of these illegal buildings, to maintain “a harmonious atmosphere,” is included in the plan.

The local government of Jinhua, a city of Zhejiang, bragged that during one week in March, 549,875.37 square meters of illegal buildings were removed, and that they would implement a “war map” to track progress in the destruction of targeted buildings and neighborhoods.

But it is documents obtained by ChinaAid from Ruian City and Shamen Town, in Zhejiang’s coastal Yuhuan County, that most openly divulge the plans for religious structures.

Internal communications between offices in Ruian City reference tables of statistics for illegal structures, including house churches, which are covered under the “Three Rectifications and One Demolition” campaign. The internal document states, “You should regard the illegal structures listed as ‘slated for destruction’ under the provincial system for ethnic and religious affairs. They are key targets in your investigation and screening.”