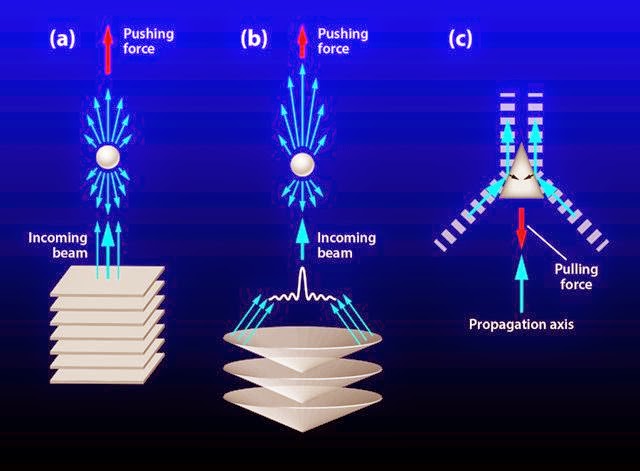 This folks is a simple proof of concept that can now be extended to forms of wave production.  More specifically, it applies directly to applications using higher ordered cyclic functions that promise to seriously tame gravity as we know and presently understand it.

We already know from multiple UFO sightings that tractor beams are possible and certainly desirable.  Since a UFO also is using a gravity control device in the form of a large ring band it makes perfect sense that it may also be tapped to provide a tractor beam as well.  Thus a proof of concept is important confirmation of the apparent science.

And do not worry about space.  Gravity works just fine there.

This schematic shows how sound waves normally pushed an object away, in (a) and (b). But if they are aimed at an object as in (c), that is also appropriately shaped, the object can be pulled toward the acoustic source.

Tractor beams (short for "attractor beams," which can bring one object closer to another from a distance) are a common trope in science fiction. But could they be made in real life? Researchers made news earlier this year when they created a kind of tractor beam, or "optical tweezers," that can move around nano-sized objects with light. NASA scientists are also working on a project to reel in objects with light; Australian researcher have moved small objects a total of 5 feet with lasers. Most of this work has involved light, but now, a separate group has made an acoustic tractor beam that can move much larger objects with sound waves.

The device consists of about a thousand ultrasound emitters, placed underwater. When turned on, scientists used it to tug along centimeter-sized objects (roughly half and inch), such as a small hollow triangular shape. Normally the effect of sending acoustic beams at something would tend to push it away. But the scientists found that by precisely controlling the angle of sound waves, they can create a low pressure zone in front of the object, thus pulling it closer.

The technology has some limitations--it couldn't be used in space, since as you probably know sound cannot travel in a vacuum ("In space no one can hear you scream," as the Alien tagline goes.) But it could possibly be used for some biomedical applications, perhaps for manipulating objects beneath skin or within organs, without cutting. "You can imagine medical diagnostics much like the tomato-freshness test, squeezing cells to tell if they're cancerous or metastatic or normal," study co-author Gabriel Spalding, a physicist at Illinois Wesleyan University, told Popular Mechanics.

ABSTRACT
Negative radiation forces act opposite to the direction of propagation, or net momentum, of a beam but have previously been challenging to definitively demonstrate. We report an experimental acoustic tractor beam generated by an ultrasonic array operating on macroscopic targets (>1  cm) to demonstrate the negative radiation forces and to map out regimes over which they dominate, which we compare to simulations. The result and the geometrically simple configuration show that the effect is due to nonconservative forces, produced by redirection of a momentum flux from the angled sides of a target and not by conservative forces from a potential energy gradient. Use of a simple acoustic setup provides an easily understood illustration of the negative radiation pressure concept for tractor beams and demonstrates continuous attraction towards the source, against a net momentum flux in the system.