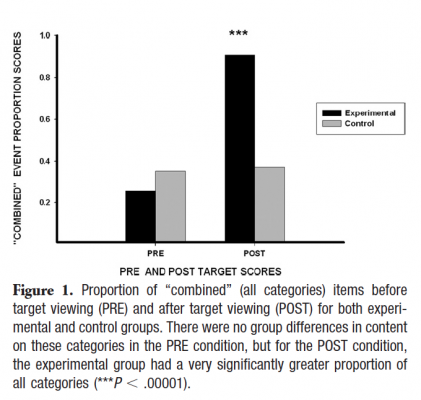 This is a bit of worthy work that as noted can be automated to hugely enlarge the sample size to plausibly produce meaningful resolution.  This is important because what we are naturally generating is fuzzy evidence in terms of reports that plausibly contain conforming data and structure.  I do this extensively with cryptozoology where at least twenty separate observations are generally enough to characterize the majority of conforming components.

We want much more with dreams because we are simply unable to clearly report.  They are fuzzy.

Yet important questions do need to be queried and real tests put together.  That will be very challenging but it appears to be a valid line of work.

There’s new signs of life for the study of dream telepathy.

These 2 new studies are a welcome addition to a field of inquiry that is often referred to the third rail of psychology. (That’s a choo-choo metaphor: touch it and you’ll die!)

Both of Smith’s experiments exposed students to a photo of an individual and asked them to try to dream about the problems of that person. So there are sender and receivers, as is traditional in dream telepathy studies. The identity of the senders were unknown, even to the experimenters themselves.

In Experiment 1, the focus was on health problems of the individual in the photo. The study compared 2 dreams that the students submitted before the “incubation” began with 2 dreams collected afterwards.

In Experiment 2, the focus was on life problems of the individual in the photograph. Like the first study, students submitted 2 dreams before they were informed about the aim of the study. Experiment 2 also used an additional control: about half of the students (56 people) looked at a photograph that was unbeknownst to them a computer simulated image–not a real person.

In both studies, the experimental post-incubation groups had many more “hits” than the controls, a hit being an image or concept in the dream that correlated to real problems of the individual in question.

More convincing for me, in experiment 2, the dream content of the control group (who looked at a fictional person’s image) did not change from before and after incubation, where as the experimental group had a large (statistically significant) change (see the graph below).

Carlyle Smith says this about the findings:

The data from these experiments suggests that normal undergraduates were able to have dreams with content that reflected the real-life problems and concerns of an unknown target individual. The content reported by each experimental individual varied somewhat and the focus varied from dreamer to dreamer, but overall, the scores on specified categories were quite significantly different for the target in experiment 2. Equally important was the lack of change in content for the Controls where the target was fictitious.

Here’s where to read the study yourself. There’s great details about the dream themes and how they related to the sender’s real-life problems.

Building on the Legacy of Maimonides

In many respects, these studies owe much to the legacy of earlier studies conducted by Stanley Krippner and Montague Ullman in the 1970s and 1980s at the Maimonides Medical Center in Brooklyn, New York. If you haven’t done so, pick up Dream Telepathy for an interesting read about their incredible years of experiments, comprising over 40 studies. Here's an image of Stan Krippner on the night shift at Maimonides Medical Center - you can see the polysomnograph printing out on the left, recording a dreamer’s brain waves.

Like the Maimonides studies, Smith carefully designed the experiments so the experimenters themselves did not have information about the “sender.” Smith’s studies also used the Hall Van de Castle system to quantity the reports, making statistical research on dream content possible.

One of Smith’s interesting innovations is the use of a “placebo” or control. However, unlike Maimonides, these student’s dreams were not lab verified by EEG, but rather relied on home reports.

Also, as far as I can tell, unlike some of the Maimonides studies, Smith’s studies did not use third-party or independent researchers to code the dream content. Because Smith’s method is so transparent, this could be easily done at a later point. (But, then again, that’s a big problem in this field of inquiry: getting other researchers to replicate the conditions of a study or even look at the data in the first place.)

The Future of Dream Telepathy is in Your Pocket

Neurologist Patrick McNamara brought these studies to my attention in in his recent blog post on Psychology Today. McNamara stands behind Smith’s integrity as a researcher, pointing out that he is one of the cognitive psychologists who first revealed sleep’s role in memory consolidation. In fact, in 2009, Smith won the Distinguished Scientist Award from the Canadian Sleep Society.

McNamara has this to say about the significance of Smith’s findings:

Whatever the mechanism, tests of the reality of dream telepathy should continue apace. Use of huge dream communities, like those at dreamboard.com and dreamscloud.com, should be enlisted. If hits continue to rise to above chance levels, as in Smith’s studies, imagine if one had 200,000 dreamers attempting to dream the details of a pictured individual’s problems?

Thousands to millions of dreamers might be enlisted to dream about possible practical solutions to the target’s problems.

I agree: smart phones are perfect data collectors because we carry them everywhere, and most us sleep next to them too. Home reports on a mass scale are going to blow the roof off of many aspects of dream research, including dream telepathy and other kinds of extraordinary dreaming. Apps, including ones McNamara didn’t mention such as SHADOW and Dream:On could take a role in setting up dream research, collecting reports, and even analyzing the data to some degree.

Take it a step further: I am really looking forward to the dream app that also functions as a home sleep lab (like sweet sweet Zeo used to do), providing timestamps on the dream reports by actigraphy, EEG, EOG, or a combination of these methods. Are you listening,Beddit?

By no means am I neutral about the potential of telepathic dreaming, as I’ve experienced some pretty anomalous encounters in my time. But is it really telepathy? Or is it clairvoyance? What about precognitive dreams too? Is the space-time continuum just messing with us? As Doctor Who puts it:

Who really knows at this point? I just I know that the weirdness is built right in. I just try my best to honor these seemingly psychic dreams when they show up.

I can only assume that scientific research will continue to reveal how these things work, even though it may take a more radical scientific culture for more researchers to try. Smith’s work is poised to reignite the debate.

Ryan Hurd is editor of Dream Studies Portal and author of several books on dreams and consciousness, including Dream Like a Boss (Book 1): Sleep better, dream more and wake up to what matters most.