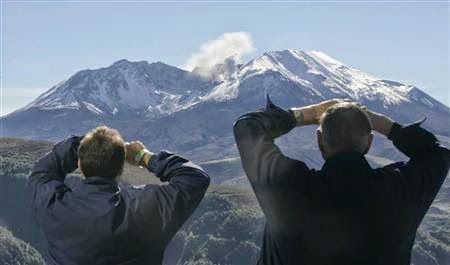 There does not appear to be anything to be concerned with, but what impresses me is the development of seismic mapping and ongoing dynamic modeling of an active volcano.  This is all very good news.  It means that we have scant excuse to ever again be blindsided as happened originally back in 1981 when no one understood that rapidly increasing potential energy had the be violently released and volcanos and atomic bombs are not noted for channeling their energies safely.

We still have folks who know much better taking excessive risks around volcanoes.  After all, if you find yourself in the middle of a debris field and the volcano is spitting, perhaps it is time to leave.  Dead researchers write few monographs.

At Mt St. Helens, fresh magma has entered the deep plumbing system and is repressurizing the molten mass since 2008.  This should emerge as a period of more vigorous cone building.  We are obviously going to get our original cone built back.

by Eric M. Johnson
SEATTLE (Reuters) - Magma levels are slowly rebuilding inside Mount St. Helens, a volcano in Washington state that erupted in 1980 and killed 57 people, although there was no sign of an impending eruption, U.S. scientists said.

The roughly 8,300-foot volcano erupted in an explosion of hot ash and gas on May 18, 1980, spewing debris over some 230 square miles and causing more than a billion dollars in property damage. Entire forests were crushed and river systems altered in the blast, which began with a 5.2 magnitude earthquake.
"The magma reservoir beneath Mount St. Helens has been slowly re-pressurizing since 2008," the U.S. Geological Survey said in a statement on Wednesday. "It is likely that re-pressurization is caused by (the) arrival of a small amount of additional magma 4 to 8 km (2.5 to 5 miles) beneath the surface."

The USGS said this is to be expected with an active volcano and does not indicate "the volcano is likely to erupt anytime soon."

The USGS, and the Pacific Northwest Seismic Network at University of Washington, closely monitor ground deformation and seismicity at the volcano. This summer, they will also measure its released gases and gravity field, measurements that can be used to monitor subsurface magma and forecast eruptions.

(Reporting by Eric M. Johnson in Seattle; Editing by Larry King and Sofina Mirza-Reid)
Posted by arclein at 12:00 AM