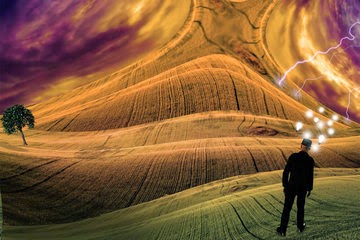 I am having a researcher test this out to get some informed feedback.  However this clearly conforms to my conjectures regarding ring stones in which we expect resonant sources to stimulate the physical mind sufficiently to allow access to at least the first luminous plane.  This has now been described as lucid dreaming and practice allows the individual to manage the experience.

It is also clearly invoked when spiritual realms are reached through meditation.  Thus it is extremely useful to be able to investigate on demand.

At least we now have clear confirmation that we are on the right track here.

Lucid dreams, in which people are aware of and can control their dreams, are rare. But now scientists have found they can induce this weird state of mind in people by zapping their brains with a specific frequency of electricity.

"I never thought this would work," said study researcher Dr. John Allan Hobson, a psychiatrist and longtime sleep researcher at Harvard University. "But it looks like it does."

The results showed that when the inexperienced dreamers were zapped with a current of 40 Hertz, 77 percent of the time these participants reported having what were described as lucid dreams.

"They were really excited," said study researcher Ursula Voss, of J.W. Goethe-University Frankfurt, who designed the experiments. "The dream reports were short, but long enough for them to report, 'Wow, all of the sudden I knew this was a dream, while I was dreaming.'"

Dream waves
A lucid dream can be thought of as an overlap between two states of consciousness — the one that exists in normal dreaming, and the one during wakefulness, which involves higher levels of awareness and control.

"If I'm aware, if I'm self-reflective, if I'm thinking about myself, about my past and future, that's normally a waking function," Voss said. In lucid dreaming, we transfer elements of waking consciousness into the dream, she said.

Such overlap is also reflected in the brain waves that researchers can detect using electroencephalography, or EEG. Normal dreaming has its own specific brain wave patterns. However, when people have lucid dreams, they show gamma waves, an activity pattern that is linked to consciousness but is nearly absent during sleep and normal dreaming. The gamma activity in the brain of lucid dreamers is especially seen in the brain's frontal cortex.

In the study, the researchers placed electrodes on the scalps of 27 participants, who were not lucid dreamers, to stimulate the frontal cortex, and recreate the gamma wave activity that has been seen in lucid dreamers.

Over four nights, they applied the 30-second bolts of electrical currents to the participants' scalps, two minutes after the participants had entered the dreaming stage of sleep, as shown by their brains' activity patterns. The frequency of stimulation varied from 2 Hz to 100 Hz, and sometimes the researchers didn't actually deliver any electrical currents. The participants were then immediately woken up to report their dreams to an interviewer who wasn't aware of which stimulation they had received.

The researchers also found that after stimulation, if people did experience a lucid dream, the gamma activity increased even more.

"We were surprised that it's possible to force the brain to take on a frequency from the outside, and for the brain to actually vibrate in that frequency and actually show an effect," Voss said.

Lucid dreams represent a unique opportunity for scientists to observe the brain change from one state of consciousness to another, and the new results suggest it may have become easier to study such changes.

"Instead of waiting for things to happen, you can actually now do experiments, deliver stimulus and see what happens. It gives you much more classical stimulus-response handle on consciousness itself. It's amazing," Hobson said.

Beyond advancing the understanding of what happens during lucid dreams, the new findings may add insight to the broader research on the nature of consciousness, and how it comes about.

"It lets us see that consciousness is clearly a brain function," Hobson said. "We knew that anyway, but the mechanisms are not clear, and this puts a new spin on it."

The study is detailed today (May 11) in the journal Natur