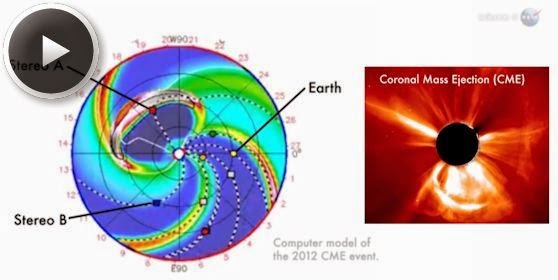 Obviously Earth has not been hit with a large Carrington class event 1859 and that has been just as well.  The chances of been hit is not zero but since we now have detection capability for perhaps a decade and we have seen one major event, the events themselves are rare.  If an event covers one degree of arc and we have a decadal prevalence, then we are facing real probabilities of once every thousand years or so.

We can tighten this up but the mere gap of one hundred and fifty years since the last event tells us that the odds are not so bad at all.

Yet it is foolish to be unprotected when security is easy to accomplish through simple regulatory fiat.   There will be no predictive cycle at all and an event can let rip tonight.

The good news is that our grid system itself is on the verge of obsolesce and that hugely reduces the potential for damage.

The current solar cycle is weaker than usual, so you might expect a correspondingly low-key  meeting.  On the contrary, the halls and meeting rooms were abuzz with excitement about an intense solar storm that narrowly missed Earth.

"If it had hit, we would still be picking up the pieces," says Daniel Baker of the University of Colorado, who presented a talk entitled The Major Solar Eruptive Event in July 2012: Defining Extreme Space Weather Scenarios.

A new ScienceCast video recounts the near-miss of a solar superstorm in July 2012.  Play it

The close shave happened almost two years ago. On July 23, 2012, a plasma cloud or "CME" rocketed away from the sun as fast as 3000 km/s, more than four times faster than a typical eruption. The storm tore through Earth orbit, but fortunately Earth wasn't there. Instead it hit the STEREO-A spacecraft. Researchers have been analyzing the data ever since, and they have concluded that the storm was one of the strongest in recorded history. "It might have been stronger than the Carrington Event itself," says Baker.

The Carrington Event of Sept. 1859 was a series of powerful CMEs that hit Earth head-on, sparking Northern Lights as far south as Tahiti. Intense geomagnetic storms caused global telegraph lines to spark, setting fire to some telegraph offices and disabling the 'Victorian Internet." A similar storm today could have a catastrophic effect on modern power grids and telecommunication networks. According to a study by the National Academy of Sciences, the total economic impact could exceed $2 trillion or 20 times greater than the costs of a Hurricane Katrina. Multi-ton transformers fried by such a storm could take years to repair and impact national security.

A recent paper in Nature Communications authored by UC Berkeley space physicist Janet G. Luhmann and former postdoc Ying D. Liu describes what gave the July 2012 storm Carrington-like potency. For one thing, the CME was actually two CMEs separated by only 10 to 15 minutes. This double storm cloud traveled through a region of space that had been cleared out by another CME only four days earlier. As a result, the CMEs were not decelerated as much as usual by their transit through the interplanetary medium.

Had the eruption occurred just one week earlier, the blast site would have been facing Earth, rather than off to the side, so it was a relatively narrow escape.

When the Carrington Event enveloped Earth in the 19th century, technologies of the day were hardly sensitive to electromagnetic disturbances.  Modern society, on the other hand, is deeply dependent on sun-sensitive technologies such as GPS, satellite communications and the internet.

"The effect of such a storm on our modern technologies would be tremendous," says Luhmann.

During informal discussions at the workshop, Nat Gopalswamy of the Goddard Space Flight Center noted that "without NASA's STEREO probes, we might never have known the severity of the 2012 superstorm.  This shows the value of having 'space weather buoys' located all around the sun."

It also highlights the potency of the sun even during so-called "quiet times." Many observers have noted that the current solar cycle is weak, perhaps the weakest in 100 years. Clearly, even a weak solar cycle can produce a very strong storm.