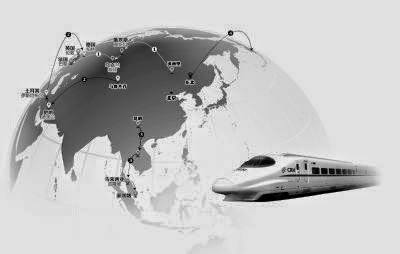 Without question, China is the only regime able to serious tackle this ambitious a project.  Yet their continuing build out of their internal network actually proves capability and serious capacity.  That capacity will need a future market come 2020 and why not the world?

An extended Asian network of track is most attractive, particularly is they shoot a branch down into India and into Africa.  There are serious potential markets all along these corridors that would naturally blossom.  Again it is necessary to target the low hanging fruit like Europe, Africa and India.

A Bering route is a difficult proposition at best and better for freight haulage perhaps.  I personally think even that has better ways.

Yet in the long haul, we will do it anyway unless we come up with a container sized wormhole first.  Which I no longer dismiss as impossible either.


China would be building a high a global high speed rail network where the lines lead to and from the middle kingdom.


The Pan Asian line is funded and being built and will bring South East Asian economies closer to China.


China can afford to do it and the connections would be more powerful than any negotiated trade deal. It would be increased physical access.


China is adding a new $10 billion credit line for Africa on top of the existing $20 billion already offered. China will boost the China-Africa Development Fund by $2 billion, bringing it to a total of $5 billion


Chinese Premier Li Keqiang depicted a dream that all African capitals are connected with high-speed rail, so as to boost pan-African communication and development


Li's trip, which also takes in oil-rich Nigeria and Angola, would not simply be for energy deals and Beijing will be seeking to help boost African living standards.


Li said he hoped that some of the loans being offered would be used to support small and medium-seized companies in Africa, adding that economic development on the continent offered huge opportunities for both China and Africa.


Trips by Chinese leaders to Africa are often marked by big natural resource deals, triggering criticism from some quarters that China is only interested in the continent's mineral and energy wealth.


The state-run Beijing Times newspaper reports of a proposed high speed rail line that would begin in north-east China and run up through Siberia, pass through a tunnel underneath the Pacific Ocean then cut through Alaska and Canada to reach the continental US.


Crossing the Bering Strait in between Russia and Alaska would require about 200km (125 miles) of undersea tunnel, the paper said, citing Wang Mengshu, a railway expert at the Chinese Academy of Engineering.


"Right now we're already in discussions. Russia has already been thinking about this for many years," Wang said.


The project – nicknamed the "China-Russia-Canada-America" line – would run for 13,000km, about 3,000km further than the Trans-Siberian Railway. The entire trip would take two days, with the train travelling at an average of 350km/h (220mph).


NBF - China's fastest test trains can go about double this speed and low air pressure tunnels could further boost the speed. If the line were built it could be upgrade for one day or even twelve hour or less travel times.


The reported plans leave ample room for skepticism. No other Chinese railway experts have come out in support of the proposed project. Whether the government has consulted Russia, the US or Canada is also unclear. The Bering Strait tunnel alone would require an unprecedented feat of engineering – it would be the world's longest undersea tunnel – four times the length of the Channel Tunnel.


According to the state-run China Daily, the tunnel technology is "already in place" and will be used to build a high-speed railway between the south-east province of Fujian and Taiwan. "The project will be funded and constructed by China," it said. "The details of this project are yet to be finalised."


Line: From London, via Paris, Berlin, Warsaw, Kiev, Moscow, after over two branches, one into Kazakhstan, another virtual point of the Far East Khabarovsk, after entering the territory of China Manzhouli


Process: Domestic segment has already started, is still being negotiated outside the lines


Line: The starting point is Urumqi, through Kazakhstan, Uzbekistan, Turkmenistan, Iran, Turkey and other countries, and finally to Germany


Process: Domestic segment is advancing, still being negotiated outside the lines


4 Russia plus the United States and high-speed rail


Line: starting from the northeast all the way north through the Bering Strait in Siberia arrived to build a tunnel way across the Pacific Ocean, arriving in Alaska, and then go from Alaska, Canada, the United States finally arrived


And then to Africa, Premier Li Keqiang visited each force will recommend to the local Chinese high-speed railway from Thailand to Eastern Europe. Technically sound, mature operating experience, quality and security, cost-effective, enjoys a good reputation in the international market ...... May 5, at the China-aided AU Conference Center, he enumerated the advantages of Chinese high-speed rail to the five African leaders.


In the name of such a high level of "high iron salesman" behind, is five years China has launched high-speed rail "going out" strategy. This is a big game.


According to the "Southern Weekend" previously disclosed, the planned Eurasian high-speed rail from London, via Paris, Berlin, Warsaw, Kiev, Moscow, after over two branches, one into Kazakhstan, another virtual point of the Far East Khabarovsk Trask, Manchuria after entering the territory of China.


With conditions similar to the Eurasian high-speed rail, high-speed rail in Central Asia is also not completely settled. The starting point of this railway line is Urumqi, after Kazakhstan, Uzbekistan, Turkmenistan, Iran, Turkey and other countries, and finally to Germany. Coincides with the ancient Silk Road.


Yesterday, Wang Meng-shu in an interview with Beijing Times reporter interviewed introduction, Pan-Asian high-speed rail should start in June this year, from western Yunnan Diamond Hill built an approximately 30 km of tunnels leading to Myanmar, from Burma to the east, out of a branch line to to Thailand, and the other is via a main line Laos, Vietnam, Malaysia, Singapore leads. This will become China's leading high-wire Southeast Asian countries a convenient channel.


Wang Meng-shu told reporters that the current high-speed rail and Central Eurasian domestic high-speed rail segment or have started, or are pushed outside the line in negotiations on how to build it. Go north on Western Europe via the Eurasian high-speed rail line, since the need to go through Russia, China advocates the use of internationally accepted standards of 1435 mm track, but the Russian railway network has been using quite different from the international standard 1524 mm broad gauge, connect the not yet settled.

The replacement of resources through the construction of high-speed rail

Wang Meng-shu, currently planning several of these cross-border high-speed rail are referring to this concept in the negotiation and operation, through the "replacement of existing resources" approach, on the one hand to promote connectivity between China and neighboring Asian countries to facilitate trade between countries, the other hand, imports from China in order to protect scarce resources, which will help the oil, gas flow.


Wang Meng-shu introduction, the construction of these three high-speed rail lines, China is not only responsible for surveying, planning, design, construction, and will ensure that after completion of operations, personnel training. According to Wang Meng-shu, at present there is a regular train from Zhengzhou to carry exploration equipment and technical personnel destined for Central Europe and other regions of the high-speed rail line through the area for exploration may negotiate with the relevant countries are being conducted.


For the "replacement resources with high-speed rail technology" of cooperation, the relevant person in charge of the Ministry of Railways had to accept the "Southern Weekend" interview, he explained: "China is another country to build high-speed rail, the money to get money, get money exchanged for something else This is a fair way to trade. "


Vision for the future - Canada and the U.S. and Russia begin high-speed rail plan


Wang Meng-shu also mentioned that China is considering the construction of a railroad through Siberia, across the Bering Strait to Alaska directly, through Canada to the United States from China in the future so that you can take the train to the United States.


Wang Meng-shu introduction of the railway in Northeast China's departure from the way north through the Bering Strait in Siberia arrived, by way of the construction of a tunnel through the Pacific, arrived in Alaska, and then go from Alaska, Canada, the United States finally arrived. "It is now talking about, which is the idea of ​​Russia for many years." Wang Meng-shu said that the construction of the railway across the Bering Strait need to build about 200 kilometers of tunnels, the tunnel leading technology in Fujian Taiwan High Speed ​​Rail tunnel will applications are now technically qualified. The railway will also take the Chinese out of technology, the capital building, and replacement of resources through the country the way forward, this plan is currently under discussion.


Wang Meng-shu said the line preliminary estimate of about 13,000 kilometers, if completed, China to the United States will be able to no longer have to take a plane, take the high-speed rail can be viewed along the multi-country scenery, according to the 350 km / h design speed passenger ride high-speed rail is expected to less than two days walk from the United States.


One is difficult to raise huge amounts of money. Eurasian necessary funds to build high-speed rail will be an astronomical figure, not a Chinese government can afford. Even along the countries are willing to provide some funding for the Eurasian high-speed rail, still unable to meet demand.


The third is still unable to resolve technical problems. Eurasia is the world's largest continent, geological conditions along the Eurasian high-speed rail is extremely complex, both alpine valley insurance also has rivers and lakes, the construction of a complex geological environments across so many high-speed rail is technically faces enormous challenges.
Posted by arclein at 12:00 AM