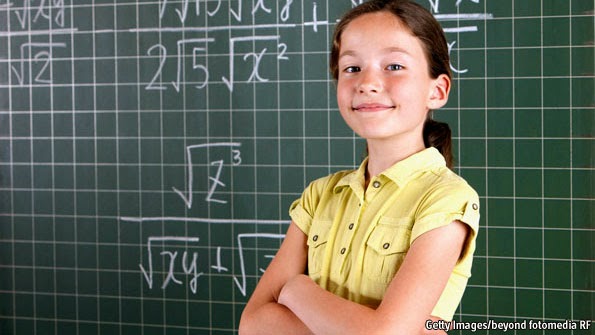 This is obviously a topic on which I have some slight familiarity and am quite aware of the sex differential.  That it has now improved is good news.  Other noted differentials are better ascribed to changes in nurture and the lack of available role models for boys in particular.  Yet genius potential is all about real processing speed.

Your brain must be naturally quicker to start with.

That is still not good enough as I have met many could have been types as well.  Two other things must occur.  The brain must be wired properly through an excellent intense training in mathematics as an adolescent.  Then you also must feed the monkey huge amounts of data and as many ideas as much as possible.  There are other mental skills that can be usefully optimized.  Those include a photographic memory which I do not have but now know how to acquire.

For the bulk of humanity slow but steady works pretty well.

Geniuses are getting brighter. And at genius levels of IQ, girls are not as far behind boys as they used to be

SCIENCE has few more controversial topics than human intelligence—in particular, whether variations in it are a result of nature or nurture, and especially whether such variations differ between the sexes. The mines in this field can blow up an entire career, as Larry Summers found out in 2005 when he spoke of the hypothesis that the mathematical aptitude needed for physics and engineering, as well as for maths itself, is innately rarer in women than in men. He resigned as president of Harvard University shortly afterwards.

It is bold, therefore, of Jonathan Wai, Martha Putallaz and Matthew Makel, of Duke University in North Carolina, to enter the fray with a paper that addresses both questions. In this paper, just published in Current Directions in Psychological Science, they describe how they sifted through nearly three decades of standardised tests administered to American high-school students to see what had been happening to the country’s brightest sparks.

They draw two conclusions. One is that a phenomenon called the Flynn effect (which weighs on the “nurture” side of the scales because it describes how IQ scores in general have been rising over the decades) applies in particular to the brightest of the bright. The other is that part, but not all, of the historic difference between the brainiest men and women has vanished.

The three researchers drew their data from Duke University’s Talent Identification Programme, TIP, which is designed to ferret out especially clever candidates early on: all the participants had scored in the top 5% of ability when confronted with exams designed for much older students. TIP, in turn, draws on three national exams: SAT, EXPLORE and ACT. Altogether, Dr Wai, Dr Putallaz and Dr Makel looked at data from 1.7m children. Those data spanned the years between 1981 and 2010.

In the general population boys are well known to do a bit better than girls in maths. Girls, in turn, edge out boys on tests of verbal reasoning. The result is similar overall IQ scores. Among the best young mathematical brains, however, that equality does not pertain. Here, boys do a lot better at maths than girls—but less better than they used to, as the researchers discovered.

In the early 1980s, the ratio of males to females in the top 0.01% of maths scores in SAT, the Scholastic Aptitude Test, was around 13 to 1. By the early 1990s it had fallen to four to one. After this, however, it remained obstinately unaltered (see chart). The other two tests, both of which post-date the period in which the SAT shows those huge changes, indicate less lopsided sex ratios of between two and three to one. But neither shows girls making much recent progress towards equality.

Nurturing talent
This study is not perfect. Its most interesting result rests on data from just one of the three sets of exams it looked at and its sample sizes are, necessarily, small. But it chimes with the findings of a much older investigation, carried out in 1983 by a group of researchers at Johns Hopkins University, which also discovered a male-to-female sex ratio of 13:1 among the most able young mathematicians.

Why a dramatic rise in the aptitude of America’s brightest young female mathematicians should then be followed by two decades of stagnation is not obvious, and, not being experts in mine-clearance, the researchers offer no hypothesis. It is clear that the rise itself must be “nurture” of some sort—possibly a change in teachers’ attitudes towards girls who are interested in maths—but the subsequent stasis could have either explanation. A line of reasoning in favour of “nature” is that put forward by Simon Baron-Cohen, a psychologist at Cambridge University. This connects the extreme systematising patterns of thought which make a good mathematician with the preponderance of men among those with Asperger’s syndrome, a form of autism that does not harm a person’s general intelligence. But the disparity could equally well be the result of some as-yet-unelucidated difference between the ways girls and boys are brought up.

The nature of the beast

That such unelucidated environmental influences can have real effects on IQ is eloquently illustrated by the Flynn effect. This phenomenon, brought to the world’s attention in the 1980s by James Flynn of the University of Otago, in New Zealand, is that average IQs around the world have been rising at the rate of 0.3 points a year for the past eight decades. Using the TIP data, Dr Wai and his colleagues showed that this is as true of the brightest youngsters in American society as it is of lesser mortals, suggesting that even they can have their abilities boosted by whatever is causing the Flynn effect. Once again, the changes seem to be mainly in mathematics. Scores in the brightest children’s verbal-reasoning and reading abilities demonstrate no clear trend, but all three national tests show sustained improvements in their mathematical ability over the past three decades.

No one knows what causes the Flynn effect. Theories range from better nutrition, via a more stimulating general environment (thanks to such things as television, radio, the internet and video games), to the phasing out of lead in petrol and paint. What is clear is that it cannot be a change in gene-given ability, which is what most people mean by “nature” in this debate, because too few generations have passed for natural selection to have had any meaningful impact.

1. Mate selection (in Darwin's words, "sex selection") can easily drive up IQs over time. This amounts to one or the other (or both) members of a couple selecting their reproduction mate on the basis of intelligence. If people are selecting against lower-IQ individuals as mates, while selecting in favor of higher-IQ individuals, this can drive up IQ much, much faster than classic "Darwinistic selection".

2. Breastfeeding, which has made a strong comeback in the Western world during the past 30 to 40 years, has been shown to have positive impacts on IQ across populations on a genetically modified basis. See, for example:http://www.pnas.org/content/104/47/18860.full.pdf

3. SAT tests have been very substantially dumbed down over the past 4 decades. In fact, the American Mensa organization ceased accepting high-threshold SAT scores as a pathway to gain Mensa membership as of 1994. Prior to that, there was a sufficiently solid correlation between IQ and SAT scores. After 1994 there is not. Thus, SATs are likely not presently doing much by way of measuring the capacities of the very highest ability individuals. In other words, if IQ is not longer very correlated with SATs, this implies that many people can simply be prepared/trained to do well on these exams somewhat independently of their true native ability. (By contrast, the Miller Analogies is likely a far better tool for distinguishing different levels of ability among the very highest IQ individuals.)

4. There are strong indications that a major structural factor at work in male vs. female intelligence is the reality that there are key intelligence-impacting genes on the X-chromosome, of which men have only one while women have two. All female mammals are mosaics with respect to the X-chromosome, meaning that their tissues are a patchwork quilt in which one or the other of their X-chromosomes is turned on (and the other off) in each patch. This creates a situation where it is easier for males to win the IQ lottery if they happen to get a single very strong version of the relevant genes on their X-chromosome. For a woman to have that same gene in all of her tissues, she would have to inherit the rare, very strong allele/s from both of her parents, which is statistically far less likely to occur. Similarly, males are also far more likely to lose this lottery, and wind up mentally retarded, which is where women pick up the dividend of having two X-chromosomes: X-based mental retardation is far less common among women as their risk is diversified by having two X-chromosomes, and thus a good chance of having one more helpful allele on one of their X-chromosomes to offset any harmful allele.