Another World with Arundhati Roy 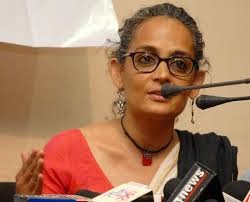 The prescriptions suggested simply will not work because they focus naturally on inequality.  What is so hard to believe and understand is that all that does not really matter at all.  Such concentration merely allows bigger decisions to be made that can be self-sustaining.

What does matter is capitalizing the natural community of one hundred and fifty individuals consistently and fairly in such a way that it is naturally self-governing and prospering.  This becomes impossible if the management of such capital is never internalized.   A distant King cannot know how to optimize the wealth of the thousands of villages.

My principle thesis is that the tools exist to do just that because of modernity itself.  For that reason the future is on the way although not in the way imagined.  Once the base is perfected and operational the rest is easy and again irrelevant.

Another World Is Not Only Possible, She Is on Her Way

Arundhati Roy's trenchant analysis of the destructive impact of global neoliberalism on India is available directly from Truthout by clicking here. Capitalism: A Ghost Story is a passionate, detailed journey through the injustices of systemic inequality.

As an epilogue for Capitalism: A Ghost Story, Roy offers an eloquent tribute to the Occupy movement after it was evicted from Zucotti Park. Despite Roy's scathing analysis of the injustices and ravages of capitalism and its political puppets, she is filled with hope that "another world is not only possible, she's on her way."

Speech to the People's University of the Occupy Movement
Yesterday morning the police cleared Zuccotti Park, but today the people are back. The police should know that this protest is not a battle for territory. We're not fighting for the right to occupy a park here or there. We are fighting for Justice. Justice, not just for the people of the United States, but for everybody. What you have achieved since September 17, when the Occupy Movement began in the United States, is to introduce a new imagination, a new political language, into the heart of Empire. You have reintroduced the right to dream into a system that tried to turn everybody into zombies mesmerized into equating mindless consumerism with happiness and fulfillment. As a writer, let me tell you, this is an immense achievement. I cannot thank you enough.

We were talking about justice. Today, as we speak, the army of the United States is waging a war of occupation in Iraq and Afghanistan. US drones are killing civilians in Pakistan and beyond. Tens of thousands of US troops and death squads are moving into Africa. If spending trillions of dollars of your money to administer occupations in Iraq and Afghanistan is not enough, a war against Iran is being talked up. Ever since the Great Depression, the manufacture of weapons and the export of war have been key ways in which the United States has stimulated its economy.

Just recently, under President Obama, the United States made a sixty-billion-dollar arms deal with Saudi Arabia. It hopes to sell thousands of bunker busters to the United Arab Emirates. It has sold five billion dollars' worth of military aircraft to my country, India - my country, which has more poor people than all the poorest countries of Africa put together. All these wars, from the bombing of Hiroshima and Nagasaki to Vietnam, Korea, Latin America, have claimed millions of lives - all of them fought to secure "the American way of life."

Today we know that "the American way of life" - the model that the rest of the world is meant to aspire toward - has resulted in four hundred people owning the wealth of half of the population of the United States. It has meant thousands of people being turned out of their homes and jobs while the US government bailed out banks and corporations - American International Group (AIG) alone was given 182 billion dollars.

The Indian government worships US economic policy. As a result of twenty years of the Free Market economy, today one hundred of India's richest people own assets worth one-fourth of the country's GDP while more than 80 percent of the people live on less than fifty cents a day. Two hundred fifty thousand farmers driven into a spiral of death have committed suicide. We call this progress and now think of ourselves as a superpower. Like you, we are well qualified, we have nuclear bombs and obscene inequality.

The good news is that people have had enough and are not going to take it anymore. The Occupy Movement has joined thousands of other resistance movements all over the world in which the poorest of people are standing up and stopping the richest corporations in their tracks. Few of us dreamed that we would see you, the people of the United States, on our side, trying to do this in the heart of Empire. I don't know how to communicate the enormity of what this means.

They (the 1%) say that we don't have demands ... they don't know, perhaps, that our anger alone would be enough to destroy them. But here are some things - a few "pre-revolutionary" thoughts I had - for us to think about together.

We want to put a lid on this system that manufactures inequality.

We want to put a cap on the unfettered accumulation of wealth and property by individuals as well as corporations.

As cap-ists and lid-ites, we demand:
One: An end to cross-ownership in businesses. For example: weapons manufacturers cannot own TV stations, mining corporations cannot run newspapers, business houses cannot fund universities, drug companies cannot control public health funds.
Two: Natural resources and essential infrastructure - water supply, electricity, health, and education - cannot be privatized.
Three: Everybody must have the right to shelter, education, and health care.
Four: The children of the rich cannot inherit their parents' wealth.
This struggle has reawakened our imagination. Somewhere along the way, Capitalism reduced the idea of justice to mean just "human rights," and the idea of dreaming of equality became blasphemous. We are not fighting to tinker with reforming a system that needs to be replaced.
As a cap-ist and a lid-ite, I salute your struggle.
Salaam and Zindabad
Copyright (2014) by Arundhati Roy. Not to be republished without permission of Haymarket Books.

Arundhati Roy is an Indian novelist, activist and a world citizen. She won the Booker Prize in 1997 for her first novel The God of Small Things.

Since winning the Booker Prize, she has concentrated her writing on political issues. These include the Narmada Dam project, India's Nuclear Weapons, corrupt power company Enron's activities in India. She is a figure-head of the anti-globalization/alter-globalization movement and a vehement critic of neo-imperialism.

In response to India's testing of nuclear weapons in Pokhran, Rajasthan, Roy wrote The End of Imagination, a critique of the Indian government's nuclear policies. It was published in her collectionThe Cost of Living, in which she also crusaded against India's massive hydroelectric dam projects in the central and western states of Maharashtra, Madhya Pradesh and Gujarat.

Roy was awarded the Sydney Peace Prize in May 2004 for her work in social campaigns and advocacy of non-violence.

In June 2005 she took part in the World Tribunal on Iraq. In January 2006 she was awarded the Sahitya Akademi award for her collection of essays, 'The Algebra of Infinite Justice', but declined to accept it.
Posted by arclein at 12:00 AM