Clairvoyance, Divination and the Great Work 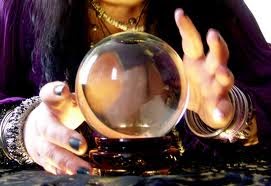 We know for sure that we have a lower consciousness that does remarkable things like send us up a tree upon encountering a grizzly without the conscious fore mind allowed to interfere at all.

Thus the whole topic of clairvoyance already has a proven physical basis that handily covers much of the field quite well.  It also tells us that our automatic systems do exploit connectivity we still cannot properly describe and locate in the brain.

After we put that aside, we then return to the problem of consciousness and yes we must learn to listen.  The information comes in undigested and easily misunderstood but I am seeing more and more admitted evidence of this phenomenon.  The hard part is setting aside traditional explanations nicely rooted in a spiritual paradigm that works well enough but also distracts.

Take the example of what is known as ‘crisis apparition’ – when a person undergoing a sudden emotional trauma (such as death or a violent accident) manifests in another place to someone who is emotionally in tune with him or her. (There have been many confirmed cases of this in wartime, when a woman has ‘seen’ a husband or son at the moment when he is killed in action.) In the strict sense, a clairvoyant might see the person standing in the room; a clairsentient might feel a familiar hand on the shoulder; and a clairaudient might hear the familiar voice. For simplicity, I will use the word clairvoyance to cover all these forms.

Precognition is also a form of clairvoyance, when the event perceived lies in the future. Divination is ‘clairvoyance using tools’ – that is, with the aid of Tarot cards, a pendulum, the yarrow sticks or coins of the I Ching, rune stones, molten lead poured into water, tea-leaves or any other physical accessory. Scrying is the use of a crystal ball, a pool of ink, a concave black mirror or any other device for defocusing normal vision, to aid clairvoyance in the strict sense.

To a certain extent, the physical aids used in divination work as triggers to the intuition. The person using them makes contact with intuitive awareness which is hidden in the Unconscious by offering it something onto which it can project that awareness in the form of images or symbols, which an experienced diviner can then interpret. Such triggers are useful devices for bypassing the censor which stands on the threshold between Unconscious and the Ego. This censor is a necessary element in the psyche, because without it the Ego-consciousness would be overwhelmed by a flood of incoming data; it enables the Ego to focus attention selectively, which is the essence of consciousness. But in the unintegrated psyche, the censor is rather a rough-and-ready mechanism. With expanded awareness, and improved communication between Unconscious and Ego, the censor becomes more helpfully selective; and what the experienced diviner is doing (whether consciously or not) is instructing the censor to let through intuitive data relevant to the problem in hand.

This triggering process is the main feature of such divinatory methods as gazing at tea-leaves or at molten lead which has solidified in water, or the ancient Roman method of examining the entrails of a sacrificed bird or animal. Scrying, too, is a triggering process; the scryer’s defocused eyes and light-trance mind are in a suitable state for visualizing what the censor is letting through. The physical action or ritual involved – whether it is the swirling and draining of a teacup or the arranging of a crystal ball in suitable light – also becomes, with use, a triggering-signal, inducing the right state of mind and inviting the Unconscious to communicate.

The unconscious resources which the diviner or clairvoyant is tapping are far wider, in the occult view, than those of the individual Unconscious as envisaged by Freudian psychology. Jung came much closer to the occult concept with his teachings on the Collective Unconscious, though he carefully limited those teachings to deductions from his experience as a clinical psychologist. But unlike Freud, Jung was a man with a very open mind, and one senses that he knew perfectly well that there were vast fields yet to be explored. His writings on synchronicity reveal this.

Occultists see the Unconscious itself as clairvoyant and telepathic. The Personal Unconscious, for a start, contains the buried memories of all the individual’s past incarnations. And as a unique outcrop of the Collective Unconscious, it has potential or actual communication with other outcrops, with the Personal Unconscious of other human beings – and also potential access to the Akashic Records, the astral ‘recordings’ of everything that has ever happened. ‘Reading the Akashic Records’ is an advanced technique, of which only adepts have real mastery; but every clairvoyant does it in flashes (as we probably all do without realizing it, from time to time).

So the clairvoyant or diviner is not just asking his or her Unconscious: ‘Tell me the things which I have forgotten or only subliminally noticed.’ He or she is asking: ‘Lift the veil on the things I need to know – whether they are buried in my own subliminal awareness, in my or other people’s incarnation memories, in or via the Collective Unconscious or in the Akashic Records.’ The more skilled and confident one becomes, the more clearly the Unconscious answers.

The Ego and the Unconscious can be likened to a farmer and his dog. The dog, like the Ego, is far more acutely aware of his immediate surroundings than the farmer. His physical senses are much sharper, and he is primarily absorbed in what those senses have to tell him. The farmer, on the other hand, has sources of information which are incomprehensible to the dog. He knows that more sheep will be arriving tomorrow because he has arranged it by telephone. He knows that his neighbour has put up an electric fence, which the dog has to learn about by painful experience. He knows that the dog must have an injection because the vet has warned him that there is parvovirus in the area. He knows that his sheep must be moved off a particular piece of rough grazing because work is due to start there on a new bypass. All these things affect the orders he must give to his dog, and some of those orders may puzzle the dog, because the data on which they are based are outside his awareness-capacity. The farmer knows friends from enemies; but all the dog can do is bark at strangers till the farmer has categorized them for him.

If the dog fears and resents the farmer, their co-operation will be forced and minimal. But if there is love and trust between them, so that each can contribute his own special kind of awareness, their co-operation can be extremely harmonious and efficient. Similarly, the Unconscious has sources of information of which the Ego knows nothing. And the sooner the Ego realizes this, and co-operates with that which it cannot directly apprehend, the better the team (which is the total psyche) will work.

This communication of the Ego with the Unconsciousness is what alchemists and occultists have called the Great Work. Aleister Crowley at first called its aim ‘the knowledge and conversation of one’s holy guardian angel’, and later ‘the knowledge of the nature and powers of one’s own being’. Geoffrey Ashe, in his novel The Finger and the Moon, speaks of ‘the idea that a guardian angel, a spirit-watcher, a higher self as it were, does hover near each one of us’ and ‘is linked with the conscious mind through the Unconscious’. But he suggests a simpler hypothesis:

‘The Unconscious, so-called, and that other self are the same. Or rather: what Freud and Jung found in each person’s psyche, beyond the reach of waking awareness – what they therefore called “subconscious” or “unconscious” – is really an aspect of the life of another being within him, another self from which the ego has split off, but which is still there, still active, still thinking, still in its own way conscious. Viewed under a different aspect, that inner being is also the guardian angel. Scientists may be right when they contend that you and I (meaning what those words commonly mean) have no preternormal powers. But we each carry within us an allied being who has. That is why occult phenomena continue to happen … The first step is to think of your mighty invisible companion as present, inside you. And the first commandment which follows is: LISTEN, LISTEN TO THAT COMPANION.’

This commandment is the secret of clairvoyance and divination. For most people, the best way of learning the art is to start with divination of some kind. The presence of the ‘tools’ (Tarot layout or whatever) helps to give one confidence; it offers one something concrete to interpret, and thus primes the pump of the intuition. One tries an interpretation, and with increasing practice one begins to realize that genuine information is coming through, and confidence is further reinforced.


Julian Websdale is an independent researcher in the fields of esoteric science and metaphysics, and a self-initiate of the Western Esoteric Tradition. His interest in these subjects began in 1988. Julian was born in England, received his education as an electronic and computer engineer from the University of Bolton, served in a Vaishnava monastery during 2010, and has travelled to over 21 countries. Julian is also a member of the Palestinian Solidarity Campaign.
Posted by arclein at 12:00 AM